Wolfhounds – mestizos born as a result of crossing a wolf and dog breed German shepherd. Despite the fact that hybrids of wolves and dogs have been serving faithfully for hundreds of years to a man, the breed Volkosob became known relatively recently – in early 2000s. The hybrid of the wolf and the dog, which later became known as a wolfhound, was bred at the Perm Institute internal troops. There are cases when wolves did not interbreed. only with German shepherds, but also with Alaskan Malamutes, Siberian husky, West Siberian husky and other large dog breeds, but only two breeds are officially recognized – wolf Sarlos dog and Czechoslovakian wolf dog (both breeds arose due to crossing a predator with a German shepherd). Wolfhounds do not recognized by the International Cynological Federation, however the breed There are many fans. The main distinguishing feature of wolves is that in the presence of excellent physical health, stamina, wolf instinct, they have obedience and dog loyalty. The appearance of the wolf breed is very similar to the wolf, the coat is thick, with undercoat, color varies from light to dark gray or brown, black. Wolfhound growth ranges from 60 to 70 cm, the weight of mestizo is 30-50 kg. These animals are distinguished by developed musculature, are taut, high on legs. The head of the wolf is decorated with medium-sized erect ears, eyes almond-shaped amber or light brown shade. An ignorant person can easily confuse a wolfhound with an ordinary wolf – they are so similar in appearance. This breed requires special training and the presence of a competent owner who gives himself the report is that he bailed a dog combining the features of a predator and pet. Wolfhounds even in 3-4 generations may have characteristic wolf traits, to be distrustful of a person and somewhat aggressive. That’s why such a breed is most often used for military service – hardy, cunning, with a sharp sense of smell (it is believed that the scent of a wolfhound is 6 times higher than the scent of dogs of others breeds), weather-tolerant animals, trained and trained by experienced professionals. Legends about the sharpness of fangs wolves, which can become a lethal weapon on occasion. One of the distinguishing features that betrays the kinship of these animals with wolf – they rarely cast their voices, but on occasion can howl. 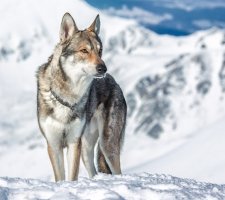 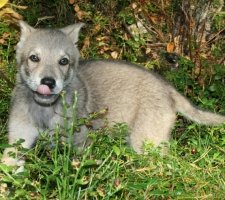 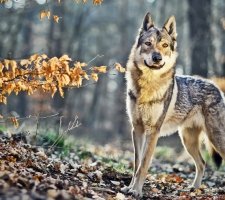 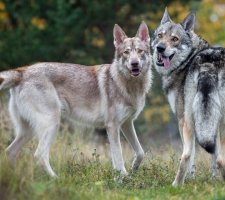 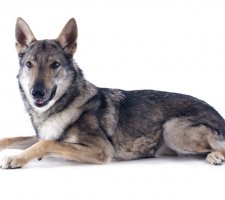 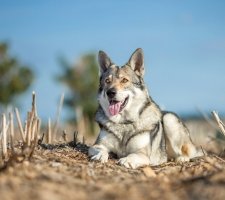 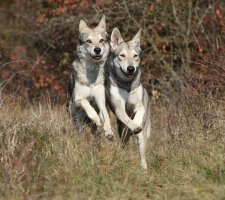 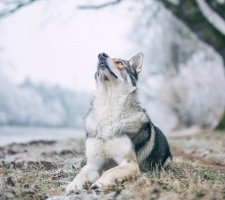 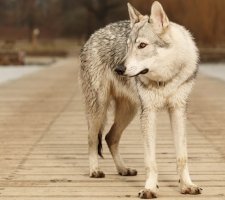 Photos of dogs of breed Volkosob |

There are many facts when dogs crossed with wolves, after which unusual offspring appeared. First mention of hybrids appeared at least 10,000 years ago when presumably the domestication of wolves. There is an opinion, that some wolf individuals independently adjoined people, not afraid of them and treating kindly. Further mating closely related animals could subsequently lead to a new family of canids, their main task was participation and help man during the hunt. Much later in breeding mestizos dogs and the wolf received a huge number of breeders. And more often all all attempts to get restrained, courageous, strong an animal combining the features of a domestic dog and a predatory wolf ended in failure. This was due to the fact that the cubs were too aggressive, and sometimes cowardly, unstable psyche, practically did not give in to training. Besides In addition, multiple anomalies were observed in the bred individuals. development that does not allow them to become real hardy official or working dogs. Today there are about a dozen officially unrecognized breeds that appeared by crossing dogs of various breeds and wolves. If we consider the wolf species in quality of the breed, the founders are Perm military institute that since the second half of the 90s of the 20th century began to study the behavior and habits of wolves. Suitable for breeding with dogs there could be only those individuals that tolerant to the person. It is believed that among all no more than 5% of animals can be successfully predators of the genus wolves crossed with dogs. The remaining 95% are extremely distrustful, aggressive, unpredictable. It should be noted that in most cases for breeding offspring uses the connection of male-wolf and female-dog. But Perm cynologists managed to get the first offspring from another union. In 2000, a mating wolf named Naida and male German shepherd named Baron. Such a union has become possible since Naida was brought up from childhood by a hunter who instilled her those qualities that are inherent in a pet, not wild. The she-wolf, even having matured, remained positively inclined towards people. The man who raised Naidu subsequently transferred it to specialists Perm Military Institute, in whose nursery and contained the future the “father” of the wolfhounds is the black dog Baron, obedient and adequate. IN the first litter in 2000, 5 puppies were born. Of the 4 survivors subsequently only one wolfhosman showed good results in service time at customs and border. The remaining animals were observed a pronounced feeling of mistrust in a person, fear of new tests, equipment, etc. In the blood of the first litter 50% of wolf blood levels were observed. In 2001, the next mating of Naida with the Baron, after which 5 were born puppies, and only one of them was distinguished by a friendly attitude to people, succumbed to training, but had a very independent and dominant character. Subsequently, in 2003, the wolf Naida was crossed with a male from the second litter, and new puppies already had 75% wolf blood. Surprisingly, the puppies of the third litter were much bolder than the previous ones, perfectly coped with the set tasks, people didn’t dare, they easily carried out commands. From dogs wolves were distinguished by excellent health, great physical by force, the most acute sense of smell. Subsequently perm several generations of wolf-breeding specialists were bred by specialists. On today an experiment on the development of a hybrid in Perm military institute is considered closed. However there are nurseries in the territory of our country, engaged in breeding of wolfhounds. The cost of a puppy starts from 15,000 rubles and above, and depends on percentage of wolf and dog blood, nature and the age of the animal. The most commonly purchased mestizos of the wolf and German shepherd for service in law enforcement agencies.

Even under the watchful supervision of specialists from crossing healthy and morally stable wolves and dogs can be born unnecessarily aggressive or shy puppies that are unlikely to be re-educated in the future. But if we consider the “successful” hybrids, then wolves are extremely intelligent animals, their flair, inherited from a wild beast, as a rule, very rarely fails during execution of search work. Wolfhounds are not only smart, but and often dominate the owner. That’s why to build the right relationship between the owner and the animal must be bright Demonstrate that it’s the owner who dominates the ward, but not the other way around. Wolfhounds, like wolves, choose their leader and obey him strictly. If for any reason the owner of a mestizo has no leadership qualities, a wolf breed can become uncontrollable, not recognizing and not listening soft in nature person. With proper upbringing, wolves are loyal to people obedient, but never seek out and humiliate their own dignity. They are very tolerant of cold and bad weather, relatively unpretentious in food, hunger if necessary dull and the wolf-dog is able to overcome hundreds of kilometers, while a regular dog on an empty stomach will not pass a couple of dozen. Despite living next to a person, wolf ways are quite justifiably used as service dogs. A wish inexperienced dog breeders have such a breed often ends tragically – both for the wolfhound and for the failed owner. These animals are not suitable for keeping in apartments, as they need an experienced dog handler, they get along very poorly with other animals. Perhaps in this case the saying is appropriate: “No matter how much you feed the wolf, it’s still looking into the forest.”

Wolfhounds must be kept outdoors, preferably the presence of a large aviary and a warmed booth. Despite the beautiful wolves in both heat and cold should be provided an animal with housing that will not be in a draft and will give a shadow in sunny weather, and during frosts will protect from hypothermia. The territory of the site on which it will reside the animal must certainly be fenced reliable and high by the fence. There are no special requirements for caring for such a dog. Provided – timely feeding, the presence of clean water. Care for hair consists in periodic combing (especially in spring and in the fall, that is, during molting). Bathing Wolfhounds should carried out no more than 2 times a year. Owner should contact attention to the general condition of the dog – clean ears, eye health, shade of mucous membranes. Dogs of this breed should not be put on a chain, since the restriction of freedom is fraught with the appearance of aggression not only to outsiders, but also to their own master. It can be concluded that the basic conditions for keeping a wolfhound are not at all carrying out manipulations to care (washing, cutting nails, combing), the main thing is to build the right relationship with the animal, to achieve his early socialization, to do everything possible to him wolf habits were for the benefit of man.

Wolfhounds are acquired in most cases for official dog breeding, therefore they are trained and trained top-level professionals with considerable experience. Training Wolfhounds is based on special methods that motivate obedience to the person, the execution of commands. It is noted that these animals very quickly grasp the skills they instill. For education of an obedient and loyal to people beast follows from an early age to engage in educational work of the Volkosob. One of distinctive features characteristic of a hybrid of a wolf and a shepherd – they very quickly get used to new people, which allows the need to change several owners, and all of them will listen strictly (subject to proper construction relationship).

In terms of health, wolfhounds are significantly superior to large dogs rocks. For them, most often uncharacteristic of the disease, which affect German shepherd dogs (hip and elbow dysplasia joints, eye diseases, digestive tract problems and other). Dog handlers note that wolves are in need of medical aid is three times less likely when compared with dogs of other breeds. There are frequent cases when the life line of these dogs exceeded 20 years, and sometimes 30, and until very old mestizos did not lose clear vision and scent, participated in the search, guarded border zones, that is, remained afloat until their last days. Good feeding, preventive examinations at the veterinarian and measures to eliminate and prevent invasive diseases – the main moments that allow wolves to be healthy for many years.