The owners of these cute creatures are sure that these are the most friendly, funny and positive doggies with a pleasant character. In addition, the Japanese Spitz has a striking appearance and developed intelligence. Despite the relative youth of the breed, she has fans around the world, although inferior in popularity to some species of spitz-shaped dogs.

Researchers have not yet been able to accurately determine which breeds became the progenitors of Japanese Spitz, but most tend to that they were German dwarf spitz or Samoyed huskies. The first attempts to breed a new breed date back to 1920, then Japanese breeders set to work using the best individuals exported dogs. At that time, they applied the knitting technique between representatives of different breeds.

Later, for the crossing began to use German Spitz, whose pedigree qualities were well established by then. On the final stage was the blood of the esque. When World War II the war ended, the breed standard was set by the breeders. After a couple of years, representatives of a new breed in their homeland were unusually popular, at the same time many individuals were exported for the borders of the country.

In 1964, the breed was recognized by the International Cynological Federation, and after 13 years – the English Club. But it turned out to be more and more difficult with the American Kennel Club, here still the Japanese Spitz is not recognized as a separate breed, as its representatives are too similar to the American Spitz. Although a number of US associations have included it in their registers.

Description of the breed Japanese Spitz

The people call these charming snow-white dogs Japanese dwarf spitz, but this is not entirely true. Japanese Spitz is much larger than pocket decorative doggie, he is full-fledged companion, strong, active, flexible, good trainees.

Since miniature dogs are more valued today, some sellers are cunning and offer for sale a variety of breed “mini”. However, this does not exist in Japanese Spitz – the height of purebred individuals varies within 30-38 cm.

As for body weight, it doesn’t regulated by the standard, the average weight of the dogs is 5-8 kg, but also a 10-pound “miniature” doggie, if he complies with standard requirements, will be recognized. Usually females are smaller than males and differ in smaller features muzzles.

The standard describes the following description of representatives breeds:

The outer hair is mostly straight, soft to the touch, due to thick, not very dense, but voluminous undercoat rises up. The muzzle, ears and front of the body are covered with a shorter with hair. On the tail, collar and limbs, the hair is lush.

The representatives of the breed have one color – snow-white, the presence of speckles, marks, any shades of wool is considered serious flaws. If a Japanese Spitz with red hair is offered for sale, then, most likely, this is a German (Pomeranian) spitz.

Japanese Spitz – a cheerful and friendly dog, very contact, quickly attached to the owner. She is limitless devoted to its owner, affectionate and complaisant. With other members A charming pet’s family also quickly finds a common language.

Doggie gets along well with children, but also does not become a caring nanny. However, he will not show aggression, even if the baby is too is familiar to him.

Sooner or later, the owners of the “Japanese” will notice one feature – these dogs are laconic and practically do not bark. Some of the hosts such behavior can alert, scare others – is not sick favorite. But such a dog can bark only if she is very afraid. In other situations, de your emotions in other ways.

The representative of the breed is a real “zinger”, he saves their activity and playfulness throughout life. Doggie will be happy play at home, outdoors, during a trip to the countryside or ordinary walks. Japanese Spitz is not in conflict and very friendly to brothers. And since he has no hunting instincts, then the dog gets along well with other pets – with cats, rodents and other animals. 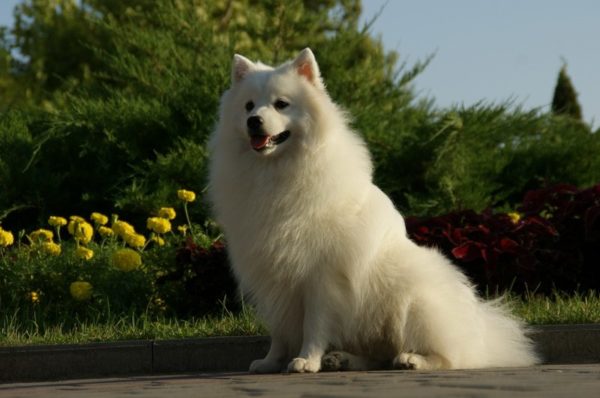 As soon as the Japanese Spitz crosses the threshold of the house, he immediately becomes a universal favorite. Without attention a person is sad, not suffers a long loneliness and is glad when they play with him, talk, caress.

How to educate and train Japanese Spitz

Do not think that this small and flexible doggie is not requires education and training. From the first day, the baby should know place, have food bowls and own toys. AT puppy doggie overly playful and restless, can to be stubborn, to be intrusive. Therefore he needs communication, train and train your pet through games.

“Japanese” is very touchy, do not insult a little pet or to be dismissive – he will definitely feel it. Train the Spitz, as larger representatives of the canine the world, paying much attention to the process, is not necessary. But doggie is everything he must learn the basic commands so that he does not start in the house to rule.

The best incentive in raising such a dog is delicious, but do not be too zealous so that the pet does not gain too much body weight.

How to care for a fluffy pet

Care measures include a number of standard procedures: caring for hair, eyes, ears, teeth, claws. Almost all Spitz-shaped dogs, and Japanese Spitz are no exception, possess a luxurious fur coat that will require a mandatory, regular care.

But the “Japanese” she for a long time can save perfect view, so it won’t bring much trouble. Even it rains for several days, and the dog goes for walks, he will still look neat and well-groomed – coat covered with natural impregnation that repels moisture and pollution.

However, the pet still needs to be bathed – once every 2-3 weeks, using special shampoo suitable for this type of coat. Spitz sensitive skin, so you can not use shampoo or soap, intended for people, it can cause allergic reaction and overdry it.

After the procedure, you can apply balm or conditioner on the wool, which will reduce the likelihood of tangles of hair and give it extra shine. Care products are best purchased at specialized pet store.

The pet is wrapped in a terry towel, soaked to get rid of excess moisture. The dried-up fur coat is combed with a comb natural bristles.

If you are not accustomed to the basic hygiene procedures of the puppy, then an adult pet will be indignant and manifest in every possible way dissatisfaction during their conduct. Therefore care for a four-legged friend should start as early as possible.

Pet’s ears should be examined weekly, if necessary. clearing of surplus sulfur and pollution. Spitz eyes washed every day with a cotton pad or cloth moistened with boiled water. Claws of the dog are cut with a special device – a claw cutter, but doggie can be very stressed, so sometimes without help a professional groomer is indispensable.

Another aspect that you don’t want to lose sight of is caring for oral cavity. She is regularly examined for damage. tooth enamel and soft tissue. Even a small wound can cause the pet is in severe pain, and often the owner is at a loss when the pet spoils for no apparent reason and he refuses food.

Japanese Spitz – a real cleanliness, he does not like dirt and very clean. Such a pet cannot live in poor conditions, even if he feels the most tender feelings and affection for the owner.

In general, the breed can be called safe, as it representatives have virtually no genetic diseases. To list diseases that are most common in Japanese Spitz, include the following:

Thanks to modern medicine with genetic tests it is possible to find out whether the animal is a carrier of the damaged gene or not. 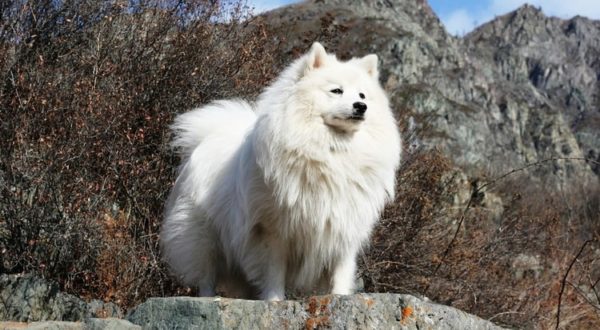 According to statistics, among the breeds with snow-white hair, Often there are individuals suffering from allergies or congenital deafness. However, among Japanese Spitz, this is rather an exception, than the rule. If you take care of your pet properly, spending timely vaccination, deworming, antiparasitic processing, then he can live 15 years or more.

Most breeders tend to feed their wards with high-quality industrial rations. For like Super-premium and holistic class foods are perfect for dogs, having excellent composition and balanced formula.

The menu is selected based on the main criteria: age, health features, the size of the pet, as well as its taste. If a doggie cheerful, cheerful, he has a normal, regular stool, clean eyes and shiny, fluffy hair, so he eats correctly.

If the owner decides to feed the pet with natural food, then it’s important create a balanced diet consisting of the following products:

1-2 times a week, the meat part can be replaced with low-fat boiled sea fish, treat your pet with boiled chicken or quail egg, give cottage cheese or kefir.

No matter what the dog eats – natural food or dry granules, it must have 24-hour access to clean drinking water.

In addition, the diet is considered important. Puppies are fed about 4 times a day, and adults – twice, in the morning and evening time. You can not give snacks between the main receptions food, otherwise the pet will get used to intercepting, refusing to normal food.

Representatives of this breed are not decorative sissies and quite able to live on the street in a spacious aviary. But if physically, a doggie can easily tolerate this, it can get stress due to long loneliness. He needs attention, affection, communication, which is difficult to ensure if the dog is kept outside houses.

“Japanese” does not need an intense load, it is enough for him two-time walks during which it is desirable to have a pet run and play. It will also be useful to lower him from a leash in a safe place, giving you the opportunity to frolic. Spitz – perfect Companion for any trips, walks and jogging. 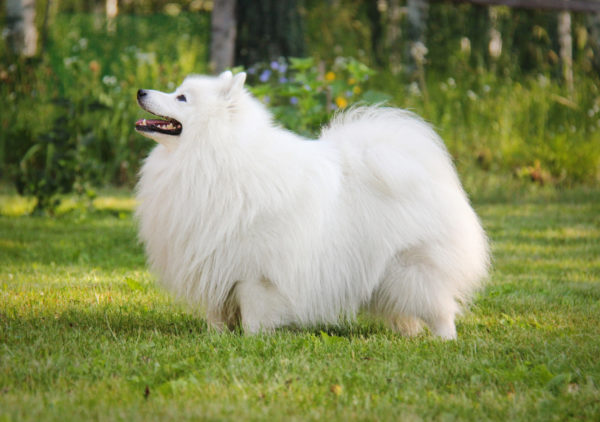 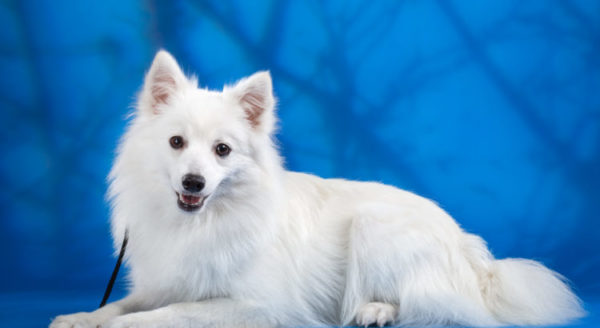 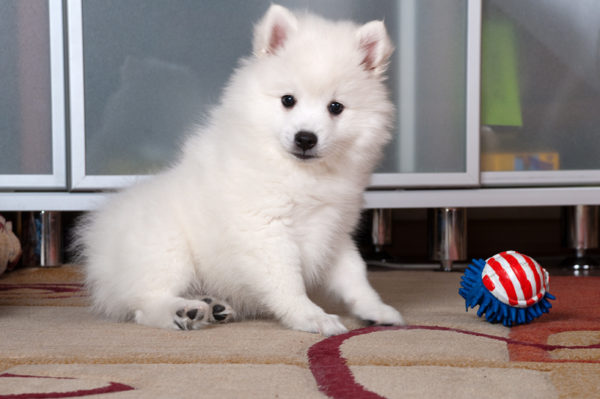 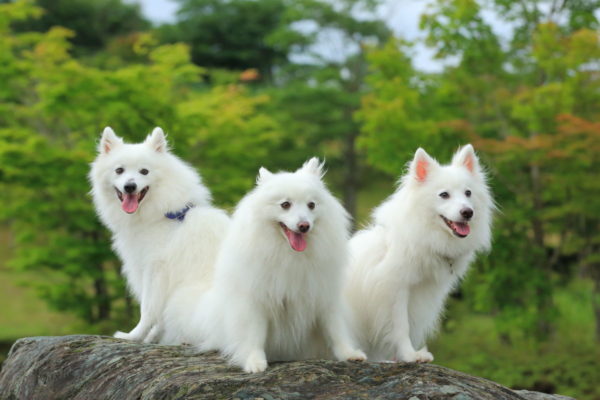 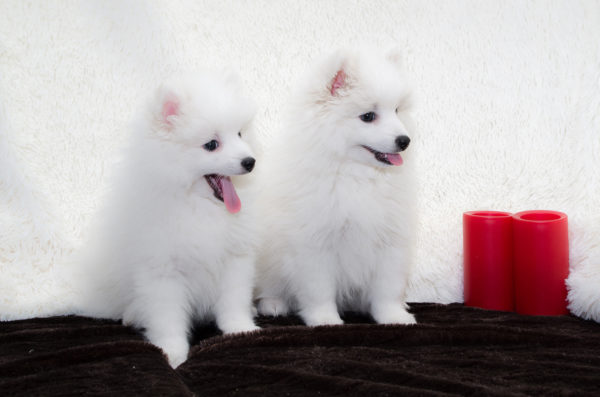 Video of the Japanese Spitz

If the decision to buy a puppy is made, you can start searching suitable seller. But first it’s important to decide for which goals a dog is required – as a pet, without subsequent show career and breeding participation, or the owner implies that his pet will mate and go on exhibition ring.

Such requirements affect the puppy’s price: the lower they are, the the pet will cost less. You can save a lot if to buy a puppy from hand, from random sellers, but the risk is great to get a mestizo or a baby with genetic abnormalities.

The breed is not too common in Russia, but still there is nurseries that specialize in its breeding. Here you can purchase a purebred Japanese spitz with good data. For example, in Moscow there is a nursery “Maho Mirai” (Japanese Spitz) https://www.mahomirai.com/, offering purebred individuals with all necessary documents.

The cost of puppies of this breed varies, depending on class, from 25,000 to 60,000 rubles. For a pet show class, the future champion, you may have to pay even more.

Japanese Spitz – handsome, smart and a great friend. One only his appearance is able to cheer up, and the pet needs reciprocity.