South Russian Shepherd Dog – an undeservedly forgotten pearl domestic dog breeding. Under the appearance of snow-white oversized lapdogs hiding a strong, fast, dangerous dog – sheep breeder assistant. Ideal for conservation and grazing flocks of fine-wooled sheep did a disservice with this beautiful the dog. The reduction in the number of sheep has led to a loss of interest and demand southerners. Today they are few and recognized as one. of the most dangerous dogs.

At the end of the XVIII century. to Tavria at the invitation of Catherine II for the creation of agricultural colonies arrived the Dutch Mennonites, and followed by other immigrants. They brought cattle with them I felt free in the steppe grazing. For protection merino sheep from Spain were delivered shepherd dogs. 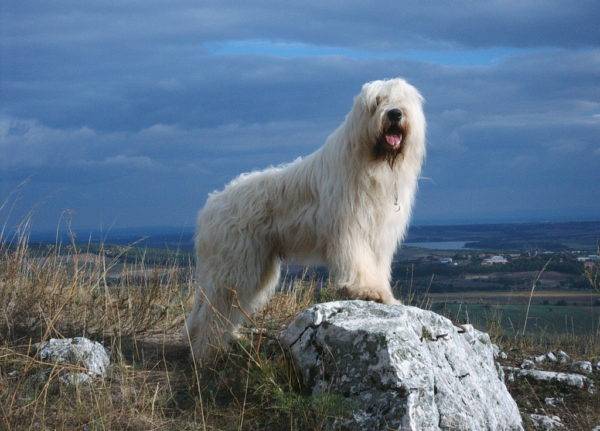 Asturian shepherds could independently manage with a huge herd. Small dogs encountered ferocious steppe wolves and began to lose them in strength and aggressiveness. Then arose the need to breed, which would combine the features Shepherd dogs from Northern Spain and local breeds. Longhair shepherd dogs were crossed with:

Selection was carried out in one of the largest estates – Askania Nova, owned by the grandson of the famous shepherd dog breeder, Baron F. Falz-Fein. The wars that swept through the territory of Ukraine, led to the almost complete disappearance of the breed, and decline sheep breeding – to the unclaimed demand of southerners.

The body of the South Russian Shepherd Dog (URO), covers thick long coat with well-defined undercoat. Wavy strands of the same length throughout the body of the dog make it look like fine-fleece sheep. This sign gave the shepherd dog advantages. 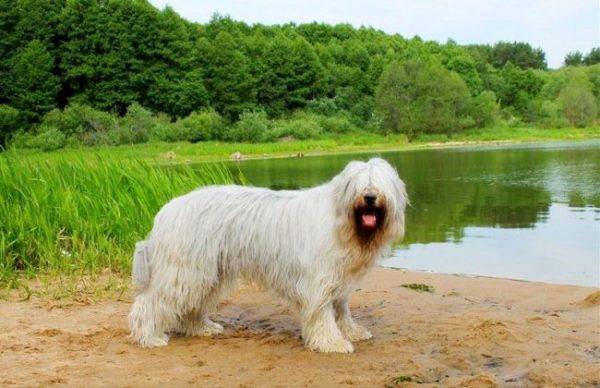 The first standard of the URO was approved in 1931. When it was compiled the “description of typical signs of the South Russian Shepherd” was used L.P. Sabaneeva. Breed standards include:

Allowed for selection dogs that match the specified working qualities. Therefore, YURO turned out to be light and strong, swift and strong. In the description of the shepherd dated 1900 distinctly traced standard southerner. 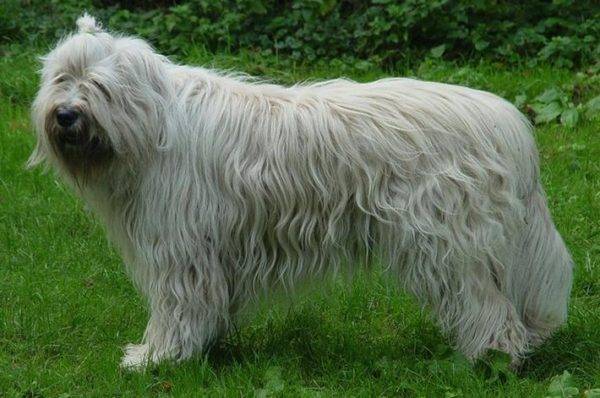 Yuro is a fairly tall dog with a clearly traceable sexual dimorphism – males are larger (more than 65 cm at the withers), and bitches smaller (at least 62 cm). Higher is preferred growth in compliance with the proportions – males 72 cm, and females 67 cm. There are higher specimens (80-90 cm), but in in this case, a spectacular appearance causes the loss of workers qualities.

Despite the large growth, the southerner is quite light. Him weight is 48-50 kg. Thanks to plentiful, long (10-20 cm) wool dog looks more massive. At sight on the “defenseless” and “melancholy” white miracle it is worth remembering that looks can be deceiving.

This shaggy bumpkin in the blink of an eye turns into a “smashing lightning. “Poachers who fall in love with safari on the steppe antelopes Tavria in their “skin” felt the speed and power of the South Urals. Dog easily caught up with the horse galloping and knocked the rider out saddles.

It is wrong to assume that the color of the URO is only white. Typical for shepherd dogs color – various light shades of gray (gray ash, clarified gray, gray with a fawn shade), fawn or dull red (dusty fawn), slightly spotted. The undercoat is grayish, white, reddish. Breed color standards not very diverse, but the gamut color of the coat of South Russian shepherd dogs used to be much wider due to an admixture of blood hounds. 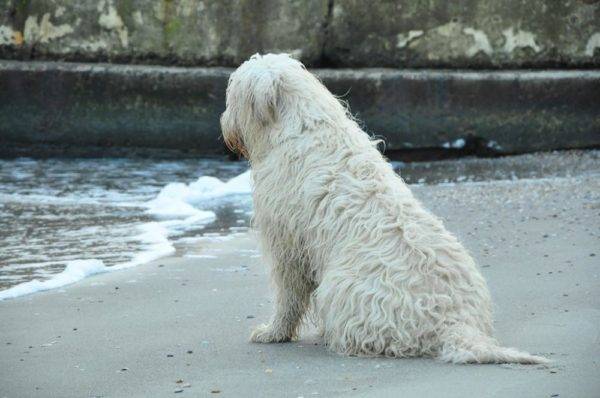 In addition to the above version of the origin of the URO from Asturian Shepherd Dog, there are several more assumptions. By decree Emperor Paul I on the creation of a plant in the Tauride steppes fine-wool sheep, the Spaniards, the Portuguese, the Austrians arrived here, Hungarians – these were experienced shepherds invited by the duke Anhalt-Ketensky for management of flocks of sheep of New Askania. FROM they brought several shepherd dogs among the breeds were:

After the sale of the estate of the ancestor F. Falz-Fein in the guard numerous herds of Askania Nova used Russian shepherds. All these the breeds could not but influence the color of the South Russian Shepherd Dog. AT Description of the standard “Sheepdog” of the beginning of the XIX century. dark gray color named most desired but various shades of white allowed (yellowish, grayish), as well as an almost black color. Wherein other characteristics completely repeated the standards of modern rocks of the URO.

The South Russian Shepherd was bred as a guard dog, a shepherd, and therefore, about any good nature, phlegmatism, humility there could be no speech. Several UROs independently controlled and guarded a herd of 1,500 animals from predators. Yuro possess a passion for hunting, very smart, quickly adapt to changing situations, proactive. 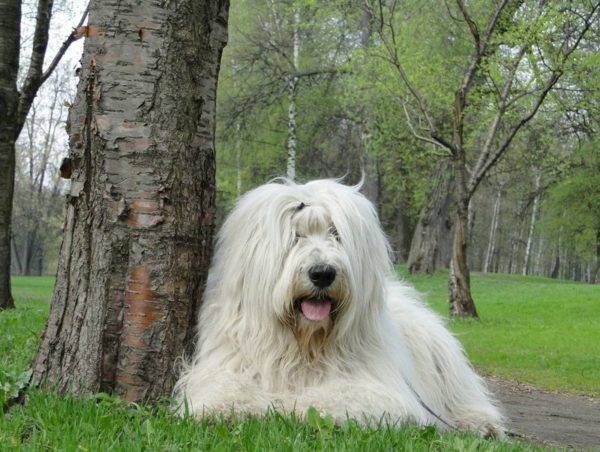 Trained to apprehend the criminals of the URO act according to the situation independently deciding how to more efficiently complete the task. Unlike from service dogs, trained to firmly “grab” the criminal for certain parts of the body, Yuro performs a series of short, swift confused and immobilized throws her.

This breed is characterized by territoriality. The dog will be until the last breath guard and protect your territory. The breed was on the verge disappearances during the First World War and after the revolution, so how dogs continued to selflessly defend against destruction and looting sheep farms. Old Man Makhno even issued a decree everywhere and ruthlessly destroy the South Russian shepherd dogs, prevented the movement of gang members of the Makhnovists through their territory.

The dog recognizes one owner who has established contact with him. TO he treats strangers incredulously, reacts maliciously. The dog will not barking to warn the offender, he attacks swiftly and silently. The willfulness and desire for dominance inherent in the Jurassic do the dog is unacceptable to an inexperienced owner. 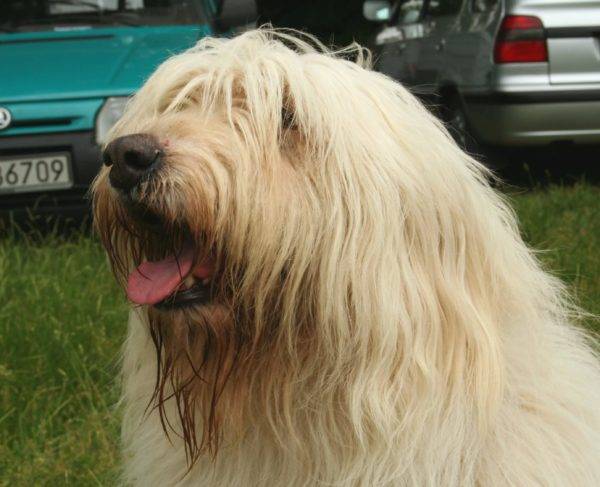 In addition, Jurassic belongs to breeds that do not get along very well with children. The dog does not make an “age discount” and may attack a child who unintentionally hurt him or walked on his territory. Experienced breeders emphasize that with the right upbringing, Yuro controlled, intelligent, loyal to the owner of the dog.

South Russian Shepherd dog lends itself well to training. Clever dog able to remember a large number of commands, which makes it suitable not only as a guard, a shepherd, but also as a search work.

Ability to make decisions independently, quickly respond to changing conditions, stubbornness requires a special approach to training. Hunting instincts and territoriality begin manifest at a young age. Therefore, you need to train puppies, so that the “teenager” does not become aggressive towards everyone and does not impose their leadership to the inhabitants of the house. 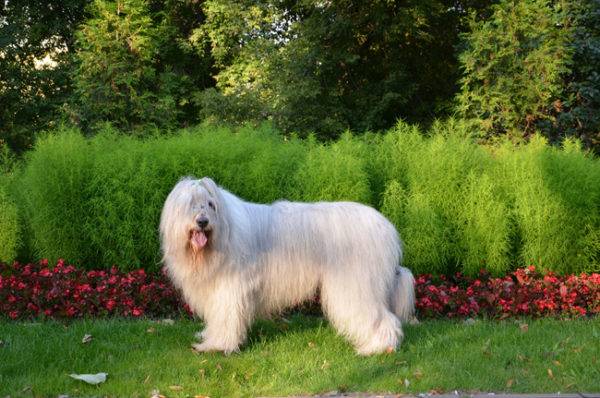 Choleric temperament requires, first of all, development prohibiting teams. It’s better to start learning in a playful way, using the characteristics of the temperament and character of the dog. Required you need to demand the execution of the team, since the “teenage” period in YURO passes very rapidly.

The dog begins to behave aggressively, trying to assert itself, defiantly naughty. During this period, the owner must be firm, persistent, patient, to “keep” leadership and shorten unbridled dog. Missing the “tipping point”, you can get instead of a beautiful and intelligent dog, a huge furry monster.

Care, first of all, requires pet hair. Thick the undercoat is capable of falling into dense felt, therefore you need to regularly comb out a comb with long teeth. The appearance of the coat is a marker of dog health. If he gets everything nutrients, healthy, the coat is shiny. With a disease metabolic disorders, stress, the coat becomes dull, dirty color.

It is necessary to cut the bangs so that the dog can see. Periods shedding requires special care for the coat, which may provide every owner. The output will be professional grooming. Wash the dog necessary at least 3-4 times a year, and in the summer and more often. Also you need to cut the hair on the ears, clean and inspect them, cut claws. 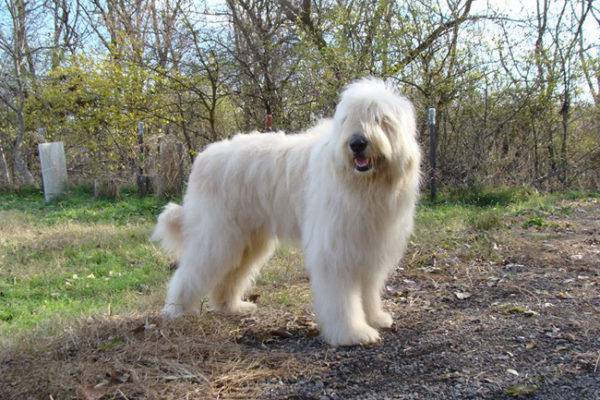 Yuro is a very active dog that requires significant physical discharge. The dog enjoys going on bike rides, he needs extensive walking space. If the dog is planted on the chain, then it will lead to mental trauma and adversely affect on the character of the dog. Therefore, keep the dog in a city apartment, not providing him with physical activity, walks and free movement is problematic.

Yuro – a dog with good health, which, with proper care can live more than 15-17 years. Marked for large breeds of diseases of the supporting system that can be prevented proper physical activity and special vitamin and mineral supplements.

Due to the tight fit of the ears with insufficient care for them otitis media may occur. The dog has strong immunity, therefore it rarely colds, but from other infectious diseases her only vaccinations can protect. 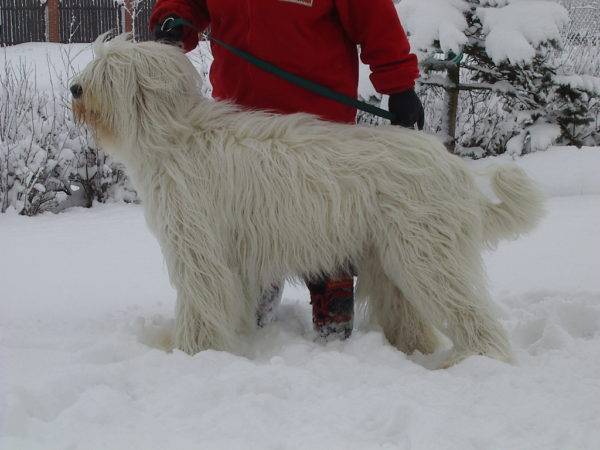 Inherited Ophthalmic Pathologies are found less frequently in the URO, however this does not preclude caring for through the eyes of a dog.

URO may have an allergic reaction, especially to saliva blood sucking insects. Therefore, you need to properly care for with wool and use special anti-flea remedies and tick insecticides.

Since the dog is growing rapidly, he needs a balanced nutrition that dry feeds for gigantic breeds provide. On 1 kg of body weight requires 30 g of dry food and 50 g of liquid food with high in liquid. If the dog “works”, then the norms consumption is rising. An adult URO per day is necessary:

An adult dog can be given large bones with cartilage and meat.

Photo of the South Russian Shepherd 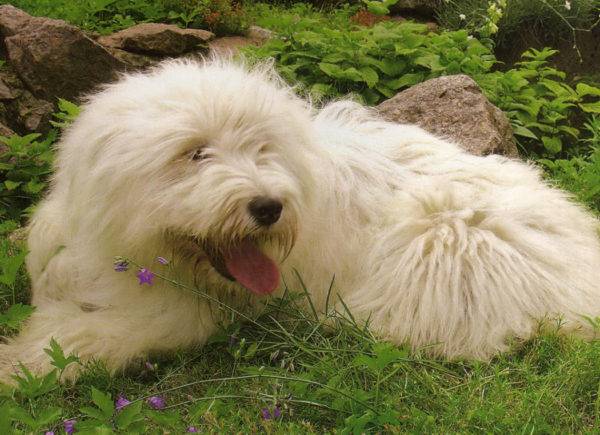 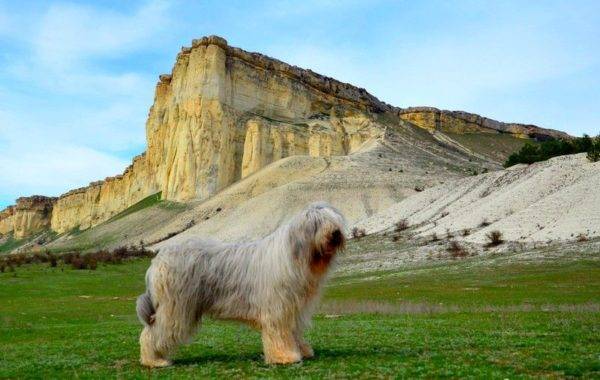 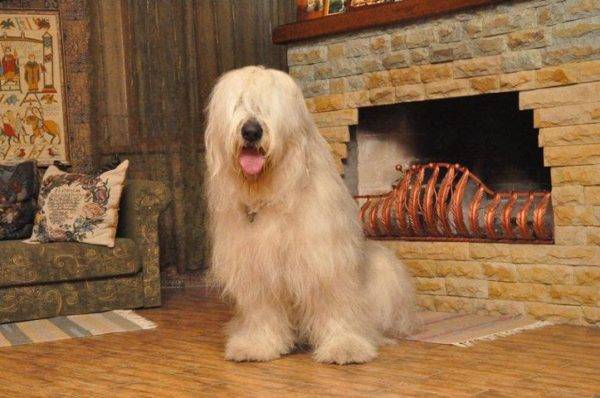 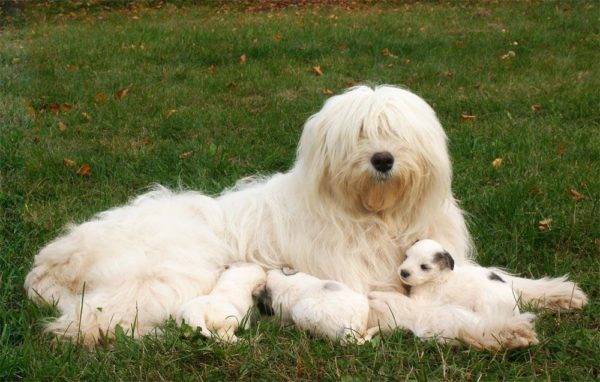 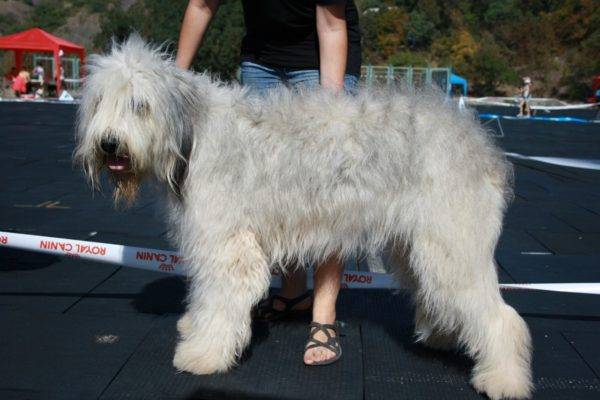 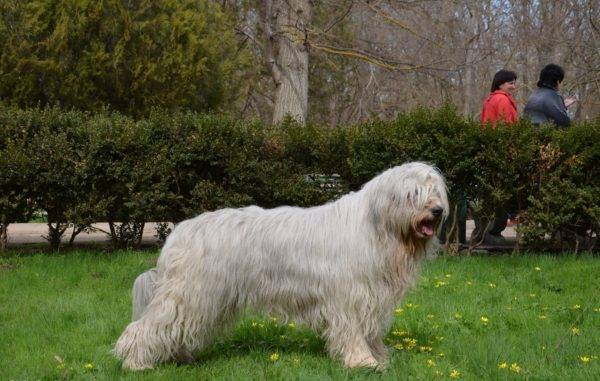 Video about the South Russian Shepherd

Where to buy a puppy

Today there are not many nurseries that breed this breed of shepherd dogs. Departmental breeding of guard dogs engaged in Mikoyan meat processing plant in Moscow. Besides, nurseries in Moscow:

In Kiev, this is the nursery “Blan de Blan” http://blan-de-blan.at.ua/.

In Ukraine, the best nurseries of the URO in Simferopol, Odessa, Nikolaev. Victory of the South Russian Shepherd from the Mikoyanovsky kennel meat factory at an exhibition in Basel contributed to the growth the popularity of southerners in America and Europe. Therefore buy a puppy Today it’s easier abroad than in our country. Especially the price of representatives of this breed are very high.