The name of the breed literally translates as “little lion”. But with this dog has a little lion in common. Shih Tzu is bred exclusively as affectionate and kind companion dog that loves spending time in a room, with family. Recently, however, Shih Tzu has been increasingly takes part in various sports competitions. These dogs described as very beautiful small animals with long hair, which are distinguished by a majestic appearance and friendly character. The growth of females and males of this breed is no different, in on average, it is 20-25 cm, and the weight varies from 4.5 to 5 kg. Dogs of this breed can boast of being courtiers. inhabitants of the Chinese monarchs of the Ming family. The first thing that rushes in the eyes when we see shih tzu – flowing long hair and elegantly tied crest. The appearance of the dog is really pretentious and elegant. The image is truly worthy of kings. Shih Tzu is not can live without the attention of its owner, because the breed was bred specifically to be faithful companions of man. For this dog the greatest pleasure is being wrapped in attention and love families. Essentially, a Shih Tzu is an affectionate, kind dog, similar to a plush toy, but with a real good soul, filled with love and the desire to be loved. Shih Tzu unpretentious. Home your pet will feel comfortable in a small city apartment, and on the vast farm. Dog sizes require special attention of the owner, especially if the animal is on the street. The fact is that often these dogs become victims attacks of larger relatives. It is worth noting that attention you need to show and when playing dogs with children. sometimes shih tzu is called “chrysanthemum.” The reason for this was face hair that grows in different directions, in the end Shih Tzu’s muzzle is really somewhat reminiscent of chrysanthemum. Another the peculiarity of the breed is bite. The fact is that the structure of the jaw (the lower jaw is slightly wider than the upper) in these dogs is such that when the teeth are closed, the jaw does not close completely, forming a kind of “overshot.” The legend of Shih Tzu dogs is more than abound. One of them says that Buddha traveled with a small dog whose description is completely similar to shih tzu. Once, robbers came to Buddha to rob and kill him. Then the little dog turned into a fierce lion and drove away robbers. After which the lion again turned into a kind and affectionate a dog. Some unscrupulous breeders are trying to sell more expensive shih tzu, citing the fact that the puppy belongs to the breed “imperial” shih tzu. There is no such breed! Shih Tzu puppies are not easy accustom to the toilet. It should be consistent and gain patience. You must not allow your puppy to walk around the house unattended until that moment until you teach him to ask for a toilet. the flattened face of an animal makes this dog sensitive to heat. Shih Tzu can get heat stroke. The thing is that the flow of hot air that enters the lungs is not enough cools down, resulting in thermal shock. In hot weather it’s better limit walking time. It is no coincidence that many families with children decide to start Shih Tzu. This is a great choice for those who have small children. Small size of the pet and its friendliness – the main components that make shih tzu great pet for kids. An important feature of this dog The breed is peculiar wheezing and snoring, as well as a tendency to tooth problems. Despite the fact that all dogs can eat feces, shih tzu are especially prone to this unpleasant behavior. Therefore, it is necessary to promptly clean the dog’s placenta, and during walks constantly monitor the animal. If you want to purchase healthy puppy, then do not make a purchase from a random breeder or at a pet store. Find a proven dog breeder, better by recommendations of acquaintances or friends who have already purchased from him dogs. 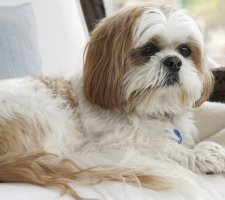 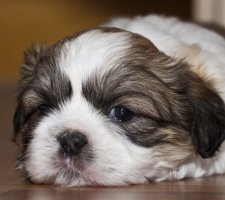 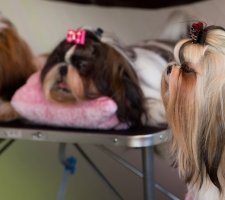 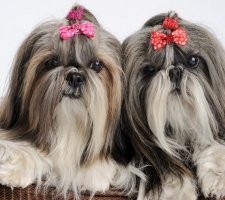 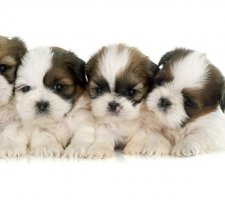 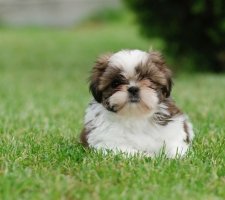 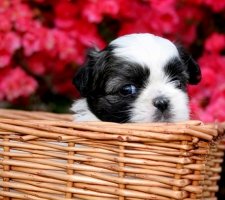 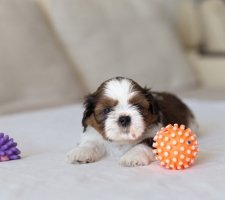 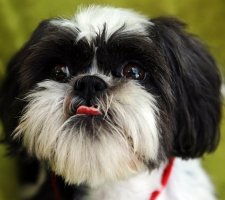 The history of the origin of Shih Tzu is very ancient, therefore permeated secrets and outstanding facts. Recent studies have shown that shih tzu is one of the oldest dogs in China and the world. Her story originates around 8000 BC! Many are sure that the breed was bred by Tibetan monks and later these dogs were presented to the Chinese emperor. There is a hypothesis that Shih Tzu were bred by crossing breeds such as Lhasa Apso and Pekingese. Regardless of where the breed was bred: in Tibet or in China, one thing is clear that the popularity of Shih Tzu began in ancient times and has survived to the present day. For example, on paintings belonging to the Tang Dynasty that date from 618-907 years BC there are images of dogs very similar to shih tzu. a number of historical documents there are many references to this the dog. For example, from the letters of Marco Polo it is known that the Mongolian Emperor Kubla Khan (13th century) contained “small lions”, but animals did not were wild, but rather full of love and tenderness. In some documents mention that during the reign of the Ming Dynasty (1368-1644 years) at the imperial court kept “lion dogs” with a muzzle resembling a chrysanthemum. Most likely, it is about Shih Tzu. In documents dated 1770-1900, not so many references to such dogs. Yet in works of art of that time, one can see images of Shih Tzu. In 1861, Shih Tzu became popular at the imperial court. In one of the imperial the decrees stated that those who would be seen in the publishing house court dogs, put to death. This decree belonged Empress Tsy Xi, who loved animals very much. The Dalai Lama handed several “lion dogs” to Empress Tsy Xi. They say that the court dogs had their own palace, and the animals themselves were accustomed to wave their paws when before them Empress. After the death in 1908 of Empress Tsy Xi, many the royal families began to compete in breeding these dogs, trying to get the best color and coat. Details of this breeding was kept secret. “Unsuccessful” copies sold on local markets, and the best puppies were given to foreign rulers. 1928 female and male were first brought to England from Beijing shih tzu.

Shih Tzu bred in order to become unsurpassed companion dog. The main desire of the pet is to be near your the owner. You may not count on the Shih Tzu being a watchman or, for example, a hunter. The main character trait is devotion. These dogs become very attached to their family. Dogs of this breeds are very funny and active, on strangers, as a rule, they react by barking, but they always find a common language with the guests.

Grooming Shih Tzu is a rather time-consuming task. For you will have to remove tangles and prevent tangling daily comb your pet. At the same time comb out necessary carefully. Those dog owners who are not going to participate in exhibitions, often decide to cut their pet. This, of course, greatly facilitates the process of caring for with hair. If you decide to cut shih tzu, then you have to do it about once every two months. Check your ears weekly for inflammations, irritations and infections. Clean ear canals and conchs need a special solution prescribed by the veterinarian. At least once per a week you need to pay attention to the teeth and clean them thoroughly. This will prevent problems with the gums and teeth. As shih tzu prone to dental problems then the amount brushing procedures can be significantly increased. Claws trimmed once a month or as needed.

Starting to train Shih Tzu is quite difficult. But as soon as these dogs understand that for each executed command they receive dainty, everything gets better right away. Learning must begin as can be earlier. Classes themselves should be short so that always maintain the interest of the animal. Most often the whole course training lasts from six to eight months. Sometimes some the owners decide to hand over the puppy professional trainer, which is also not bad.

Shih Tzu can suffer from various diseases, but there are certain ailments to which animals are especially prone. A common problem with teeth that are in the process of puppy growth may bend or even fall out. All the fault of the features skulls and jaws. A small mouth causes the teeth to simply do not fit and begin to deform due to crowding. Periodontal disease is another dental problem character. Frequent examinations by a veterinarian will help in time to resolve health problems.