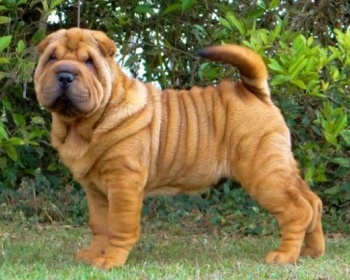 Despite the fact that some modern researchers doubt that the sharpei dog breed originated more than 2000 years ago, statues, 200 years BC. e. confirm this. Sharpei arose in the southern provinces of China, and from there spread throughout the country. In fact, the statues only confirm that in the 200th year BC. e. sharpei was already a formed breed, which means it can be assumed that this dog arose earlier.

Chinese people used this breed in completely different purposes – for the protection and grazing of animals, for the protection of homes, as nannies and in battles. Until the revolution and civil war, which led to the creation of the People’s Republic of China (PRC), these dogs faithfully served people of different social strata.

However, during the years of the so-called Great Leap Forward, when the country overwhelming hunger that led to the death of more than 40 million man, sharpei almost destroyed. More precisely, they simply ate – people survived as best they could. No matter how barbaric it did not seem.

A small number of dogs were saved due to transportation in Hong Kong, Down-Homes kennel – an enthusiast dog breeder did it Matgo Lowe. In 1973, several individuals were brought to the United States. One year later dog owners organized the “Shar Pei Club of America,” and in 1978 the first specialized exhibition of the national scale. In 1991, the American Kennel Club officially recognized breed and gave her the status of a member of a sports group.

Sharpei breed – a medium-sized dog with a large the number of skin folds not only on the face, but throughout the body (usually there are much more on the face, and the body can sometimes be completely free from folds if the dog does not overeat and has sufficient amount of physical activity). Strong physique, limbs medium length, tail is also medium length. The ears are small, bent forward, the coat is short.

A sharpei dog is, first of all, the keeper of his families. With loved ones, they are incredibly open and sociable, distinguished by great friendliness and kindness. However, with strangers they are usually closed and uncommunicative by people, moreover, if the dog not socialized enough, it can consider everyone strangers who are approaching the owner, for example during walking outside is potentially dangerous.

Accordingly, she will closely monitor the behavior stranger, and instantly defends himself if he allows the slightest manifestation of aggression. Sharpei is devoted to his family self-forgetfulness, and if you need to give your life to protect the owner, he will not hesitate to do this. These dogs are many hundreds of years old. used as guards and watchmen, and therefore militancy in their blood.

Often, this manifests as hostility towards others sharpei dogs can be aggressive and engage in battle without warning. This breed perfectly perceives children, loves spending time with them, playing, walking. Sharpei excellent copes with the role of a nanny, and his very developed intelligence helps realize your own responsibility for your little the owner.

These pets have inner pride and independence, despite on your obedience and devotion to the master. Therefore from you it takes the ability to put oneself as a leader in order to earn respect for the dog. Sharpei gets along well in a city apartment, he not inclined to be destructive and make houses a mess from overabundance of energy. Although, the energy level of these dogs is enough tall, they need walks and exercise for maintaining muscle tone.

If you need a guard dog for a private home, sharpei perfect for this. However, keep in mind that the breed has short hair, and therefore can not live on the street all year round. Sharpei understands the owner very well, and often even intuitive level. He likes to spend time with his loved ones. more people than dogs, so come to terms with the fact that You’ll have to take your pet with you when traveling to the sea, eg.

Despite the fact that sharpei is a very loyal dog, sometimes they may be a little stubborn, in addition, you are required leadership quality. Sometimes you should clearly show who, so to speak, in the owner of the house. For this, if the dog does not obey you, you can pick up she has a favorite toy and don’t give back until she has learned what is from her want to. But this must be done with kindness and humor, at the same time realizing their superiority.

Sharpei are very smart and well assimilate various teams. As the dog has innate watchdog and fighting qualities, it can be teach not only the basic commands that are needed, but also more difficult, depending on what role you see your favorite. In addition, you will need to focus on socialization as well as on cancellation teams to be able to stop the animal, for example, from a fight with another dog.

The sharpei dog has a short coat, which is practically does not need to be combed out – once a week it will be quite enough. However, you will need to wipe the creases regularly during the day, eliminating harmful bacteria that can cause skin irritation. Also note that sagging skin around eye, dust and dirt can accumulate during walks, and therefore always keep your eyes and ears clean.

Claws are usually cut 3 times a month, bathe a dog 1 time per a week. More frequent bathing is not recommended due to the fact that they may to dry the skin of folds, so if you want to bathe sharpei more often – choose the right shampoo with the appropriate pH. Sharpei sensitive to sun and overheating.

Sharpei, like all dogs, are prone to certain diseases, in including:

Interesting facts 1. Shar Pei, like Chow Chow, has a blue and black tongue. Only these two dog breeds possess such feature. 2. In 1978, the Guinness Book of Records declared sharpei the rarest breed in the world. 3. Victoria and David Beckham own sharpei nicknamed Barnaby. 4. Shar Pei – one of the most expensive breeds dogs in the world. 5. Some people believe that sharpei is not at all an ancient breed of dog, and was developed in Hong Kong in the sixties years by crossing boxers with bulldogs and bloodhounds, and also with chinese fighting dogs.

Did you know? Sharpei breed has been bred specially with folds on the skin to get an advantage in dog fights. 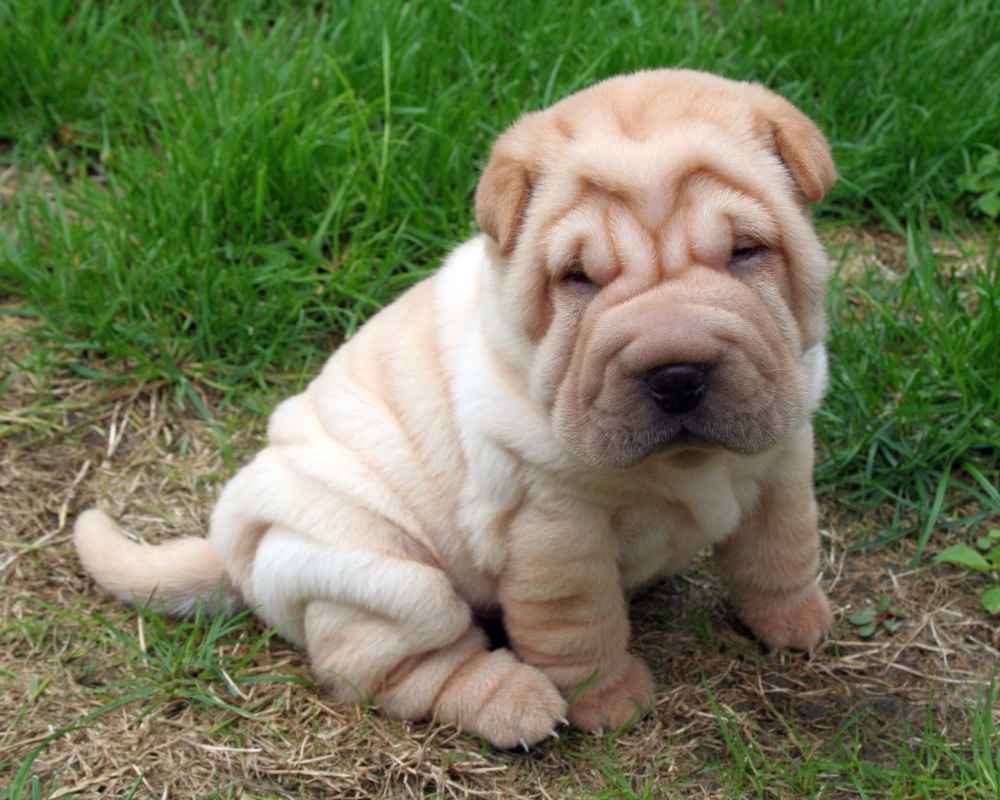 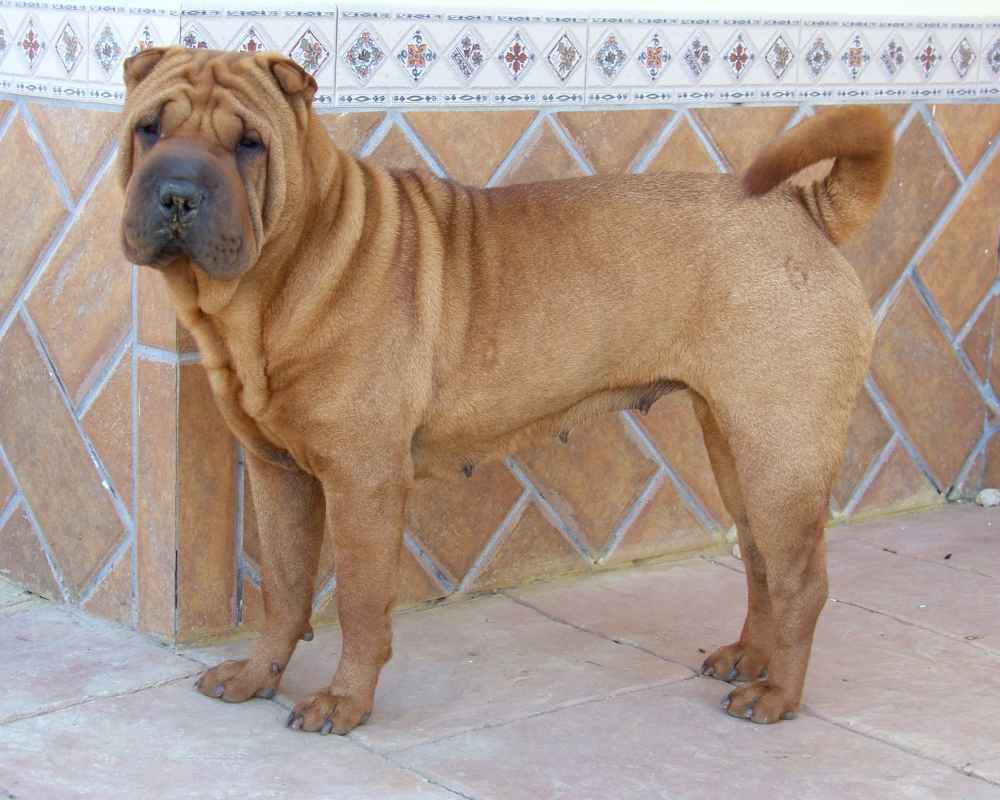