Russian toy terriers (which are often called Russian toy noted in the new edition of the Breed Standard) are decorative-room dogs, whose main function is to please the owner’s eye due to its small size. Growth of these doggie does not exceed 30 cm with a weight of not more than 3 kg. Most a common shade of toy terrier hair – black with tan marks, but also found brown, red, blue and lilac colors (with tan and without them). Breed Russian Toy Terrier It is divided into two types – smooth-haired and long-haired. Smooth-haired Russian toy terriers have short hair without undercoat, in comparison with their “fluffy” brothers their figure seems more fit. Long-haired toy terriers are different the presence of long hair on the ears, tail (if it was not cropped) and paws. The breed is lean and graceful, these dogs are tall on legs, have straight parallel legs. The muzzle of Russian toy terriers is small, wedge-shaped, it is decorated erect ears of the shape of a regular triangle quite large size (compared to head size). An interesting fact is that bitches of this breed are affectionate and loyal to the owner, but offenses are remembered for a long time, they are more jealous of the owner than males. Like true women, Russian toy girls never lose their self-esteem and show their temper, if they don’t like something. There are disputes about which of the Russian toy – girls or boys are man’s best friends. AND, Of course, opinions are divided. According to external signs, both sexes of these Small dogs are very similar to each other. 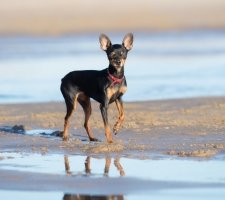 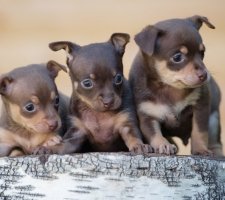 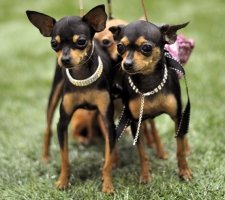 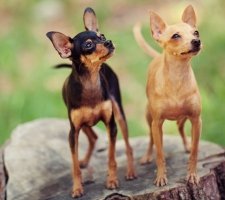 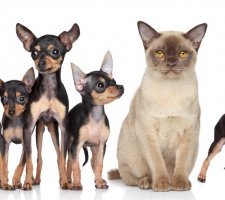 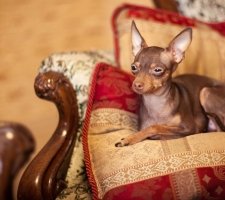 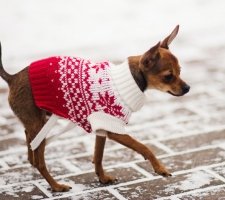 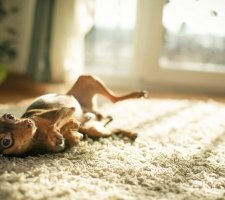 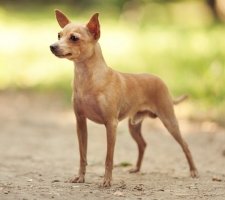 The ancestors of Russian toy are miniature English toy terriers, which from the end of the 19th century began to appear in the Russian Empire. Their small size, unpretentious care and docile character made English toy terriers darlings of the nobility. But in the state of affairs the October Revolution of 1917 intervened, which practically led dog population to extinction. This state of affairs was due to the fact that large service dogs were required, and decorative as if there was no place in a new country. The idea of creation The breed originated in the minds of metropolitan breeders in the early 50s. Due to a significant decrease in the number of English toy terriers Often mating occurred between individuals with defects (colors, buildings, etc.). This led to the fact that the direct descendants of the British – Russian toy terriers are so dramatically different from foreign brothers. By the way, smooth-haired toy terriers initially appeared. In the 80s, Russian Tois began to lose their popularity due to imported “fashionable” decorative dogs of other breeds. But in the next for decades, the situation has stabilized, and toy terriers have taken their toll. a niche in the ranks of dog lovers. The fact that in the Breed Standard is interesting English toy terrier registered only one acceptable shade of coat – black and tan, while their Russian relatives often have other colors. To date, English toy terriers are considered a relatively rare breed, while bred in their time in Moscow Russian Toy are popular and often found like ours at home and abroad.

Despite the subtlety of their complexion, Russian Tois can improper parenting grow quite angry aggressively tuned not only to strangers, but also to members of their own family. Uneducated Russian toy terriers easily spoil their property owners (nibble shoes, make puddles, anywhere), but it’s very do not like punishments. Often an angry owner teaches his dog, for which he then also feels guilty (especially if it’s it’s about the offended female Russian toya). Their main difference is noisy and often indefatigable barking about and without him. Correctly a trained dog of this breed is affectionate, loyal to the owner. They are always emotional, agile, playful and not indifferent to all living things.

Unpretentious Russian toy terriers can be wonderful companions for adults and busy people due to their compact size and simplicity in leaving. In families where small children live, Russians toy terriers can grow overly excitable, as well as be injured child not out of a sense of evil, but curiosity For the sake of living these obstinate babies is only possible in a good way lighted room, without drafts. Toy terriers, as well as large dogs, love walking, but in case of bad weather or for now the animal is not yet used to the house, constant exits beyond the walls of the house, you can equip a specially designated place (dog tray, in which can be laid absorbent diaper or artificial weed). The first time an animal just appeared in a house, carpets should be removed by spreading diapers, which should gradually (when the dog understands why the owner laid them down) move to a place that will be a toilet for a dog. Hair care smooth-haired terrier is minimal – swimming as it gets dirty, timely prophylaxis of bloodsucking. Long-haired toy terriers require more careful care – combing out dead hair special brushes. It is advisable to purchase toys for home friend. Good and interesting dog squeaker toys – rubber bones, balls (smooth, without spikes, medium size, to the dog during the game could not swallow the product or bitten off piece of it). It is undesirable to give as toys products that are designed for cats. Even miniature size toy terriers still do not make his teeth weak. A small size stomach may lead to the need for surgery. Stuffed plush toys are fraught with malocclusion. If you really want an animal please a soft friend, you should choose a fabric (or with a small pile) a toy, after making sure that the nose, eyes and other parts sewn or glued firmly. feeds can be selected as ready-made dry and canned feed, and cook the dog yourself. In the case when the owner of the dog decides to buy industrial products for the pet, preference should be given to species designed for dogs of miniature breeds. 2/3 natural food for toy terrier should consist of meat (including offal). In the diet must be present dairy products, eggs. Porridge (mixed with meat) should alternate with boiled vegetables (also with meat). At Feeding your own cooked food is worth considering vitaminization of the animal in the autumn and spring. Adults dogs should receive food at least 2 times a day, and puppies up to 3-4 months at least 4-5 times. The cleanliness of the bowls is very important, dirty, they can disrupt the digestive tract of the dog. It is advisable to change the water daily, and wash the bowl after feeding. By the way, between the owners of toy terriers disputes are often held about the age at which the animal may be purchased from the breeder. The benefits of small toy terriers consist in the fact that these dogs can be raised to your liking, and a more adult person can show character. Worth relying on not only at the call of your heart, but also soberly assess the general condition dogs, as well as the conditions of his stay with his mother. Disturbing moments that may require a long treatment: weak joints, copious discharge from the nose and eyes, apathetic behavior, inflammatory processes in the ears or eyes. In a word, all symptoms of ill health should be considered. Also worth pay attention to the dog’s character – overly aggressive (like and very shy) the puppy may not take root in the family. Insignificant defects may be acceptable in cases where the puppy not acquired for participation in exhibitions and divorce.

Depending on the residence of the dog owner and financial funds, you can consider the option of contacting a dog training club, where, under the supervision of an experienced specialist, the owner of the animal will teach pet good manners and obedience. The simplest teams (“It is impossible!”, “Fu!”, “Come to me!”) Can be learned between the owner and dog before 6 months of age, whereas after this Deadline training will be needed. A dog who even performed a simple team is right and good, should be encouraged (praise, perhaps treat). Do not shout and beat the animal – toy terriers will not love such an owner. In some cases, when the dog does not obey, it is reasonable to raise the voice a little (not breaking into a cry) or for a while to ignore fawning delinquent animal.

The main weak points of these dogs are teeth and musculoskeletal system. Dog bones need recharge vitamins. Dogs are also often injured by the owners themselves, not calculated their own strength and fragility of the animal. Teeth dogs should also be given due attention, monitor availability tartar, which damages the condition of the teeth and gum health. Inflamed gums are open gates for infections. Even for those dogs that are most of the time carried out in an apartment, it is advisable not to forget to vaccinate against rabies, enteritis and plague. Often owners are invited comprehensive vaccination not only against these three serious diseases, but also against rhinotracheitis, adenovirus, leptospirosis. Better choice to do in favor of imported vaccines, because they usually have fewer side effects. Prior to vaccination deworming and prophylaxis of skin parasites, track to on the eve of vaccination, the animal was completely healthy.