Often animal owners have to travel to different distances with your pets. And usually these Traveling is difficult due to hostility rules for transporting animals on different modes of transport, documents, their regulatory and physiological characteristics of their pets.

Transportation of pets by bus, minibus

When transporting pets in public transport a mandatory requirement until recently was the presence of:

On January 9, 2017, the Order of the Ministry of Agriculture entered into force. economy of the Russian Federation dated December 27, 2016 No. 589. In clause 16 it is indicated that transportation of decorative, service and domestic animals in territorial limits of the Russian Federation are allowed without accompanying vet documents, if it is not caused by their transportation to the new owner, participation in competitions, and is determined by personal goals. 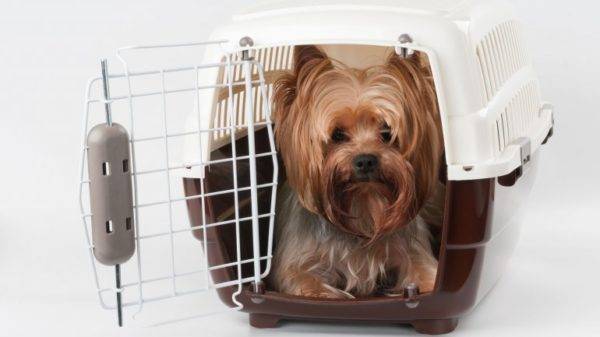 Small animals are transported in special vehicles containers, bags, transport baskets whose bottom is not moisture permeable, and grid walls allow air to flow freely circulate. They must not only provide comfortable conditions. during long transportation, but also prevent pollution vehicle.

Carrying dimensions should not exceed established transport companies of the size of hand luggage (55x35x25 cm). IN in case of compliance with the dimensions, transportation of the pet is not paid. But the box must be placed in a designated place or kept on hands.

Putting a basket under your feet is not recommended, so as not to expose Pet mental injury due to engine noise, shaking, flickering legs. Having placed the box with the pet in the aisle, its owner creates obstacles to moving around the passenger compartment.

Medium and large breed dogs are as isolated from humans as possible. through various accessories and are under constant control guardian. As a preventive measure, hocus pads are involved a muzzle, and to limit free movement around the cabin – short leash. Dimensional dogs are placed in the tail of the cabin or in the back seats of the bus. They pay for transportation, buying a baggage ticket.

City public transport exception make for guide dogs. If the dog accompanies in transport the owner, then payment from him is not charged. The dog is located next to the person accompanied by him and must have a protective structure – muzzle and special collar with belt loops. 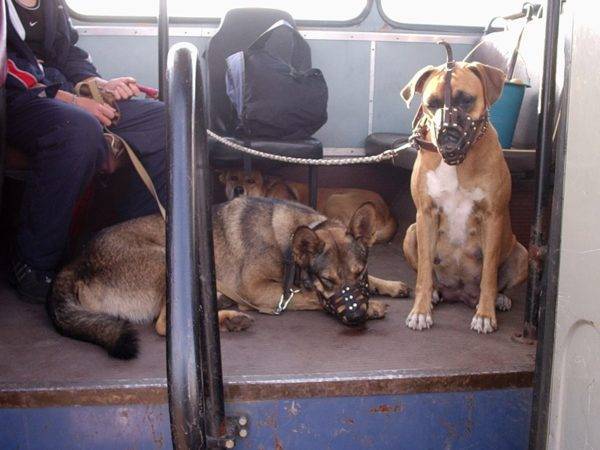 But, even observing all the above rules, the owner can refuse to transport an animal, referring to the “Rules of carriage passengers and baggage by road and urban land electric transport. “They stipulate that in public Do not transport objects that may contaminate Salon and others.

In rainy slushy weather, dog hair, especially long-haired, gets wet, gets dirty and, brushing off, animal threatens the purity of others. To avoid this, before boarding wipe the dog dry, have a diaper or oilcloth with you, to protect the seat from dirty paws.

Rules for transporting animals in the subway

The rules for using underground electric vehicles prohibit transportation of animals without means of temporary isolation. Staff metro argue this ban with safety concerns four-legged pets and metro passengers. When using escalator can injure a dog, create a hazardous situation for people or cause an accident.

The “Rules …” stipulates the size of the accessory for transportation animals. So, for example, in the subways of St. Petersburg and the capital Ural these dimensions should not exceed the standards of hand luggage (55x35x25 cm). In Moscow, the boxing size is 150 cm. But the metro for the accessory charges more than 120 cm fee. 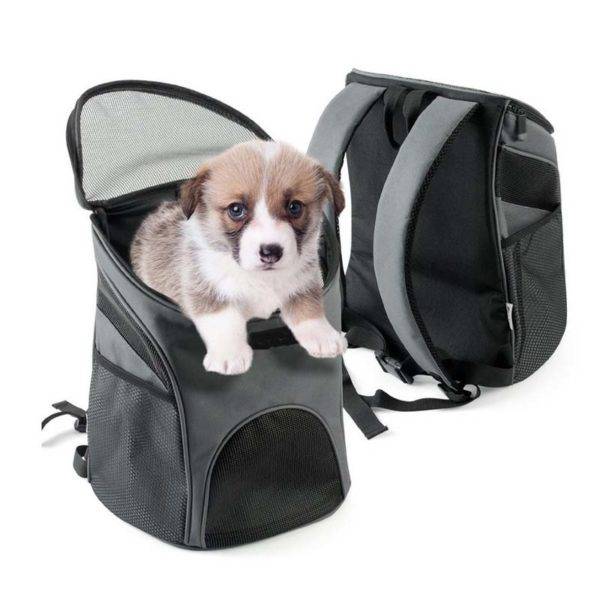 But there are no rules without exceptions. Sometimes metro workers can skip the average dog, provided that the owner will keep her while the escalator is moving in her arms, and passengers will not be at risk of bites. Corpulent dogs in the “subway” are not allowed, and their owners are advised to use another type transport.

The shaggy passengers of the “subway” feel most at ease in the capital of Tatarstan. There are no pet size restrictions. The owner can purchase a ticket for the animal and follow to the station appointments subject to:

In all subways of the Russian Federation, an exception is made for guide dogs. They follow for free with their owner. But the animal must be in a muzzle and special equipment. 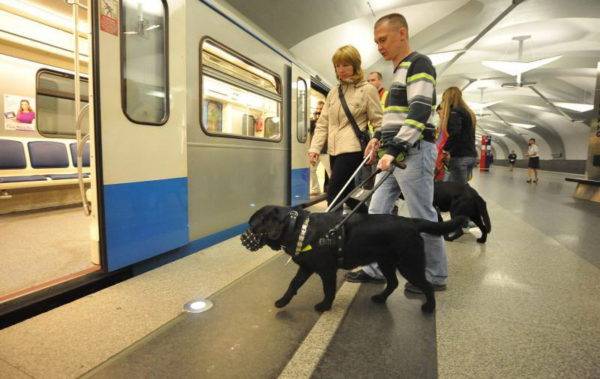 Carriage of animals on the train

According to regulatory documents of railway transport, pets are allowed in passenger trains only in cars that have appropriate structural capabilities – separation of seats and the possibility of isolation pet.

This category includes compartment and reserved seats. IN Luxury or CB cars with animals prohibited. If the owner needs to be transported by rail large dog, then he will have to pay the full cost coupe.

One passenger can carry a limited number of dogs. The pet must be securely isolated, partially immobilized in moving around the car and have vet documents:

Small animals are transported in boxes, and they require purchase an electronic baggage check. If their mass is ≤ 20 kg, it is paid as baggage of the appropriate weight. At exceeding this rate, payment is made for the real mass pet.

In suburban trains and regional railway transport transportation of dogs of large breeds is allowed in the vestibule, which located immediately behind the rolling stock or in the “tail” of the train. On the site should be no more than 2 dogs in the muzzles and with leash. Animals are followed by a guardian.

An exception is made for guide dogs. The owner can ride with a dog in any type of carriage for free, provided that the animal will be in a muzzle, a collar and will not leave the place next to accompanied by a passenger.

When transporting pets to foreign countries should familiarize yourself with existing rules. So, for example, when following to the country or crossing it in transit are observed following rules:

Almost every European state has its own requirements, and in America and Britain own laws are registered in each state or county.

When transporting animals to far abroad countries from the owner an international passport must be established for each animal. There are requirements for animal identification methods. Implanted microchips must be read by the scanner and enter database of identified animals. All the subtleties transportation laws can be found at the consulate.

Travel abroad in a private car

If a four-legged pet is about to cross the border state on the owner’s personal car, you should take care of availability:

Motor vehicle must be equipped devices that restrict the movement of the pet in the cabin and a grid that excludes interference with the driver. Modern fixtures represented not only by containers for transportation.

Representatives of large and medium breeds, they provide comfort and safety for long journeys:

The owner must first familiarize themselves with the requirements, presented in various countries for the transport of pets and collect all documents in a timely manner, vaccinate and chipping.

Air transportation outside the state

The regulations for the transportation of pets by air are established by each airline separately, but there are general rules. So, for example, small animals can be transported in the cabin in special container if its dimensions correspond to 55 x 40 x 20 cm and total weight ≤ 8 kg. 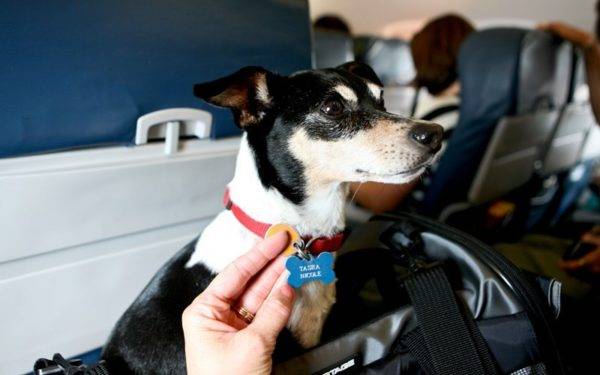 Payment is made as for baggage, but from the total limited the amount of baggage, its weight is not deductible. The cabin does not allowed to transport more than two units of animals. Boxing is hosted under the front seat of the chair or on the hands of the guardian. Not allowed carry boxing in an empty seat.

Service animals (dogs or cats accompanying people with handicapped, rescuers, helper dogs) are not limited by size and weight and, when prior agreement with the airline, transported is free.

In order to obtain an appropriate permit document confirming the need for such support passenger and the presence of the animal the appropriate skills. On 1 Only one animal is allowed per passenger.

Before you fly abroad with your pet, you need to clarify requirements and list of required documents. In some countries translation of veterinary documentation into the language of the host live load is required countries. Permits may be required from sanitary and epidemiological services of a foreign state.

Rules for preparing the animal for the trip

For any pet, a change of place is stress that can have serious consequences. Therefore, if often assumed to transport a pet, it is worth preparing him for this in advance. Train dogs for transport, for example, dog handlers advise four months of age, gradually extending the route. Pet must get used to the noise, crowding, stampede and learn how to calmly to respond to them.

Before a long trip, you need to take care of food animal. The best choice is a dry food that does not deteriorate, It has a small volume and does not stain the interior or compartment. It can be taken in even if the animal is used to natural food.

It is necessary to establish in advance how the pet suffers motion sickness and, in If necessary, consult a veterinarian, as well as to purchase funds from kinetosis, sanitary napkins and hygroscopic diapers. 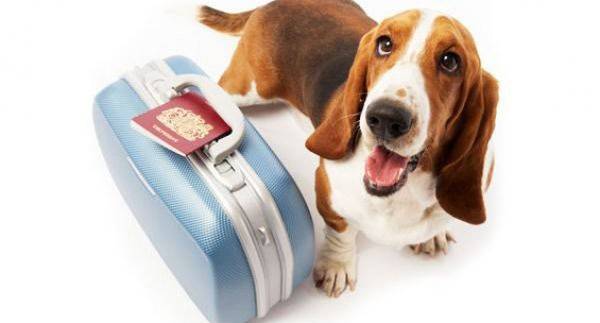 Only a completely healthy animal can be transported. Transportation of a sick pet is allowed only at medical indications and if there is a supporting document.

Before traveling, you need to walk the dog well and stop feeding 4-5 hours before the trip. All fixtures used for transportation should be comfortable, safe, consistent requirements.

You need to consult a veterinarian, perhaps you should take with sedatives to calm the pet, relieve stress. When transported in the cargo compartment of a vehicle, the box must be provided with a tag containing not only information about the animal, but also indicating the time of administration of sedatives.

You should especially read the restrictions. due to the anatomy or physiology of animals. Representatives some rocks do not tolerate pressure drops, climate change or fast movement. All these subtleties must be clarified in advance, and also weigh the risks that the animal can wait for a long flight, a trip in the car or coupe the train. 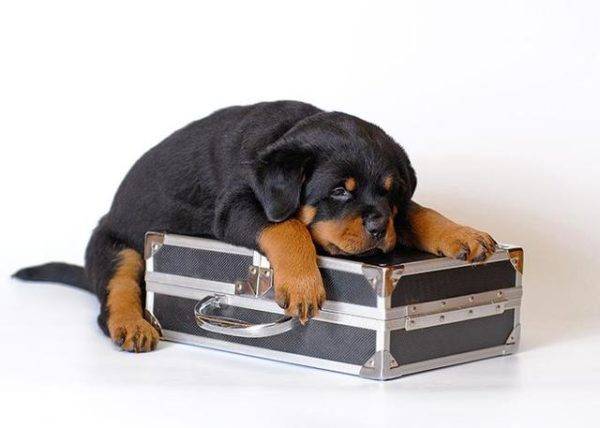 And moving in your own car is “transportation”. Per safety of live cargo, many transport companies do not bear liability if the insurance contract is not drawn up. During transportation animals are not provided for feeding, care, if these conditions are not agreed in advance.

If there is no need to carry a pet, then it is better to leave him under supervision of specialists in a hotel for animals or at responsible relative.