Pyroplasmosis – a disease caused by pyroplasm (babesias) – the smallest blood parasites Piroplasma canis (Babesia canis), actively breeding in dog erythrocytes. The intermediate hosts of these parasites are bloodsuckers – ixodid ticks. Glaring at the dog’s body, ticks with saliva are let into blood of an unfortunate animal pyroplasm. Gradually destroying red blood cells, pyroplasma thereby violate the function of providing the body with oxygen, which leads to intoxication of the body, a violation functions of the kidneys, liver, nervous system, brain, heart. The incubation period when parasites entered the blood cells animal, but for the time being the symptoms are not visible, ranges from 2 up to 20 days. Such a large gap is due to the number of pyroplasmas in the body of the dog, the state of the immune system and the age of the animal. As a rule, the lack of medical care leads to death the outcome. Timely treatment provides a chance for recovery.

Causes of the disease

A dangerous period when a dog can catch an ixodid tick – warm season from May to September. Moreover, ticks can wait for a dog not only in the park, grove, forest. Even in the courtyards private sector and summer cottages often in thickets of grass and shrubs present bloodsuckers. In appearance, ixodic ticks are oval-shaped parasites covered with a solid chitinous layer. Their size increases significantly during the exhaustion of blood – can reach 1 cm. However, not all ixodic parasites are carriers of the disease.

Symptoms of piroplasmosis in dogs

The insidiousness of the disease is that pronounced symptoms appear when a large number of red blood cells is destroyed parasites. In the early days of illness, a dog can only observe decreased appetite, apathy, and a slight temperature (usually begins the change in body temperature after separation of the pumped клеща от собаки). 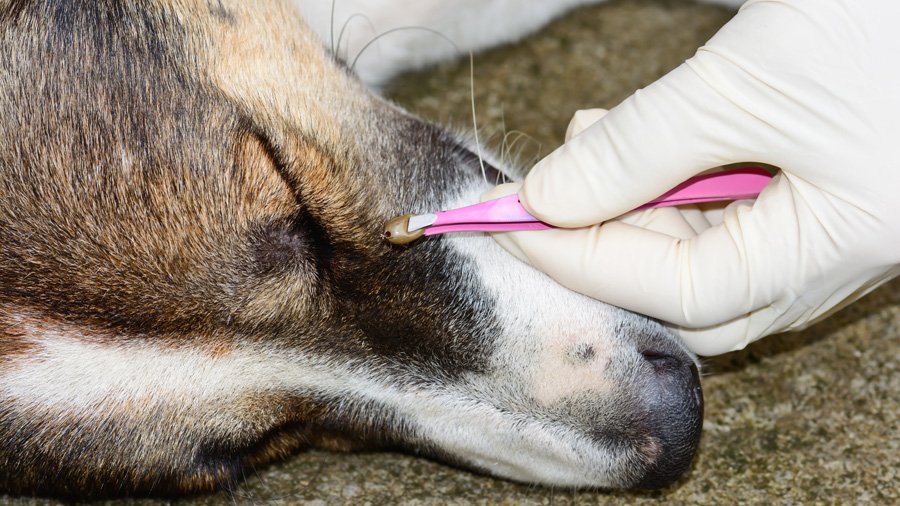 У собак пироплазмоз может приниматьacute or chronic course. The acute course of the disease is usually in the absence of first aid in the first few days leads to the death of the animal. In acute pyroplasmosis observed such symptoms:

These symptoms are observed in the dog for 2-4 days. Subsequently there are other severe signs of damage to the body that may be present in the animal for a week:

A relatively mild form of pyroplasmosis is chronic, in which Pet has a better chance of salvation (compared to acute). Chronic pyroplasmosis is most often observed in dogs with severe immunity or have had a previous illness. Such a course of the disease can accompany a sick dog for 1-2 months, then how a full recovery may take up to six months. Symptoms in the chronic course of the disease:

After collecting an anamnesis, the doctor prescribes a blood smear for laboratory research, which is supposed to consider the presence of pyroplasma in the red blood cell (it is desirable that the sampling process blood passed in several stages – not all cells are affected parasite, so the absence of pyroplasm in the smear does not yet speak about absence of disease). In addition to blood, a veterinarian examines the analysis urine. Treatment of pyroplasmosis at home (using folk medicine) – a waste of valuable time, the path to death of the caudate favorite. Only in a veterinary clinic can they correctly determine diagnosis (pyroplasmosis is similar in symptoms to plague and leptospirosis) and prescribe a treatment that will consist of:

During treatment, the dog’s diet should be adjusted. In his composition should contain liquid cereals mixed with boiled lean meat, mashed meat (also low-fat), cottage cheese and kefir (in small amounts). If the dog’s menu consists of ready-made dry feed, then it must be pre-fed to the animal soak in warm boiled water. In this case, force-feed the dog not necessary – it will only lead to an additional load on the body. Strongly contraindicated: raw (especially fatty) meat; fresh (also oily) fish; fermentation vegetables (cabbage, beets); flour products.

After a walk, the owner should carefully inspect the coat and dog skin for bloodsuckers. Favorite places of parasites – the ears, neck, crotch and area near the dog’s anus. In addition to ixodidae, there are many other varieties of ticks, carrying severe diseases (for example, a subcutaneous tick is dangerous demodicosis). Seeing a parasite on the dog’s body, you don’t need to panic, and also water it with vegetable oil or alcohol. Is required eliminate the tick with tweezers, grabbing it at the site of the bite. Turning the tweezers around the axis, you should carefully get the bloodsucker. To prevent this often fatal disease, the owner precautions should not be neglected – drops, collars, sprays. Properly selected tool will allow for time for the dog not to catch not only the tick, but also other ectoparasites, carriers of diseases.