Newfoundland is a giant, but gentle, bold and smart dog, which is distinguished by its obedience and boundless love for to children. She will be a great pet for any family. Probably the most famous Newfoundland is the hero of a children’s work “Peter Pan”. Although the character is fictional, he is excellent illustrates this breed’s love for children. Newfoundland loves water, his membranes between the fingers also remind of this. Exactly this influenced by the fact that dogs of this breed often perform duties lifeguards on the water. Today, Newfoundland is, first of all, the dog is a companion. She has many positive qualities, but the gigantic dimensions of the animal indicate that the pet may to face various diseases. This must be considered deciding whether to purchase such a dog. Newfoundland – calm, sweet and friendly animal, especially regarding children. At the same time, the dog is ready to stand up for itself and for its own the owner. Despite the fact that this breed cannot be classified as active, nevertheless, Newfoundland loves swimming and playing in the water. This is precisely the reason why dogs of this breed are regular participants in dog sports on water. Newfoundlands will be excellent companions travels and hikes, because of this many tourists and travelers become the happy owners of these lovely giants. The weight of an adult dog can reach 50 – 75 kilograms! This suggests that the dog may develop pathologies musculoskeletal system, which leads to a reduction in life animal. True, this happens mainly in negligent dog breeders. Like any dog, Newfoundland needs an early socialization. Otherwise, the animal may be closed and be aggressive towards strangers and guests. For those who do not confident in their educational abilities, experts recommend give the dog to a special class for dogs, where with your pet Specialists will be engaged. Like other puppies, Newfoundlands love to play, but in view of their size they can be harmful the owner’s property, for example, decor and interior items. It is still one evidence that puppies of this breed need early training and socialization, and of course, in large numbers Begin training from the first day a puppy appears in the House. At this age, the dog is fully controllable and maximally prone to learning. In the process of training, do not forget Use the fundamental principles of praise and reward! If you plan to teach your pet water exercises, then it is necessary to produce such training under strict control, it is better of course, turn to a professional to the trainer. Newfoundland is the dog that obliges you to have reliable fencing in the yard. True, this does not mean that the pet can be kept directly in the yard or in the aviary. Your your pet must live with you under one roof! Another an important point every newfoundland owner should know lies in exercise in the first two years of life. IN This period the dog’s skeleton goes through the active phase of formation, and it means you need to reduce heavy physical exertion can adversely affect the development of the ridge and musculoskeletal system as a whole. During this period will be enough water activities, walks in the fresh air. Wherein limit the load while jogging. Such restrictions Mandatory until the pet reaches the age of two. 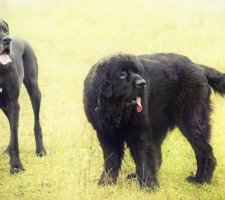 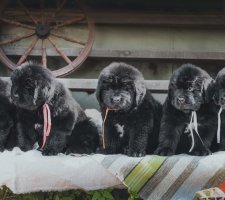 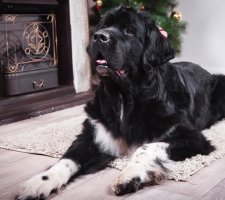 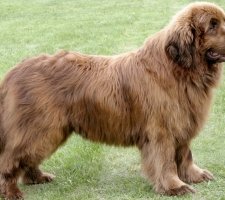 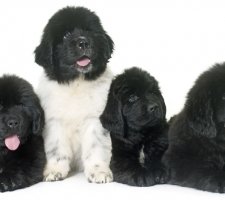 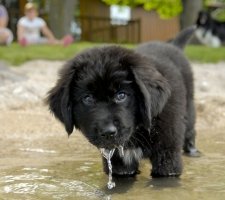 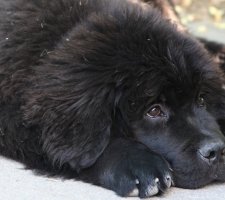 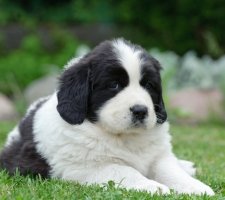 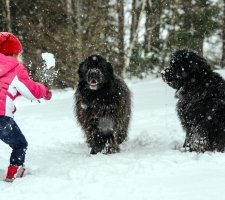 The history of the origin of the breed, for the most part, is assumption, since few reliable facts about the emergence and development of Newfoundland. According to one version, Newfoundland appeared in the Pyrenees, from where later fishermen brought this breed in Newfoundland. According to other versions, the origins of the breed are taken start in France or in the countries of Scandinavia. The only thing it’s known for sure that active breed selection started on Canadian island of the same name – Newfoundland. On the island the dog was a faithful helper to fishermen, which influenced development of a love of water in dogs. Permanent presence near the water explains the presence of a dense, almost waterproof wool, membranes between the fingers. Newfoundlands helped move heavy fishing loads, rescued drowning during shipwrecks, dragging children out of the water. Later, the breed fell into England, where she became very popular. Mention this breed found even in the works of Lord Byron. Newfoundland rightfully earned the title of rescuer of drowning. According to the story told by one of the Titanic’s saved passengers, Newfoundland, who was on the ship with his master jumped into the water and sailed at the owner’s boat until the ship came to the rescue Carpathia One way or another, dogs of this breed – in truth amazing.

Newfoundland is known for its intelligence, loyalty and affection. Despite the fact that this breed belongs to the guard breeds, Newfoundland is a great family dog. Pet having fun will spend time with the owner. Among other things, Newfoundland is a real helper for parents. Dog can keep track of children at reservoir or simple pool. This, of course, does not mean that children can be left unattended and only rely on animal. Sometimes, with insufficient education, Newfoundlands can show bad habits: digging, barking, etc. It happens also in those cases when the animal is bored. note that this behavior can be considered the norm in adolescence (from six months to a year), but do not let it be done to the animal.

Newfoundland holds waterproof undercoat brown, black or gray. Therefore, it is necessary a couple of times comb out the wool thoroughly with a wire brush a week. it will help prevent the formation of pellets and allow timely remove dead hair. Regular combing will also prevent pet hair distribution around the house. Newfoundlands actively shed twice a year – in spring and autumn. During this period, you need more often comb out the hair. Dogs of this breed are prone to copious saliva. Newfoundland owner will have to carry a napkin in order to wipe the dog’s mouth in a timely manner. Bathe these dogs by as needed. The remaining care is procedures which are common to most breeds. Claws cut like usually every two weeks. You need to brush your teeth every week special toothpaste. Also need to make sure that the ears Newfoundland was dry, because these dogs are very fond of water.

Newfoundland training, like most other dogs, should pass on the principle of “from simple to complex.” Sometimes inexperienced dog breeders have difficulty learning. Main problem more often all lies in the reluctance of the animal to learn. That’s why it’s important start dog training at an early age. In this period Pets perceive the learning process best, especially if it is backed by rewards in the form of goodies and praise. Newfoundlands always want to please the owner, but aggression or excessive persistence can negatively affect the whole process learning.