Neapolitan Mastiffs are Great Watchmen territories entrusted to them and the lives of people. Sometimes their calm and the melancholy look (if there is no danger) is incorrectly regarded – they may seem great deadpan good-natured but worth encroach on their beloved master, how a mastiff will turn into an angry and merciless beast. History of this ancient breed very interesting and ancient – these dogs showed their power during gladiatorial fights, not afraid of either bears or lions, which significantly surpassed them in size and weight.

Neapolitan mastiffs (otherwise – Neapolitan mastino) – these are large dogs whose height at the withers can reach over 75 cm, especially in males. The weight of a Neapolitan mastino reaches 70 kg (sometimes more) in males and 60 kg in females. This breed is abundant loose-hanging skin throughout the body, a large number of folds on the face, volumetric suspension on the neck and stomach – all this does The massive look of a mastino is somewhat intimidating. Animal back muscular (body length 10% higher than the height at the withers), long, head – large, short, neck – short, strong. Forearm and shoulders with well developed muscles, limbs dogs are powerful, proportional to its entire composition. Tail Neapolitan mastiff has a saber shape (most often the tail do not stop). The coat of dogs of this breed is short (1-1.5 cm), without Dogs, as a rule, are more severe in males than in bitches. Shades mastiffs – dark gray, black, blue, fawn, brindle, sometimes there are white marks on the chest, legs.

Photo of a Neapolitan mastiff: 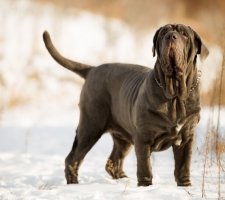 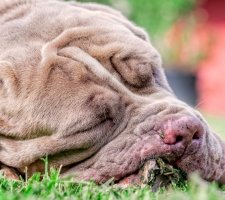 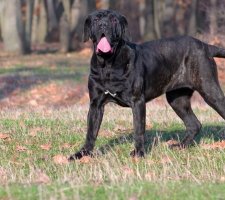 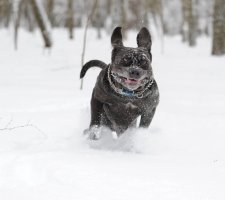 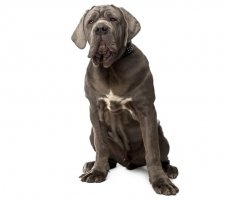 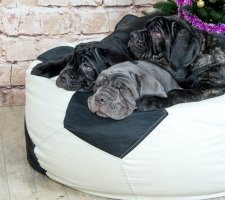 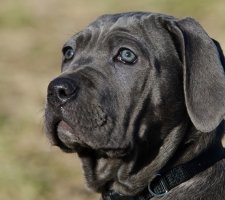 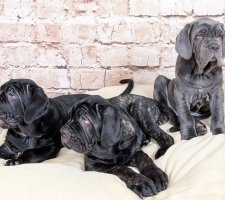 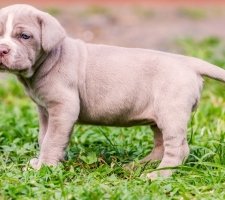 It is not known for certain which ancestral blood gave rise to such breed like a mastino neapolitan. Which is not surprising, since mention of dogs outwardly similar to Neapolitan mastiffs appeared during the time of the Roman Empire (according to some sources even earlier). Allegedly direct relatives of mastino Neapolitans are Tibetan mastiffs who in the time before Eras were sung by philosophers and travelers. Looking at tibetan mastiffs, you notice their true similarity with the Neapolitan (for except for thick long hair in Tibetan mastiffs). Despite ancient origin, neapolitan mastiffs were recognized officially relatively recently – in 1949. Founder and the main creator of the breed is considered to be the Italian Pietro Scanciani, who devoted many years of hard work to breeding famous mastiffs. Only in the 1970s Neapolitan mastiffs began to be massively distributed in Europe, and before that their main residence was Italy. It is noteworthy that the appearance Neapolitan mastiffs over time acquired significant changes, but these animals remained for many centuries big, strong and fearless fighters.

The character of the Neapolitan mastiff

Neapolitan mastiffs – intelligent, phlegmatic dogs, balanced, often not showing off their feelings. Not however, many experienced owners note their unprecedented devotion and attachment to the owner, for the sake of saving his life and health friend-man they are ready to fight with anyone. This breed is not is “bitter”, even in a dangerous situation, mastino neapolitan prefers to act than give voice. Often experienced the owners admit that before the guest is allowed to enter, “a Neapolitan mastino will carefully examine the person and thoroughly sniffs at him, and only then, if the newcomer dog will like, then he can enter the holy of holies – the master’s house. It is noteworthy that with all its location to to the owner, these dogs are a little selfish and jealous, that’s why acquire a Neapolitan mastino for a family with young children or a large number of pets is undesirable. Mastiff gives all himself to his owner and his safety, therefore wishes same dedication in return. Mastiffs rarely harm their members families, but their considerable size, improper upbringing, some character traits (such as jealousy) can be detrimental health. In addition, these dogs never forgive a person. betrayal, so before the acquisition of such a hero is think well, because they choose the owner and the leader once and forever and ever.

The large dimensions of the Neapolitan mastino suggest content in country or private houses, but often these dogs live in apartments. In any case, the dog should have its own place, quite free. It is desirable that the litter is medium stiffness – too soft will allow the bones to deform, and tough and hard will leave ugly short hair without it receding hairline. It is necessary to equip the dog’s place with bowls for water and food, toys (while their size should correspond to a large mouth mastiff to avoid swallowing). If the dog resides in apartment, then walking is necessary, at least 2 times a day. At the same time, mastiffs, as a rule, are not lovers of excessive physical activity, so calm walks in the fresh air and dog will benefit, and the owner is not exhausted. By the way Mastiffs do not like excessive summer heat, and sleep in the fresh air they adore. By and large, Neapolitan mastiffs do not bring their owners have a lot of trouble due to the presence of short coat. For improving blood circulation, cleansing and remove dead hair is recommended to comb out mastino Neapolitano at least 1-2 times a week (often during molting). Since dogs of this breed have a large number of folds skin, improper care and lack of hygiene can lead to irritation and infection. Dog eye area should be clean, without pathological discharge (and without that drooping eyelids can become seriously inflamed). But it should not be often wash the dog, it is recommended to regularly look at the folds (after food, walks), wipe them, cleaning from dirt, saliva, food debris. After a walk, it is advisable to wash the dog’s paws, and a full bath with water and shampoo to produce no more than 3-4 times a year (or cases when the animal is excessively dirty). physiological features of these dogs are enhanced salivation, panting and snorting, which can sometimes be a difficult factor for these giants to live in urban small apartment. Sometimes owners of Neapolitan mastiffs make the mistake of believing that the large size of these animals implies excessive appetite. Overfeeding often leads and already massive mastiffs for obesity. Should be left constantly the dog only needs a bowl of clean water, while a bowl of food should be placed on the dog and cleaned after 15-20 minutes (and then washed).

A person training a Neapolitan mastiff should be dominant over the dog. Mastiffs have features of obstinacy and assertiveness, as well as excellent memory. That’s why never should punish by force the dog for flaws during execution teams. It is worth remembering that the desire to protect the owner and housing flowing in the blood of such dogs, therefore, with the right and not too assertive approach mastiffs will acquire the necessary skills and master teams. Daily activities with someone trusted by a mastiff will help become obedient to him, clearly understanding what he must fulfill exactly what the owner tells her. As traits that it’s somewhat difficult to learn mastiff; these dogs are often bored with long lessons. It should be remembered that overwork can be reflected in the dog’s soul teams in the future. Some owners of such dogs believe to Unfortunately, the norm of walking without a muzzle and a leash, especially They teach the animal to throw itself at cats (and even humans). Such not negligent, but even criminal behavior of the owners, as a rule, goes sideways. Uncontrollable and improperly trained mastiff, despite all his calm, will turn into a dangerous big monster.

The main diseases awaiting mastiffs are: joint dysplasia (which is fraught with osteoarthrosis), cardiomyopathy (which may be due to congenital heart disease, and also be caused by various infectious and bacterial diseases, etc., develops in many large, and especially elderly dogs), skin infections (caused by a tick – demodicosis, staphylococci – pyoderma, injuries, allergies, fleas – dermatitis, as well as other diseases). As can be seen, such diseases “fair” due to the size of the dog, its huge number skin folds and heavy weight. From early childhood should be shown Neapolitan baby doctor for examination. Must be carried out timely prevention of internal and external parasites, as well as vaccination as directed by a physician. Monitor proper nutrition dogs and good condition of her eyes, coat and skin. At proper care and respect for mastiffs live around 10-12 years old.