The breed of dogs Moscow watchdog for 60 years is one of the most popular among Russian owners. Massive and impressive dimensions that go in combination with kindness and loyalty to the owner, always bribe and distinguish dogs of this breed from many others. Dogs of this breed are tall (as a rule, not lower than 70 cm), large weight (not less than 45 kg), developed muscles and strong bones. Males superior to the female of this breed in its dimensions. Most often color dog breed Moscow watchdog is white with dark interspersed (black, brown, red). Dogs of this breed have characteristic hanging ears and wide muzzle, thick coat and large teeth. The life expectancy of dogs of this breed is 10-13 years old. Moscow Watchdog was bred by crossing others Breeds: St. Bernard, Caucasian Shepherd Dog, Russian Pintail Hound. The main the purpose for which the breeders have tried so hard is breed adaptability to Russian (sometimes severe) climatic conditions, as well as the ability to protect a trusted dog territory. Owners of dogs of the Moscow Watchdog breed mark them devotion and excellent security abilities. These animals are big hard workers who are not afraid of difficulties. Strong muscles and big growth allows dogs of this breed to be peculiar weapons guarding the owner’s territory. 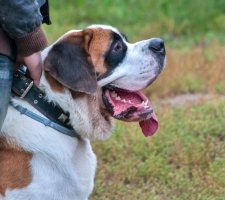 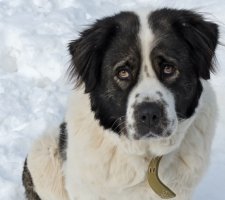 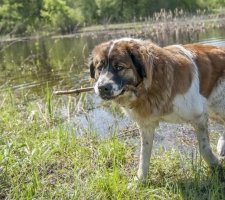 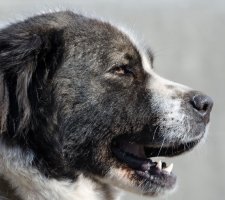 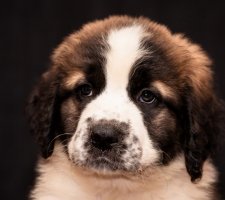 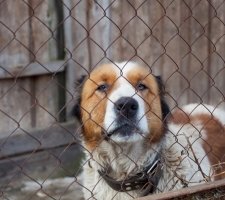 Photo of dogs of the Moscow Watchdog breed |

The name of the breed itself speaks of the main purpose of these dogs. It was with the aim of breeding guard dogs that such a breed was created in the second half of the twentieth century. After the second world war in the USSR, the need for breeding a new breed of dogs increased sharply – unpretentious, easy to care for and extremely responsible territory allotted to her. Ministry of Defense instructed military school Dog breeding recreate an unpretentious and physically developed breed. Moscow watchdogs are the brainchild of the Krasnaya Zvezda nursery, they combine the best qualities of their ancestors – the St. Bernards, Shepherd dogs and hounds. Demand for dogs of this breed is not running low already for many years, they became famous and loved not only in Russia, but also for abroad.

The nature of the Moscow Watchdog

Sad and a little melancholy, Moscow watchmen are a great friend to his master and members of his family. These animals characterized by endurance, fearlessness and the desire to protect the owner. The presence of such a dog allows owners to sleep peacefully country houses and those who live in the private sector. Moscow sentinels never give in to difficulties, they are always aimed to protect trusted territory. In addition, dog breeds Moscow watchdog gets along well with children and other animals, which captivates many owners. These dogs are very smart and devotees, they are always on guard of their human family. It is worth noting that the Moscow watchdog breed is not barking, barking is served only when necessary, when there is a threat from the outside. These dogs are well trained, obedient, making them high-class guards. Moscow Watchdog Loves movement, but easily adapts to the calm rhythm of life the owner. With the right training and competent approach, dogs such breeds become true friends of man, leaving indelible mark in the soul of man from such friendship. But not worth it fearlessly trust such animals the life and health of babies, Moscow watchdogs can harm a child reluctantly, because large dimensions. It is advisable to purchase such a dog for defense land and private ownership, as content Moscow watchmen in apartments is undesirable.

Such dogs can live even in a small apartment, at least a large plot of land, but they need more freedom and space. It is noteworthy that they get along well with people, obey them, but always ready to fight the enemy, encroaching on life and health the owner. These dogs molt twice a year, but their coat is constantly needs care. Luxurious silky coat should be exposed combing daily – ideally. But the realities of life are such that weekly “hairdressing services” for Moscow watchdogs may be the norm. The most important thing is to train the dog to brush (or pooderka) from an early age, then there will be no problems with an abundance of wool on furniture and clothing, and the animal will always be neat and beautiful. Is worth remember that neglect of combing threatens the appearance of tacklers that cause discomfort to the animal and make up a huge problem for the dog owner. Bathing these dogs should carried out at least 4 times a year, but can be produced manipulations more often if the animal is dirty. Moscow Watchdogs consider it a joy to swim in the open water, therefore the owner should not interfere with active pastime your dog. Bathing in ponds, rivers and lakes perfectly tempers and entertain these large dogs, so the owner is only on hand. The dog owner must take care of vaccinations (from gastroenteritis, plague, rabies, leptospirosis). Responsible attention to health will allow a four-legged friend stay as long as possible with the owner, and save from the grave burden of guilt of remorse when vaccination has not been given timely. Do not forget about the prevention of deworming and insecticidal methods of controlling parasites. For homestay Moscow watchdog owner should take care of the purchase bowls for food, brushes, a muzzle, a leash and a collar. Also worth Allow a place for the animal in the apartment, where there will not be too frequent human walking, draft and too much dried air. But it is preferable to keep dogs of this breed in the wild, providing them Aviary and box insulation. Moscow watchdogs are not bad carry heat and frost, which makes them universal. Walking with a dog of this breed means a two-time promenade, which will last at least 30-60 minutes. Feeding Moscow breed watchdog involves a bias on raw lean meat that will mixed with porridge or vegetables. In no case should you feed dogs with bony food – it will not bring benefits, but can harm thoroughly. Can be given as food to dogs of this breed sea fish, but river fish can provoke the appearance of worms. Sour-milk products can harmoniously fit into the dog’s diet, provided that she loves them.

From a very early age it is worth accustoming the dog to order and obedience, because such a breed can even inadvertently harm humans and other animals. The dog should know from 2-3 months elementary housekeeping teams (“You can’t!”, “Come to me!”, etc.). A distinctive feature of these animals is their long stay in childhood, which greatly complicates the training and upbringing. However, with the right approach, Moscow watchdogs may quickly understand the necessary skills, which usually consist in protection life and possessions of the owner. In the absence of patience and training skills you need to contact a specialist who will select the key to to the heart of the animal and can so affect Moscow watchdog, that she will become obedient, easily and quickly perceiving owner’s team. The nature of the dogs of this breed requires communication with adequate, calm, self-confident person. If translated Moscow guard’s mood in a human way, we can say that these animals are more fond of acting than barking.

The main weak points of dogs of this breed are considered diseases of the joints and endocrine system. Wrong feed and the contents are also fraught with the appearance of allergies. Allergy and the possible the obesity of these dogs can be adjusted by the owner, but dysplasia should be supervised by a doctor. Like all pets human, Moscow watchdog may be subject to invasive diseases, therefore it is necessary to pay attention and measures that will be aimed at eradicating and preventing the appearance of worms and fleas (or other parasites).