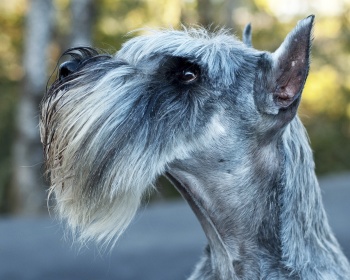 The Mittelschnauzer is the oldest of all schnauzers, and dates back to around the 14-15th century. These animals were bred as working and guard breed, and the name in translation means literally bearded dog, due to the fact that on the face is clearly visible beard. From these dogs, later breeds such as Giant Schnauzer or Giant Schnauzer and Miniature Schnauzer. Originally the breed was called a wire-haired pinscher.

Throughout the long years of its existence, the Mittelschnauzer in mainly served to farmers who used it as versatile dog capable of performing many different useful features. This breed is often depicted by artists Middle Ages, for example, Albrecht Dürer and Rembrandt.

Up until the 19th century, the Mittelschnauzer existed as one of several of the most popular breeds in Germany and neighboring states, however, it was in the 19th century that he attracted a large attention of professional German breeders and dog breeders. They are recognized the breed as one of the best purebred dogs in 1850 year.

The name of the breed came from a medium sized dog nicknamed “Schnauzer” – she was one of the winners at the exhibition in 1879 year in Hanover in Germany. From the beginning of the 20th century these dogs became Call Schnauzer everywhere. In 1842, Jeremiah Gottelf reasons known only to him alone, called so wire-haired German pinscher.

By the way, it is under the name “German Coated Pinscher” the dog received its first breed standard in Germany in 1880 (according to other sources – in 1884). At first there were many colors wool, but then the breeders brought out the main shades – the so-called the colors of black pepper and salt that formed the basis of the breed standard 1907 year.

During World War I, these dogs were used to the most important functions – as couriers and to help Red’s medical staff Cross, including for delivering first aid to the wounded on the field battlefield. In addition, they were also used in Germany to work in the police.

After the First World War, a huge wave of emigration began, and people leaving Germany, which in those years experienced a huge crisis, the dogs were taken away. Including the Mittelschnauzer – so they came to America and other countries.

The dog breed mittelschnauzer has proportional harmonious physique, standard, square, rounded, clearly pronounced chest and abdominal cavity. Hind legs several longer than the front ones. The neck is relatively long, the muzzle is correct, “with beard. “Ears either stop or remain untouched and hang down. on the sides of the head. They have a small length. The tail is short.

The breed of dogs Mittelschnauzer has a huge amount of useful qualities that have been developed over several centuries by successful and devotional service in the countryside. Accordingly, the breed developed the ability to adapt perfectly to various conditions environment, even in the cold winter, and in Germany winter is not allowed call it warm.

In addition, the dog is great as a guard, and not only can raise the alarm even when intruders penetrate at your site or apartment, but also do your best to to stop him or to take to flight.

Despite its not very large sizes. These dogs are enough brave, have real heroic courage, and always stand on protect your family and master. This is one of those few breeds which can remain completely in attention, so to speak on the alert, even when resting peacefully next to you on the couch, putting head to your knees. At the same time, it is very affectionate and loving animals that love people and love to be near them.

They perceive unfamiliar people through the prism of perception the owner, that is, if the person does not show negative, for the dog he will be neutral, if this is your good friend, the dog will accept him as well as his friend.

Mittelschnauzer is a breed that has a high intelligence, and perfectly understands the words of the owner. Despite some independence, this is a working dog, they are happy when involved in any important matter, in the service of man and his family as a whole. In addition, these pets have a high level of energy, and in their understanding of service is not that spend all day in a booth on a leash.

This should not be done at all – life on the chain is the worst thing can come up with. You will need to walk your dog at least an hour a day if you live in a city apartment, or better longer. If you live in the private sector, and most of the day the animal spends on the street, there are no such problems, however, you must devote time to their pet, for active games, training and training.

The schnauzer perceives children perfectly, loves to play with them and spend time. But, really, he will trust the child only from his family. These dogs, like most others rocks, previously recommended socialization and familiarity with various situations, other animals and people to broaden their horizons and formations of a more harmonious and open nature.

The breed of dogs Mittelschnauzer needs training, firstly, because it helps to realize energy, and secondly, because that the breed is predisposed to this. Their high level of intelligence allows you to learn both basic, simple and more complex teams.

In addition, you can prepare your pet for participation in various competitions and dog disciplines. When training it is important always maintain consistency and determination, rather In total, no problems in training will arise. The main thing is patience, sense of humor and the right approach, which is inextricably connected with sweets in your pocket and a positive attitude.

As for hair care, the Mittelschnauzer is a breed hairy, and requires combing once a week. Besides In addition, you must understand that wire-haired dogs are different from smooth-haired or long-haired, and twice a year when others breeds molt, wire-haired pets literally dumped.

That is, twice a year, when the coat fades, you can without labor and pain for a dog simply pluck hands wool from the whole body. In its place will grow a new, same tough.

The second option is to trim the wool on a regular basis, then she will lose her harsh nature and become soft. Also always you need to monitor the cleanliness of the ears and eyes of the animal, cut the claws three times a month and bathe the dog at least once a week.

Special care requires a dog’s beard that needs to be combed out. daily to prevent tangling and wash after each meal so that there is no food left in it.

The breed schnauzer belongs to dogs with a very good health, and according to recent studies 73% of these dogs almost never experience any special problems and rarely attend the vet.

But some diseases can still occur, including: 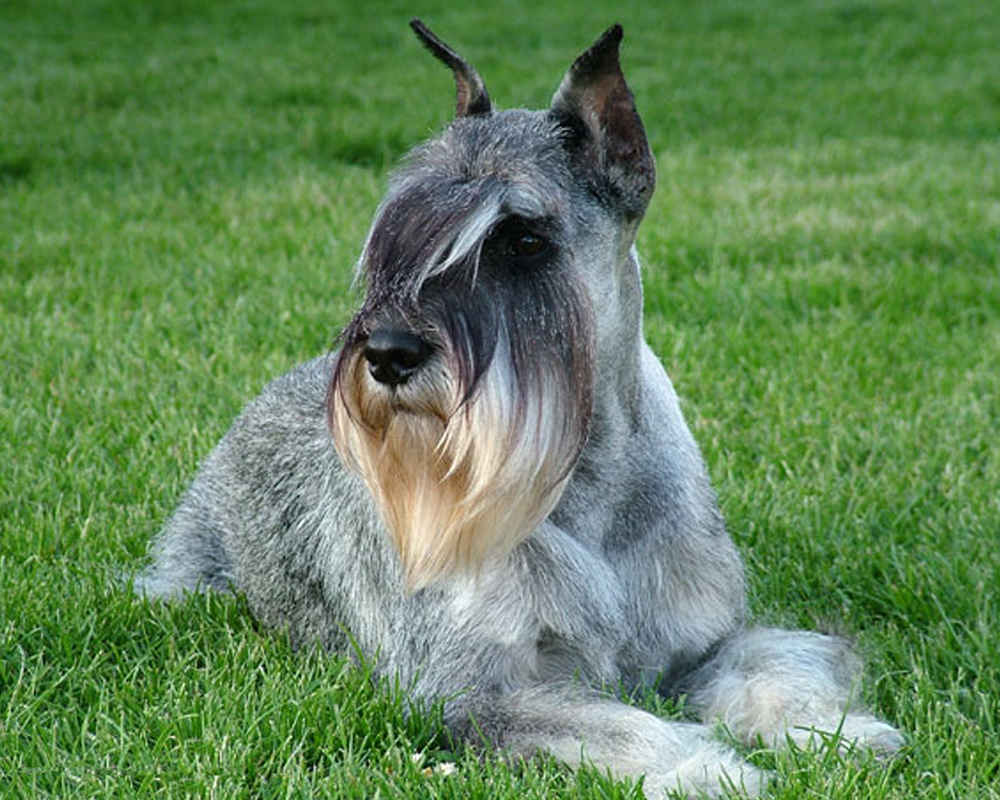 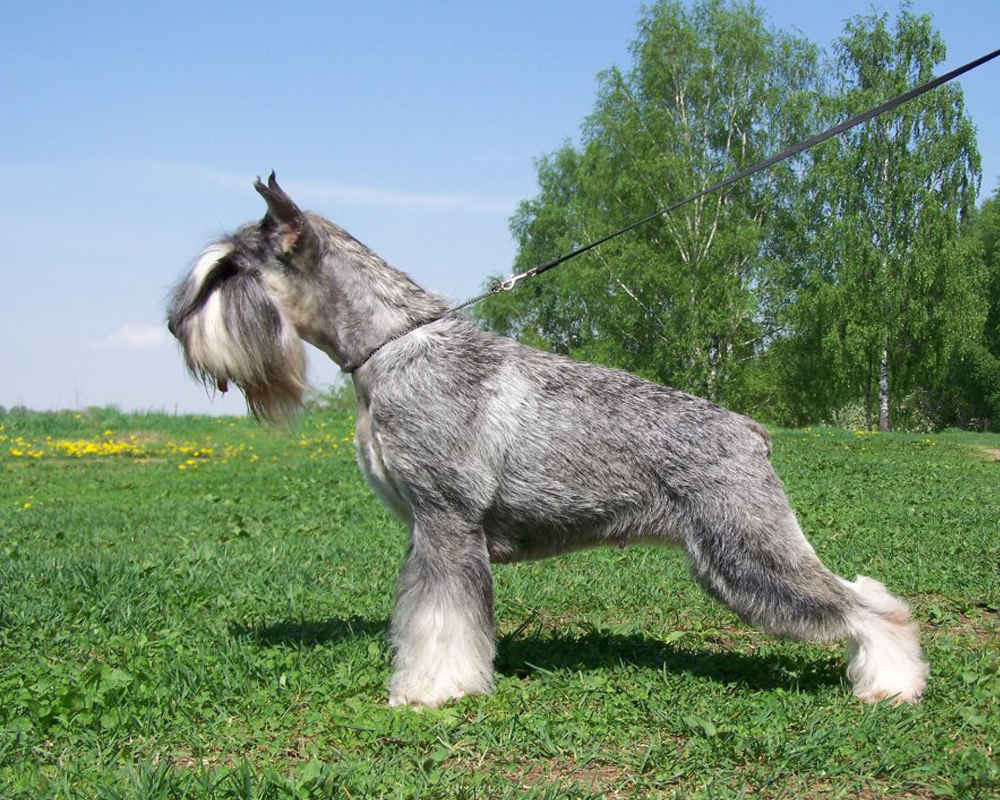 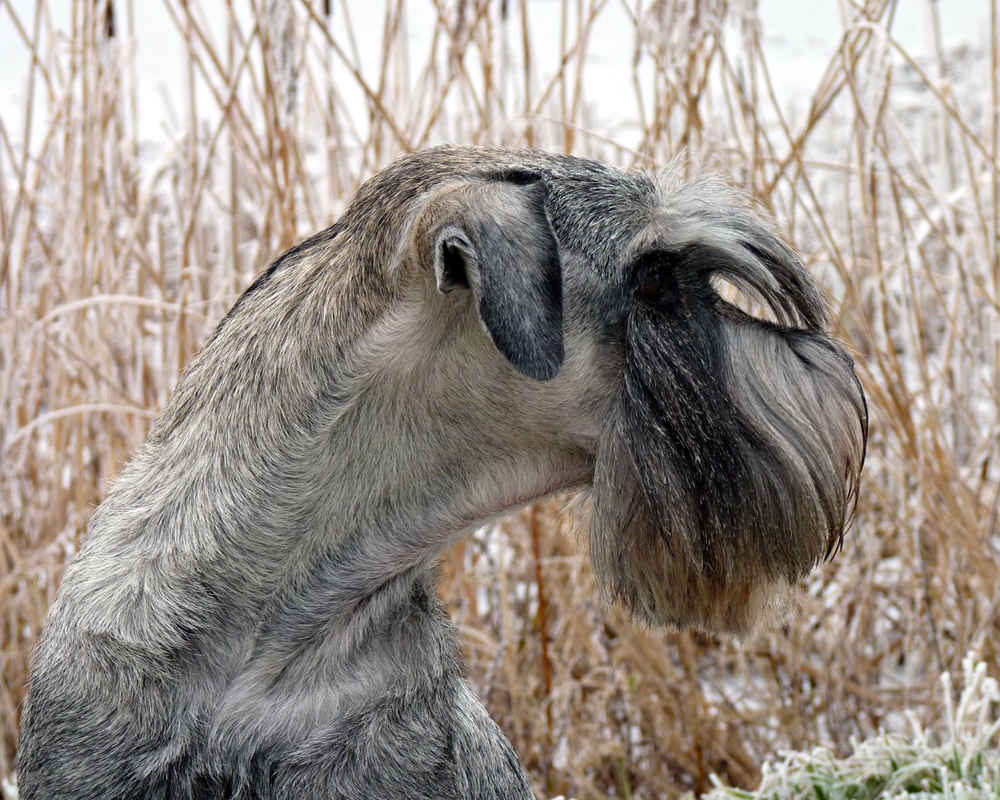 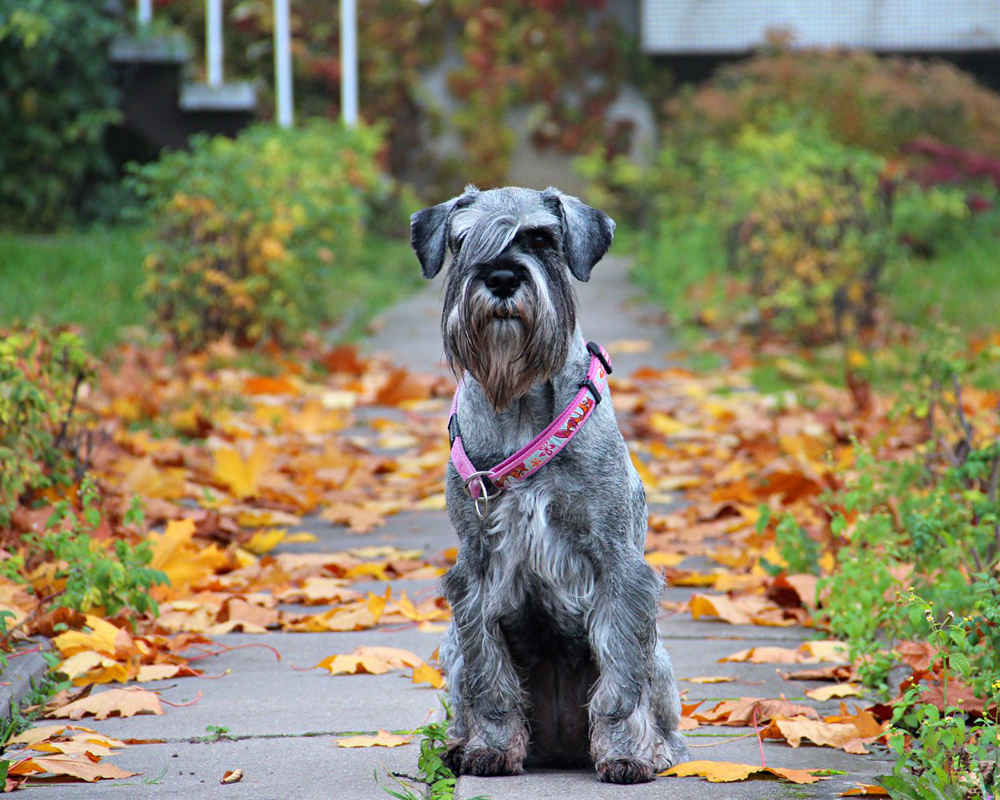 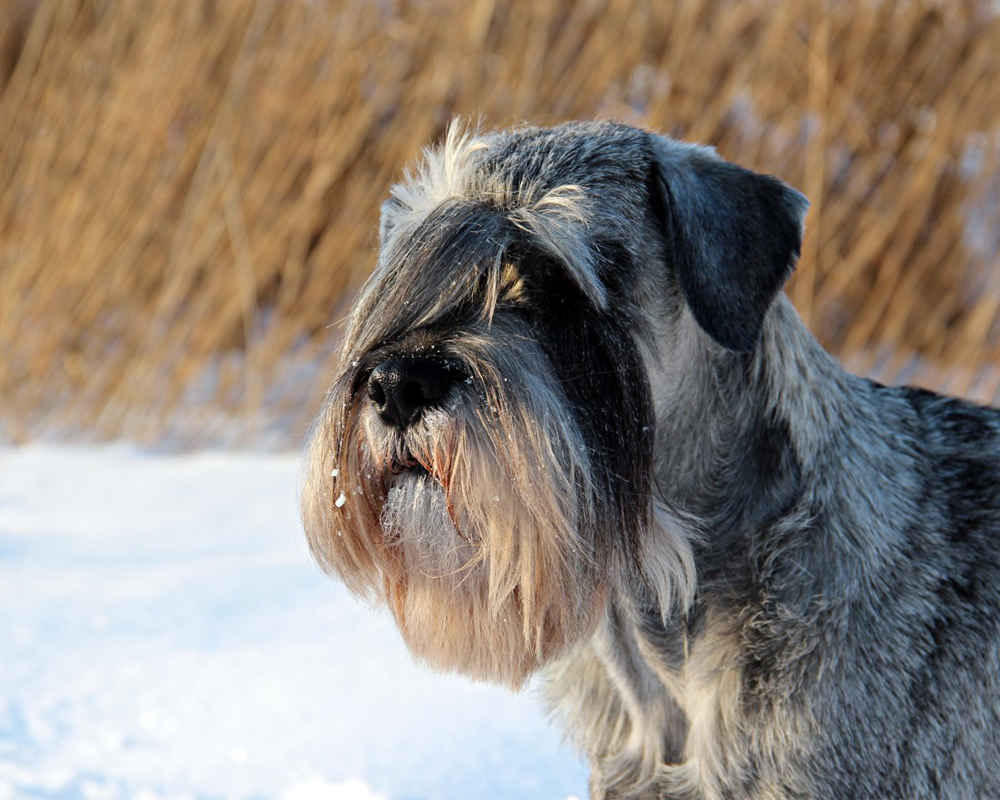 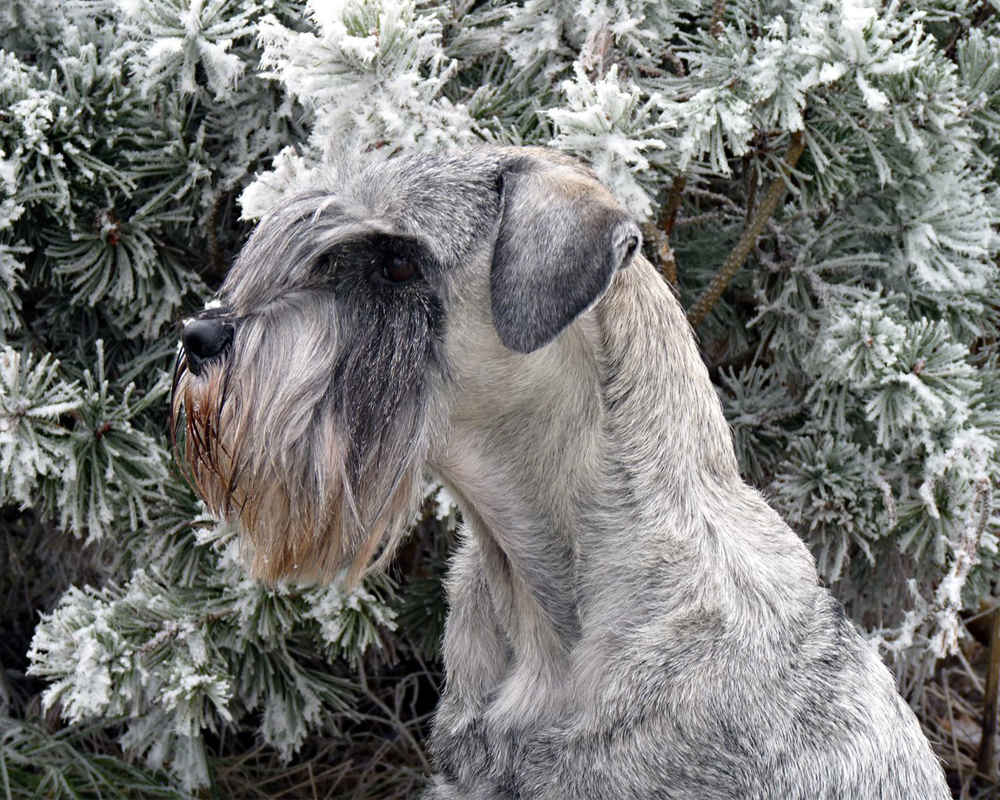 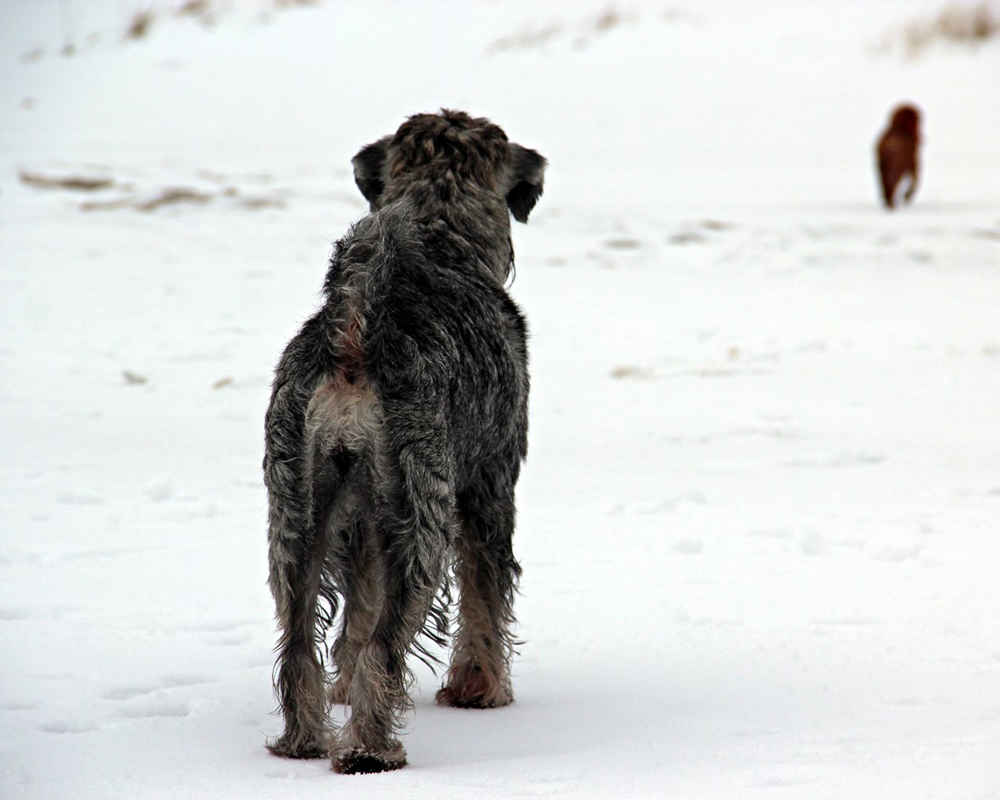 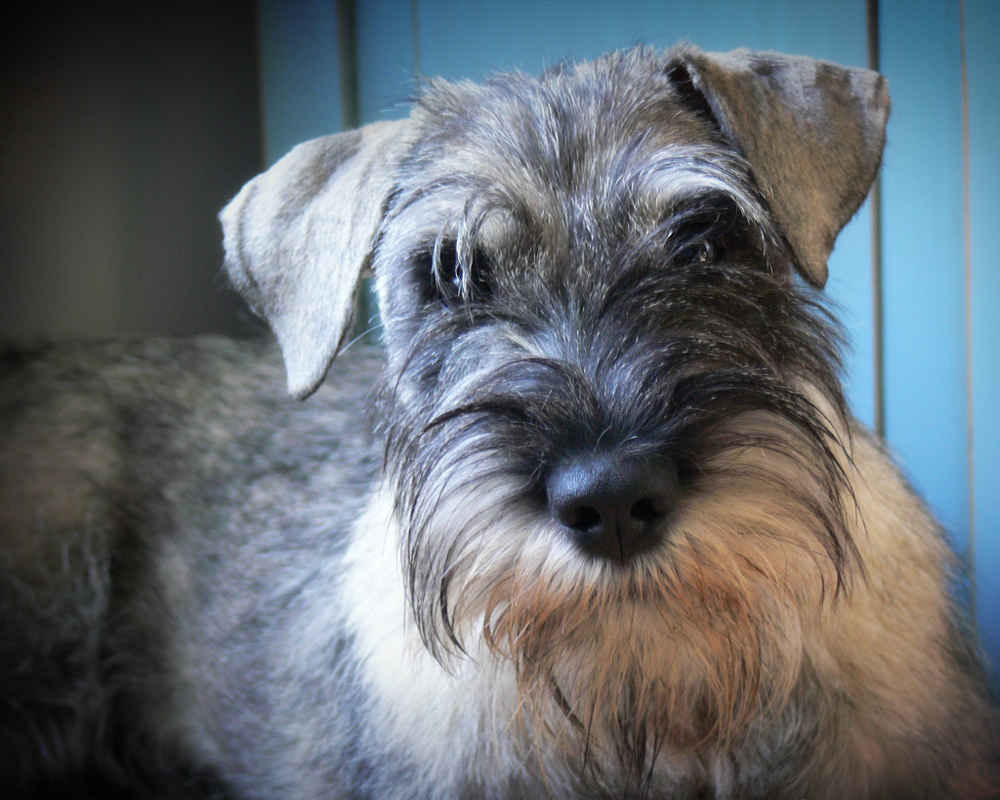