Dog birth requires a responsible approach to their preparation, especially if the owner of the animal decided to take part and help to be born to newborns. Pet Owner’s Efforts should be aimed at maintaining the health of the female and get viable offspring. Some dog owners consider that it is not necessary to interfere with the natural process of childbirth. But it is worth remembering that childbirth is stress for a bitch and she needs moral support. In addition, different breeds of animals have anatomical and physiological features fixed by selection that may obstruct childbirth.

How to prepare for childbirth

Before giving birth, you should consult a professional – no whether pathology, and whether the birth will pass safely. Need to take contact a veterinarian, in case something goes wrong. 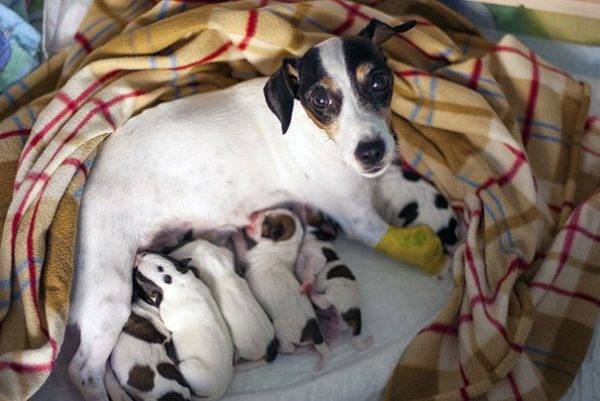 For 1.5 weeks before giving birth, you need to equip a “Rodzal” for the dog. It is necessary to carefully monitor the behavior of the animal so as not to miss the time of preparation for the approaching birth. The best thing choose a “generic nest” according to the size of the dog so that it is comfortable abut against walls during contractions.

On the perimeter of the box on the inside, it is necessary to strengthen the bar at a height corresponding to the lying bitch to exclude injury to puppies crawling along the bottom of the box. The bottom needs to be lined a soft, natural cloth in a light color so that spots are visible, and there was an opportunity to change the soiled diaper in time. Under the diaper it is better to put a tight mattress.

The outer wall of the box should be lower, but sills are needed, preventing puppies from leaving him. Cook in addition a separate box for sitting newborn puppies. To the bottom it is necessary to put a warm heating pad, covered with a diaper.

In addition, the dog should be accustomed to the box in advance, so that in a crucial moment she did not leave to give birth to a secluded place, which may be inconvenient to observe the birth of the host. Immediately before delivery, place in range necessary tools and medicines. Tools should be such:

Other drugs may be needed, a list of which should make up a veterinarian. The dog also needs to be prepared for childbirth:

It should be guided in those signs that indicate approaching birth, so as not to miss the moment of the appearance of the first puppy.

Read all about dog pregnancy, as well as about discharge in a pregnant dog.

Signs of an approaching birth

A couple of days before the birth, the dog is nervous, rushing around, shows signs of anxiety, as the rising abdominal pressure and still weak contractions hurt the dog. From generic pathways sticky mucous fluid – cork. Dog worried, licks the genital area. It becomes noticeable rapid, shallow breathing and increased palpitations.

A sign by which the owner can find out that before delivery few hours left, is a decrease in body temperature animal. If you put your hand on the dog’s belly, you’ll notice that the puppies have stopped moving means that fights will begin soon. If after these signs of contractions there are no more than a day, then you should seek help at a veterinary clinic.

During delivery, some dogs push while standing, but most occupies a characteristic position – lie on your side, with outstretched paws and back against the walls of the box. Hours before delivery amniotic fluid leaves which “disinfect” an exit way newborns. 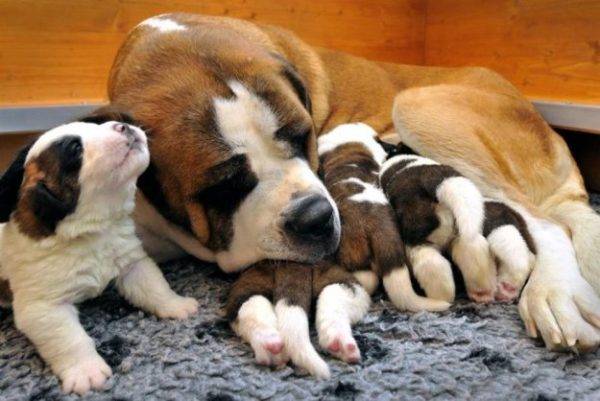 Amniotic fluid that fills external or “aqueous” bubble, serves to waterproof the puppy. The outer bubble bursts himself, in some cases the dog gnaws it. Should not try pierce the bubble so as not to damage the inner shell. After that, as the amniotic bubble opened, prolactin is released into the blood, stimulating contraction of the walls of the uterus and abdominal muscles.

Read more about the signs of childbirth in dogs.

Stages of the birth process

During the bout, the inner bubble “pushes” out. Sometimes the placenta, which is attached to the inner wall of the uterus and connects the umbilical cord with the puppy, is separated inside the birth paths and comes out with the bubble in which it is located. Most the difficult moment is the exit of the shoulders and withers – the widest part bodies outside the pelvic ring. After each the next puppy in fights there is a pause and only at the next the battle comes after.

Between two newborns, the muscles of the uterine wall contract, damaged blood vessels “subside”, which prevents bleeding. In this case, the uterus remains open, and at the next fight, a placenta comes out through it. If her way out is delayed, then the subsequent puppy, being born, pushes the last out.

A puppy is usually born in a bubble that the dog bursts. herself. Then he bites the umbilical cord. This is a natural instinct the dog should be allowed to do everything herself. The exception is breeds of dogs with a short muzzle. Their jaws are poorly developed, and they it is difficult to independently free the puppy from the surrounding bubble. At dogs with a disproportionately folded torso may arise difficulty reaching the umbilical cord until all puppies are born, so they need help with childbirth.

Dogs who are puppies for the first time may not eat properly the umbilical cord, yanking it, after they have already eaten. Not worth it let the female do this – this can lead to hernias.

The owner sometimes thinks that the dog is rude to newborn puppy – turns him over, pushes his nose, licks. This is normal behavior that stimulates everything. functions of the newborn – breathing, blood circulation, feces. A healthy puppy immediately looks for the nipple, some still connected umbilical cord, fall to the rear nipples. When this happens stimulation of uterine contractions and acceleration of labor.

The reflex action of a dog, which is inherent in all predators animals – eating the placenta. The question is discussed – is it worth it let the dog do this. There are many nutrients in the placenta substances and hormones that contribute to lactation, accelerate the birth activity. Experienced dog breeders believe that a bitch can be allowed eat no more than three afterbirths. More will result in colic, diarrhea. Perhaps that’s why veterinarians are against eating a bitch the placenta. They believe that unlike wild animals, domestic animals dogs are quite good nutrition and without a trace.

The owner must know how to give birth to a dog, so that, for example, track the release of newborn babies from amniotic fluid. Help the dog do this, and if she refuses, then release the puppy himself, wipe it warm with a natural cloth and then just start cutting umbilical cord. An experienced dog breeder will never let a puppy crawl with umbilical cord, otherwise umbilical cord injury may occur when pulling rings.

It is better to break the umbilical cord – there is a place on it where it is easy bursts, while the vessels fall and prevent bleeding, so as not to weaken the puppy. For this, the owner presses the umbilical cord 2-3 cm below the loop using a surgical clamp. it prevent the return of the placenta back into the body at the next scramble. For the next bout, carefully pull the tip umbilical cord and pull out the baby seat outside.

If the puppy does not breathe due to being in the airways blood or mucus, you must urgently release them and give the dog lick the puppy by stimulating breathing. Long birth can weaken the dog so much that she refuses to lick the puppies, then you need to do this with a heated towel to the owner. 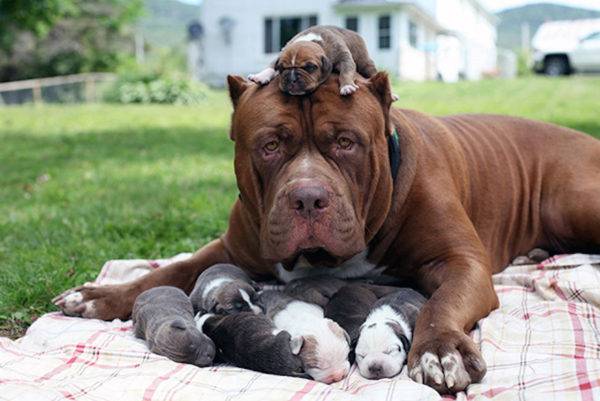 In addition, the owner must carefully monitor the quantity after There should be as many as puppies were born. Sometimes at the birth of the last litter of a puppy, the placenta may stay inside the uterus, which will cause its inflammation and severe condition in a dog. If the last could not be extracted, it is necessary urgently contact the veterinarian to administer the medicine, stimulating expulsion of the placenta.

Before delivery, it is recommended to undergo a radiography to find out exact number of puppies and subsequently control their output. Sometimes the last, weakest puppy cannot come out, and the dog too weak during childbirth. Then there is a chance that the puppy will die and blood poisoning will begin.

It is also important to know how to feed the dog after childbirth.

Puppies can be jailed for the duration of the birth, but it is better to leave them with dog, as it will be useful for both the bitch and the puppies. Attentive attitude to the dog and knowledge of the birth process – ensure health dog and offspring.