Each owner of a four-legged friend is faced with this the question is how to give your pet medicine. And not always like that the need arises in connection with the disease of the dog, because dogs need regular deworming. In addition, they often have to give vitamin and mineral preparations that can not to your pet’s taste. Tablets, capsules, liquid preparations dogs generally do not favor and in some cases the owner you must show all your ingenuity in order to feed darling like a “treat”. How to give a dog medicine correctly?

How to give your dog a pill, capsule or dragee

There are several options, each of which depends on certain factors. For example, certain medications can be given with food, and others before or after eating. There are also pills, which should not be bitten. In general, it is worth starting from data specified in the instructions. There are three main ways feeding the dog a capsule or tablets.

This is the easiest way in which the pet, without much of difficulties, can eat a medicine, of course, if the dog is not too delicate in matters of food and has excellent appetite. Pill or put a capsule in food, and the dog eats it with habitual diet.

However, often dogs, especially small ones, eat carefully, choosing what is tastier, or they eat only feed pellets, leaving a foreign object unattended. And, as it was already noted that not all medicines can be given at the same time with food.

It can be used if the drug can be given along with food. In this case, the drug is given along with a treat, placing a tablet in a piece of meat, boiled offal, a piece of minced meat. Usually dogs are happy to get a treat, even without a reason, but if if this is not practiced, then you can give the dog a couple of commands and reward for a good job.

If the pet can catch objects on the fly, you can roll several balls of minced meat and put in one of them “stuffing”, it is also made from cheese, although in a similar product hiding a surprise is harder.

It is worth throwing “test” balls containing no medicine after Why throw a ball of medicine already. Complete the fun should be 1-2 goodies without a catch. But here, there is a possibility that the pet will guess the owner’s intentions and spit out a pill will be on the floor. In this case, it is worth resorting to a tougher the third method.

It is used when gaming and rewarding methods have failed, or you need to supply the drug separately from food. Of course you can put the medicine on the dog’s tongue, but the likelihood that she voluntarily swallow it, low. If this happened, then the pet, definitely worthy of praise. If not, proceed according to the following algorithm:

There are situations, then the drug sticks to the surface of the tongue and does not go down the throat. In this case, water will help: it is typed into a syringe without a needle and flows into the dog’s cheeks from two sides. Dog will start to swallow and the tablet will push through. It doesn’t matter how the dog ate the medicine, in any case it should be praised.

Give the dog liquid medicine

Well, with pills everything is more or less clear, but what if is the liquid prescribed? Solution, syrup, suspension, decoction. They do not always have a pleasant taste. and aromas, so it’s still possible to persuade a pet to take them more difficult. 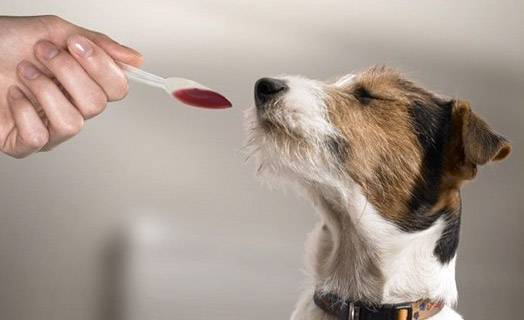 It is worth noting the fact that a spit out tablet may be raised and offered to the pet again, what to do with the liquid impossible. In addition, it is difficult to control the amount received means when it is partially swallowed, and some of it flows down the face.

Experts warn that just pour liquid into the mouth no animal! There are several methods for giving a dog medicinal fluid:

Dog treatment or preventative measures are necessary, therefore each owner must be able to properly drink his medicine pet. But often dogs very quickly understand good intentions their master and not only do not resist therapy, but also by all ways to help, accelerating their recovery.