German Shepherds are amazingly loyal to their owner, smart and noble dogs. Appearing at the end of the 19th century in Germany, German shepherds were mainly acquired as assistants in cattle driving and grazing. But their innate qualities are poise, obedience, quick response to non-standard situations have made German Shepherd dogs great service dogs, Guidelines for blind and visually impaired people. Often dogs like this breeds are acquired to protect the territory and as four-legged friend of the whole family. And in the vast majority of cases they cope with the tasks perfectly.

The appearance of dogs of this breed is well known to every resident of our countries, because these animals more often than others appear in television films and series. Germans have proportional addition, their structure is strong, muscular. The head of the shepherd has elongated wedge-shaped, neck massive, muscular, bottom the back is lowered to the croup, the limbs are long, parallel relative to each other. German shepherds are more than average triangular ears, almond-shaped honey-brown eyes, nose and lips have dark (black) pigmentation. German shepherds can be as long-haired (elongated coarse hair in areas ears, tail), and smooth-haired. The prevailing opinion is that long-haired shepherd dogs are mestizos (born from crossbreeding a German shepherd and a dog of a different breed) is not true, because smooth-haired parents are often born long-haired cubs. However, in 2010 long-haired shepherd dogs were recognized as a separate breed, although habits and main features character that in dogs with a shorter that with a longer the coat is absolutely identical. German Shepherd Dogs Growth reaches 60-65 cm, bitches – 55-60 cm. Weight of dogs varies from 35 to 45 kg in males and from 20 to 30 kg in females. Color dogs this rocks are quite diverse – plain black, black with marks of light (brown, fawn, yellow) shade, black-out. German Shepherd Life Span is 10-15 years old, in rare cases, dogs can cross 15 year milestone. 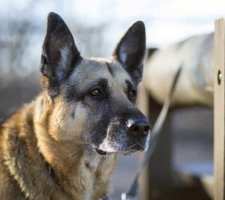 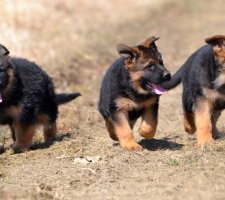 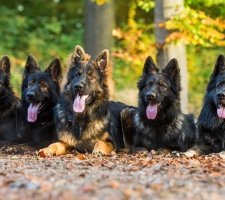 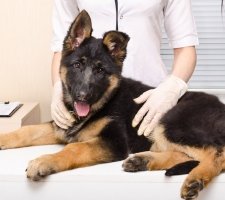 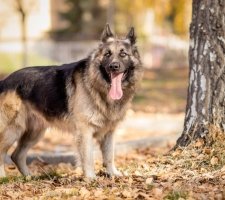 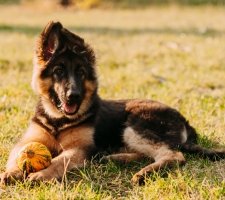 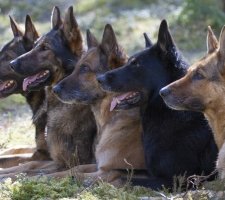 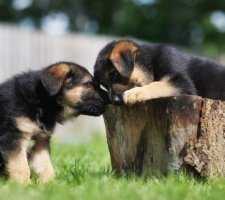 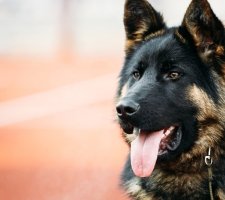 The most significant person who gave almost 40 years of his life to the benefit of the appearance and prosperity of the breed, it is considered to be a retired captain of the German cavalry named Max Emil Frederick von Stefanitz. Military career was chosen by von Stefanitz at will mothers, while he himself dreamed of farming. Not once the young captain watched the grazing large flocks of sheep and shepherd dogs, both in size and in number inferior to artiodactyls. But the dogs dealt with the entrusted to them herds brilliantly – without too much fuss, quickly without letting the sheep wander around. At that time (approximately 1880-1890 GG) all shepherd dogs were called shepherd dogs (from the word shepherd – sheep shepherd), which did not mean that all animals for grazing were one breed. The idea of von Stefanitz was to show the world a breed that combines the best qualities of a shepherd time. Moreover, in addition to help in shepherding, the dog, according to von Stefanitsa was supposed to possess such features that could become valuable in official business. And these qualities were as follows: stamina, obedience, fidelity, quick wit, skill stand up for the flock and shepherd. Von Stefanitz, who left the military service, engaged in the close breeding of a new breed, founding in the 1890s famous German Shepherd Society. Crossing the best individuals the founder of the breed perfected the process, noting the slightest nuances, which influenced the quality of the offspring. In 1899, von Stefanitz acquired at the exhibition a shepherd dog, a dog, which was named Horand von Grafrat. It was this dog that was entered in the studbook of the Society first, becoming the “father” of German shepherds. In this animal united all the qualities that von Stefanitz liked so much and were so necessary for shepherding. Horand subsequently interbred with bitches suitable for him in type and temperament, and Stefanitz revealed defects in puppies, observed the characteristics of young animals. Dogs Societies constantly participated in exhibitions where winners became the best representatives of the breed. Number of participants Society grew over time, and interest in German shepherds grew. Gradually, these dogs gained popularity in the ranks of the police, helping track down criminals. Over time, they began to act on military service, making a huge contribution during the First World War – they searched for wounded soldiers, helped in patrolling, guard. The founder of the breed was personally involved in breeding problems. work and maintaining the official qualities of the German shepherd when dishonest businessmen tried to cross dogs without the necessary for this knowledge. The result of uncontrolled work became puppies with unstable psyche, deviations in physical development. Von Stefanitz did his best to breed happened by the rules. For example, to improve the quality and uniformly type dogs it was customary to cross closely related individuals. The breed became truly popular in the 1920s, and decline fell on the period of World War II, when the society of Germany and everything the world was far from the problems of breeding and improving all breeds dogs. In 1937, virtually removed from the cause by the Nazis of his life, von Stefanitz passed away. And only in peacetime, after the cessation of hostilities, the followers of his cause revived and kept the breed bit by bit, so the German shepherds by are rightfully popular in all countries.

German shepherds have excellent intelligence, they are obedient, are true, with proper upbringing, they are kindly not only to the owner, but also to all family members, do not offend others pets. They are active, playful (even in advanced age), require frequent communication with a person. Newcomers are cautious, but not malicious, as if sorting out who is in front of them – friend or foe. Their intuition and intuition are well developed. German shepherd dogs combine two important criteria that make them universal both for official purposes and for reverent friendship with human – these dogs are good-natured, but they clearly understand the tasks assigned to them in the form of protecting the lives entrusted to them, territories, etc .. These dogs have a restrained disposition, in their character, as a rule, there are no special outbursts of negative mood. Those German Shepherds whose primary calling is service in power structures, so obedient and sociable, that easily execute the commands of any person assigned to them person. Dogs living in the family become real friends of a person, they quickly get used to the owner, love him until self-forgetfulness. The Germans can be quite noisy, raising barking, when something is alarmed or wary.

Such dogs require an active lifestyle, so the owner should take daily walks with the German (preferably 2-3 times a day for at least 1 hour), outdoor games are required. It’s great if the owner of the dog has the opportunity nature (in the forest, park, grove, etc.), these animals feel great yourself in the wild. It is best that such a dog live with a person who can devote enough time to her walks and socializing. They can be kept both in the apartment and in outdoor cages, provided that the owner takes care of the availability insulated booths and the absence of drafts. Sheepdog’s coat is enough thick and long, which especially during molting can contribute to the appearance of hair lumps on the floor, furniture. Regular combing (at least 3-4 times a week), to which the dog should be trained with early age will help to avoid such a problem. By the way, the Germans love the combing procedure, so for them it will be combining business with pleasure. Dog bathing should not carried out more often 2-3 times a year, especially in cases where the animal is not kept in the apartment. Dog claws should get a haircut 1-2 times a month, such a procedure can be carried out the owner himself or else be entrusted to the groomer who along with clipping, it will take care of a comprehensive care to animals. The owner should pay attention to the state of health eye, German ears, monitor gait, temperature, general the state and mood of the pet. And if necessary Contact your veterinarian without trying to self-medicate. German Shepherd Dog Dry feed (preferably super-premium or holistic). If the owner will wish to independently think through the menu for the four-legged friend, it’s worth remembering that dogs must present natural lean meat (more than 30%), offal, cottage cheese, dairy products, cereals (oatmeal, rice), raw and boiled vegetables. From sharp tubular bones, potatoes, food, flavored with spices, should be discarded.

Teaching a German baby should begin as early as possible. Not worth it let even a small fluffy lump dictate its conditions. The dog, who realized that she was allowed to play pranks, probably in the future will grow dominant over its owner. That’s why already from 1.5 to 2 months, the animal should be vaccinated with the rules of good behavior, teach elementary teams. Moreover, as praise for successful work should use delicious goodies and kind words. Punish an animal with beatings unacceptable in childhood or adulthood. Training may start from 3-4 months, but in this case, classes should not last long – no more than 15-20 minutes several times a day. Sometimes German Shepherd training begins with six months. Whoever neither was the “teacher” of the dog – a professional instructor or his own master, you always need the animal to get along well and obey first of all its owner. And for this you should invest a lot forces into the puppy’s socialization process. And the sooner the owner starts instill obedience lessons to a dog, especially an executive dog will increase.

Dogs purchased from good breeders rarely have weak health. Sometimes German shepherds suffer from hip dysplasia joints, but this problem can haunt not only large dogs, but also small ones. In Germans, dysplasia in rare cases can to take on severe forms. Timely examination by a doctor, x-ray pictures and proper treatment in the early stages of the disease will allow the dog live a full life without limping and falling on its paws. some German shepherds have a relentless appetite, which no wonder with their love of physical activity. Owner not you should feed the dog, because shepherd dogs are prone to rapid weight gain and obesity, which leads to many problems. Germans sometimes suffer from diseases caused by ear inflammation, therefore the owner should closely monitor the dog when it shakes head or tilts it unnaturally to one side if appear uncharacteristic discharge from the auricles. But in most cases Shepherd dogs – healthy creatures that tolerate differences temperatures, they are physically developed, active. Timely visit to the veterinarian, vaccination, prevention of parasites allow the owner has a healthy dog.