German yagd terriers (aka German hunting terriers) – dogs, whose main purpose is normal fox hunting, badgers, hares, beavers, marmots. But they are also not bad in quality. assistants during the bird hunt (they track and feed the bird), due to fearlessness of water and high endurance Terrier. Small in size, these dogs are often injected into delusion of people who do not know anything about the breed. Rarely reaching height above 40 cm, the terrier protect the territory and show success in the hunt no worse than their fellow dogs large sizes. The weight of dogs ranges from 9-12 kg in males and 7-9 kg in bitches. In addition, this breed includes dogs of two types – smooth and wire-haired yagd terriers. Both kinds are enough unpretentious, but wire-haired yagd terriers have a longer and stiff hair (and a characteristic beard), which may require more care than their smooth-haired counterparts. Dogs such breeds have strong and developed teeth, closely set eyes, semi-permanent ears. Despite their short stature, yagd terriers have strong muscles, strong limbs. German tail hunting terriers stop at one third of its original lengths. Dog color is almost always black or black and tan in the areas of eyebrows, muzzle, paws, chest, under the tail. Breed standard does not allow the brown dogs of the German Yagdterrier breed, but individuals of this shade are sometimes found in litters. The life expectancy of German hunting terriers is 12-15 years old.

Photo of the terrier: 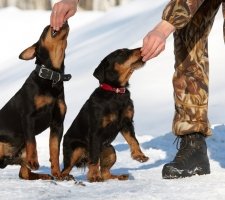 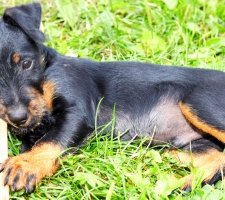 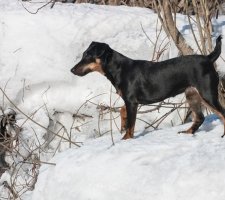 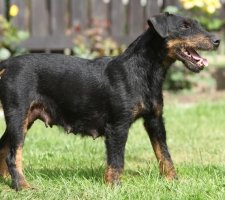 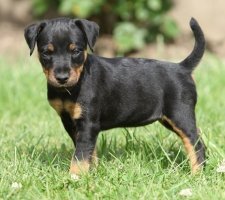 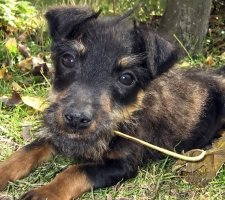 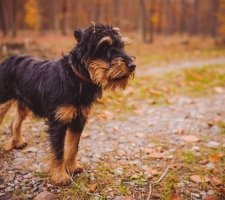 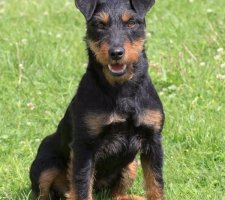 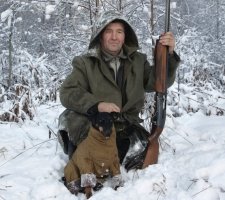 This breed was bred in the 30s of the XX century in Germany. The breed standard was first adopted in 1934. Purpose of creating the breed was to create such dogs that would target hunting, with a little attention was paid to the appearance. Initially, breeders decided to create a breed that It will be unpretentious in leaving, not encroaching on participation in exhibitions. The ancestors of the German lagd terriers are the Fox Terriers – tireless game hunters. Now, looking at the photos of the terrier and Fox Terriers, the outward similarity of the breeds is obvious. But there is also distinctive features – the standard of the breed of yagd terriers implies black and tan color, sometimes with a small speck in the area of the chest and paws, while the fox terriers possess mainly white color interspersed with red and black marks. Also by The size and weight of the yagd terriers are somewhat superior to their ancestors. But dogs of both breeds are excellent and uncompromising hunters, although the main characters of this article they are the most furious hunters. In addition to the fox terriers in the formation breeds involved Old English terriers, Welsh terriers. IN USSR �German hunting terriers appeared in the 1970s. Thanks unpretentious in content, small size and excellent game tracking skills, yagd terriers acquired in a short time popularity among hunters of the Soviet Union.

The nature of the yagd terrier

Dogs of this breed do not give in to difficulties, often attack during the hunt for animals, significantly exceeding them in size. The dog owner must pay special attention to training from the very early age, as ill-mannered German yagd terriers can harm both the owner and other animals. Should not be underestimated these dogs because of their short stature, weight. Thanks to a strong grip, developed muscles and flair these animals are real alive weapons, so their education should be given great attention. Jagd terriers rarely make friends as home friends. mission – tracking game. In the hunt they are stubborn, not terrible weather, sensing the beast, yagd terriers never miss his. Before acquiring a German hunting game, you should read a lot of literature regarding his education, consult experienced breeders. Preferably The yagd terrier lived in a family where there are no small children and other animals. (cats, rodents, other dogs of small breeds). Hunting instinct may provoke the yagd terrier to harm a person or animal, even in cases of play, these dogs are quite dangerous. They like as a rule, never voluntarily release their prey, which may lead to real tragedy for the owner. In addition, these dogs choose one leader for themselves – their master, whose teams perform rigorously, and often relate to other household members cool, as if down.

Caring for this breed does not provide any special nuances. They should be bathed with special shampoo no more than 6-7 times per year if there are no severe pollution. By the way, they adore swimming in open water. The owner must periodically comb dogs with special brushes to remove dead particles of skin and coat. Even during molting, these animals do not cause special problems in care (especially smooth-haired Terrier). You should also pay attention to the condition of the eyes, ears. German hunting terriers. At the slightest deviation from the norm it is better to consult with a specialist. Routine inspection desirable at least 2 times a year. Jagdterriers can live in conditions of the apartment, and in the fresh air. In the first case, for them the room must have a certain space, equipped with a berth, bowls for food and water, large number of rubber toys. Dogs kept in the apartment, require daily walking, and they are tireless and very active, therefore, it is preferable to perform the exercise for at least 1-2 hours (or more if the season allows and the opportunity for the owner). Dogs, which are kept in the yard must have a spacious (according to their size) booth, which should be insulated. In addition, if the animal does not have an aviary and freely walks throughout territory of ownership, the owner should be confident in the foundation and fortress fence. Jagd terriers are by nature very gambling and prone to undermining, they can easily run away if they smell “enemy”. Outdoor content complicates the process somewhat care – outdoor dogs are more difficult to bathe (because of the possibility catch a cold), they are more prone to invasive diseases.

The training of German hunting terriers should start from 6-10 month old, depending on the nature of the animal, degree trust in the trainer, features of the dog’s development process can take at least six months. Training twice a day for 1 hour – morning and evening, before eating or a few hours after. It is advisable that the dog trust the trainer, for this it is necessary to establish contact between man and animal. Main the task of training is to obtain the dog hunting skills. Training and training of yagd terriers is based on methods of excitement and inhibition of the nervous system of the animal. Should never be overly overload the animal, trying to teach him many teams at the same time. If elementary instruction training may be carried out if desired by an inexperienced owner then complex skills should be vaccinated by a specialist (or at least under his supervision, according his advice). To do this, it is advisable to find a hunting club dog breeding, where you can count on help in training. Experienced instructors will talk about the intricacies of the learning process of such dogs. The advantages of contacting such a club are not only in the availability of specialists, because there they will also provide training site, which is especially true for those owners who do not have the ability to train a dog in the fresh air every day, far from the tracks, in a large area. It is worth remembering that training these dogs is a must. Untrained (or improperly trained) the yagd terrier becomes uncontrollable, overly aggressive, threatening the life and health of people and animals.

The purpose of breeding was to get hardy, easily addictive to the difficult conditions of the dog. Despite their small size, they extremely strong and excellent in health. Therefore, for timely prevention of “canine” diseases (plague, enteritis, rabies), deworming, getting rid of external parasites can have a completely healthy dog. Undoubtedly, even the robust yagd terriers may become ill and die, but routine examinations at veterinarian, vaccination, strict monitoring of health status allow you to prevent the appearance of many diseases. For yagd terriers correctly selected diet is important. As a meal can be used both natural food, and dry or wet production feed. You must consider the composition of the finished products, they should not contain preservatives and dyes, emphasis in the feed should be on meat and offal. It is advisable to agree diet with a veterinarian, sometimes dogs need food developed with taking into account the age of the animal or any characteristics of the body (gastrointestinal tract disorders, for those prone to allergies, etc.). Vitamin complexes will also be needed as a source of shiny wool, clear eyes and excellent health.