Athletic English mastiffs (the breed is also simply known like a mastiff) – real champions in size (their weight can exceed the mark of 100 kg, the growth is at least 70-75 cm). These dogs can act as companions, watchmen, and the guards. Properly trained mastiffs are balanced, calm and very reliable person friends. Homeland of english Mastiff is UK, but not so simple in breed history. There is an opinion that already in the V-VI century BC mastiff-like dogs existed. Evidence of this are numerous bas-reliefs found during the work of archaeologists. IN far ancestors of mastiffs were used to participate in numerous wars and hunting. And today, English mastiffs despite such large dimensions, perfectly play the role pets. There is no fuss in them, but if necessary, these giants can stand not only for themselves, but also for the owner. 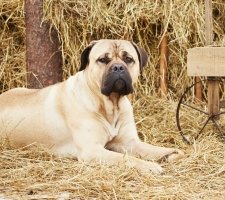 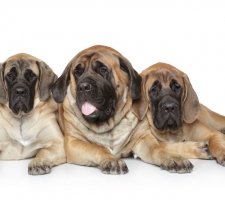 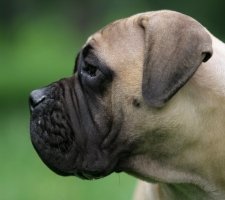 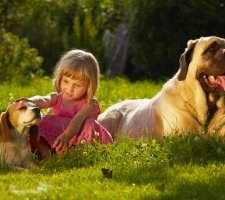 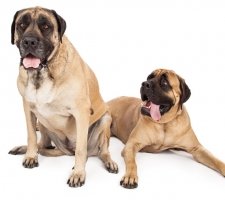 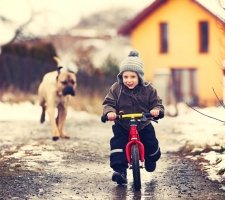 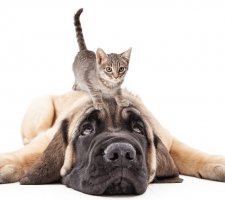 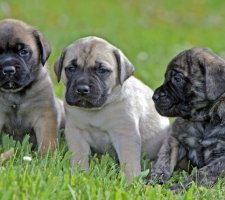 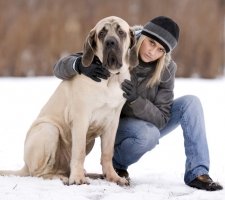 English mastiffs belong to molossians – large dogo-shaped Etching dogs native to Greece, Assyria and Egypt (name “Molossians” came from the people of Molossians (or Molossians) – residents Ancient Greece). Oldest ancestors of modern english Mastiffs consider Tibetan Mastiffs – ancient dogs from Central Asia, also common in many countries of the Ancient World (Persia, Assyria, Babylon, etc.). Tibetan dogs performing at themselves at home working functions, massively interbreeding with dogs from Asian countries. Puppies born from such unions were large, massive, hardy, often aggressive. Used ancient mastiff dogs are not only for helping people in the household and housing protection. These big guys fought along with ordinary soldiers in campaigns of Alexander the Great on Persia (who became the ruler of Asia). In the UK, mastiff-shaped dogs (different in exterior, destination, type of character) were brought in by the Celts around the 4th century BC. Numerous wars have honed and character of strong, ferocious dogs. For example, the invasion of the Romans (I century BC), with which the British mastiffs first fought, and then served them faithfully, participating in gladiatorial fights and entertaining the audience while bullying big game, made These dogs are popular on the Apennine Peninsula. Germanic Saxon tribes invading Britain in the 4th century AD brought into the territory of the island state their massive military dogs. Naturally, over time there was a mixing of blood mastiffs with saki dogs. Around the 20th Century Great Britain “sheltered” another four-legged – Alans imported from Europe. More or less systematic breeding of mastiffs in the UK It began only by the 15th century. But after three centuries, massive mastiffs ceased to be revered, presumably due to the ban animal harassment in the British Isles. To preserve the breed almost at the end of the XIX century to the surviving small specimens of mastiffs from the UK began to rush the blood of the St. Bernards, Danish dogs, Newfoundlands and other dogs, then the world recognized modern type of English mastiffs officially recognized in 1883. But ahead of the English strong mastiffs were still difficult times – World wars when the numbers of these dogs are practically approaching zero. It wasn’t until the 1950s that anything stopped threaten, since from that moment many clubs appeared lovers of such dogs, kennels around the world.

English mastiffs – quite calm, even phlegmatic dogs, good-natured to their owners. They are not aggressive, although uninvited guests are wary and incredulously. They perfectly understand the intentions of the house. a man came – good or evil. These powerful dogs get along well with the owner’s children, calmly treat the cats and dogs of others rocks. English mastiffs, as a rule, never show character idle. But they have one feature – stubbornness, therefore before you force the dog to do anything, you need to interest. They are strongly attached to the owners, but apparently it is sometimes imperceptibly. However, mastiffs from the UK are wonderful and faithful companions of man, monogamous, ready to sacrifice their lives for the sake of their beloved owner. IN there is no fussiness, importunity, excessive mobility. These dogs patient, reliable, real guardians of the house and family.

Living such a large dog in an urban small apartment hard to imagine. Therefore, as a home for the mastiff a volatile aviary is suitable, which the dog can if necessary leave to go around the yard, a little warmed up. Apartment the content is also not encouraged by the fact that these dogs are not are active by nature, they enjoy spending time in a light nap, as if pondering something. So the passive image life can lead to weight gain. English mastiffs prefer long, but leisurely exercises as walking with the owner. The wool of English mastiffs should be exposed combing out several times a week. They cannot be overly recognized. shedding, but neglecting to remove old wool will be faced not only with shreds of hairs on clothes, but also with other problems (skin, parasitic diseases). Bathe these giants about 2-3 times a year in warm time, and then carefully dried and combed thoroughly. care includes ear cleaning (weekly with a cotton swab, dampened with water or a special ear hygiene product shells), eyes (daily or several times a week with a cotton pad, moistened with water), teeth (using a toothbrush for dogs and a toothbrush paste daily), clipping (once every 2 weeks). Besides, after walking the dog’s face should be wiped, because in folds skin accumulates dirt. The same procedure should be done. after eating. As a food, English mastiffs can receive as natural food prepared by a caring owner, as well as ready-made feed for large and giant breeds. In choise balanced diet is important. If the owner has enough time, then as part of the mastiff menu should be enough protein (meat and offal), which is important for the immune system, proper muscle development. Also in a natural diet must be present vegetables, cereals, dairy products (cottage cheese). Dry industrial feed is extremely convenient for feeding – it does not deteriorate for a long time, it contains all the vitamins and minerals (and natural feeding will require vitamin medications prescribed by your doctor). But as a finished feed preference is given to feed of the highest quality – not lower than the level extra premium (or premium at worst) which are expensive but useful. A puppy (up to 4 months) is fed up to 5 times a day, up to six months – 4 once a day, up to 8-10 months. – 3 times a day, and by a year and a half years the animal receives food twice a day. Animal bowls should be washed by the owner (after each meal). Dog should not need clean water.

English mastiffs catch teams very quickly and well, but they can act contrary to owner if not sufficient interest in what is happening – whether it’s executing commands or any game. They first evaluate whether they need to perform requirements of the owner. In the process of raising a puppy, do not apply rudeness and strength, on the contrary, the owner must put it yourself to a leading position, and instruments of influence on the animal make a voice (tone, timbre, volume, intonation), praise and goodies. The first time, while the puppy is still not strong enough and used to a new place of residence, you can just teach him to good manners and the simplest teams, as well as a leash and a collar. When all vaccinations will be given, and the baby will begin to be fearless to the outside world, the owner has the right to take it with him (of course, not down from the leash) anywhere – for a walk, in nature. The animal can be trained in commands by the owner himself or be bailed to an experienced trainer instructor. But leave Without teaching English mastiffs in general, it is categorically impossible. Yes, they are calm, even sometimes lazy, but if necessary they can show the character that is fraught with misfortunes for others because of too respectable size dogs.