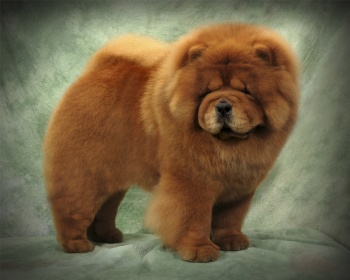 The breed of Chow Chow dogs (sometimes they say Chao Chao) has an appearance, due to which it is difficult to confuse with another dog. There are not many who knows, but recent studies have shown that these dogs come from Mongolia and northern China, and the age of the breed is over 2000 years old. At least talk about it pottery images dating from 200-260 BC Their closest relatives are wolves.

However, establish the exact age of origin of the breed at today is not possible, and scientists believe that Chow Chows can have a much more ancient history. Also have opinions that these dogs have the blood of a Tibetan mastiff. In ancient China, the Chow Chow breed was used as guard dogs, as well as for hunting.

There is even a legend according to which one of the Chinese emperors contained a huge flock of 2500 individuals. Whole dog army, agree. However, according to the same legend of these dogs were not used for military purposes, but just for hunting, although it’s probably hard for us to imagine what kind of hunting with 2500 dogs. But, do not think that the use of Chow Chow limited only to hunting and watchdog functions – this breed It has a thick, fluffy fur that was used to decorate clothes. In addition, their meat was considered a real delicacy. Horror – what and talk.

By the way, in China the breed bore completely different names – dog bear (xiang go), a dog with a black tongue (hei shi-tu), wolf dog (lang guo) and canton dog (guangdong guo). Its present the name of the breed found in the late XVII century, when British merchants became take along with another load and dogs, which, by the way, they called “Bearish”. Chinese goods (according to other sources – a place for cargo) for some reason they called Chow Chow, moreover, at first it didn’t concern specifically dogs.

However, later the name stuck, and already in 1781 naturalist scientist Gilbert White described these dogs in a book “The Natural History and Antiquities of Selborn,” and he named them in a book just like a chow chow. However, stable supplies from China and the natural population arose much later, only in times Queen Victoria

The UK Chow Chow Dog Club was founded in 1895. Is worth note that dogs described by Gilbert White are two hundred years old ago, practically no different from the current ones. A dark blue according to the Chinese legend in dogs, this is where: when the Gods created the world, they painted the sky blue – thick drops of paint fell from firmament, and Chow Chow caught them with his furry mouth.

The dog of the Chow Chow breed is large and similar to little decorative bear. The coat is long, thick, dense covers the head, ears and face of the dog. Flattened muzzle, ears small, covered with wool, erect. The physique is powerful, limbs of medium length, muscular, tail lying on the back. Gait specific, as if “on stilts” because of the hind legs, which the dog almost does not straighten when walking. Why is unknown.

The Chow Chow breed has a peculiar character that combines yourself complaisance and obstinacy. It would seem that these qualities impossible to combine in one living being, however, they Combined in this dog is quite harmonious. Also, they have internal independence and pride, and the landlord must value these quality, since getting rid of them will not work in any way. Independence in this case is manifested rather than as disobedience, but as a general impression that the dog is somewhat suspended and as if to herself.

At the same time, Chow Chows are always happy to play with their loved ones and master, treat them with friendliness and love. Have high intelligence, understand a person well. They have a normal level. energy, they need walks and physical activity. It is important also because this breed is prone to gain weight, in addition, if the chow-chow does not have an outlet for its energy, it is sad and can even become destructive when messing up when nobody is at home.

They do not like to run – if you want to take a dog in the morning jogging, do not accelerate too much. But slow running and walking Chow Chow like, they are very hardy. Chow Chow has a bright pronounced security and guard qualities, they are very territorial, and perfect for living in private house as a caretaker. They need early socialization, and meeting other dogs and strangers to learn behave harmoniously with them and take it calmly.

However, do not think that this will make your dog relaxed – if she sees aggression from a stranger, or he will penetrate your territory, the dog will certainly try it stop. The Chow Chow breed does not like to be squeezed, too much hug and touch, therefore, children need to be taught the right animal handling. In general, children treat these dogs well, if they know how to behave. It is worth mentioning that the Chow Chow breed is not suffers the use of physical force – it’s extremely hard to beat these dogs recommended.

If you raised your dog correctly, and stuck to those rules that were stated by us above, problems with training you should not arise. You just need to have enough patience, to overcome the pet’s internal stubbornness, while not lose your temper and maintain a sense of humor.

When working with this breed, you need to put yourself in the role leader, and this should not be done using brute force, which Chow Chow is unacceptable, but with the help of various tricks. For example, sometimes you don’t need to give the dog your favorite toy right away, don’t feed her as soon as she demands it. The dog must understand that its food, walks, toys are directly dependent on you.

The Chow Chow dog breed has a long, thick coat that needs to be combed out at least twice a week. In some In cases, a haircut is also required. They bathe an animal for about one or two once a week, claws are cut three times a month.

Always pay attention to the cleanliness of your ears and eyes – eyes cleanse from mucus after sleep every day, if necessary, and ears are usually brushed two to three times a week. Also follow the diet pet, controlling weight gain.

Chow Chow have good health, but, like almost any other dogs are prone to certain diseases, including which:

Interesting facts 1. Chow Chow is the only one the breed is a dog, except for sharpei, which has a blue tongue. 2. Chow Chow Sigmund Freud, nicknamed Yofi, was present at all his sessions therapy. Sigmund said that this helped him evaluate the mental the condition of their patients. 3. Famous Chow owners: Calvin Coolidge, Elvis Presley and Martha Stewart, whose Chow Chow is often featured in her morning TV show. 4. It was rumored that one emperor, in the Tang Dynasty, there were 5,000 Chow Chow dogs, and they had more than 2 times special staff who cared for them. 5. In 1865, Queen Victoria was presented with a chow-chow. 6. In the 7th century, the Emperor of China owned 2,500 Chow Chow dogs, which he used exclusively for hunting. 7. Has been discovered bas-relief depicting the Chow Chow dating back to the dynasty Han (150-200 BC), which definitely denotes this breed in as a hunting dog during this period in China.

Did you know? Chows are born with pink languages that turn blue with age. Ancient chinese believed that the blue language protects from evil spirits. 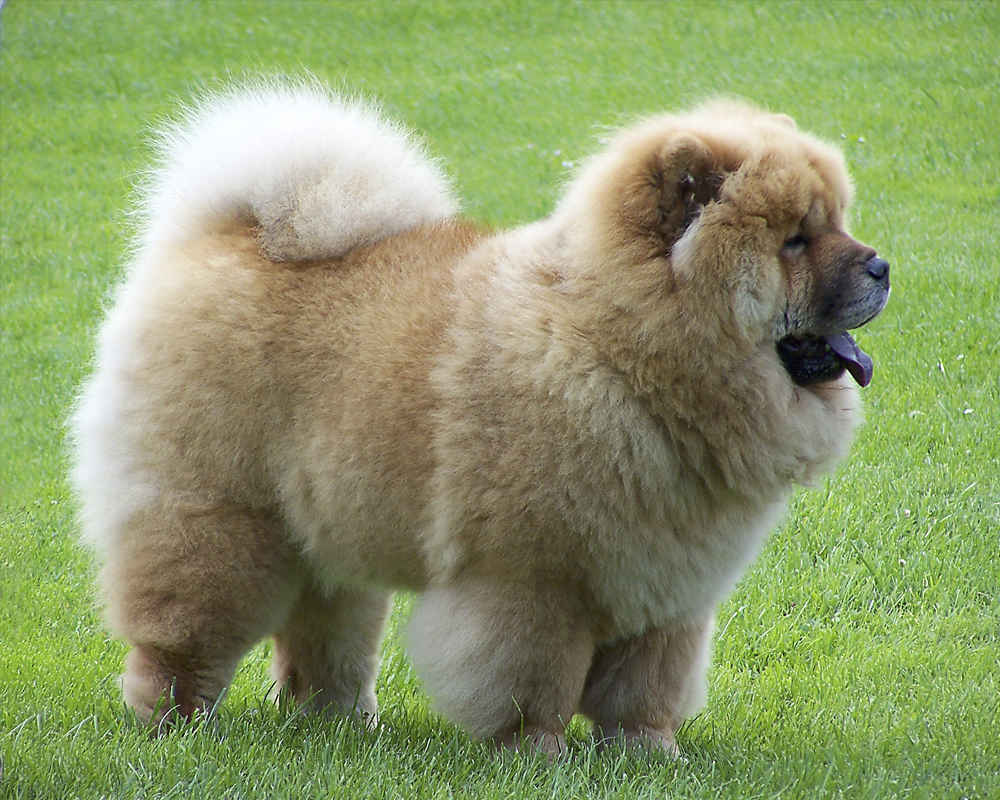 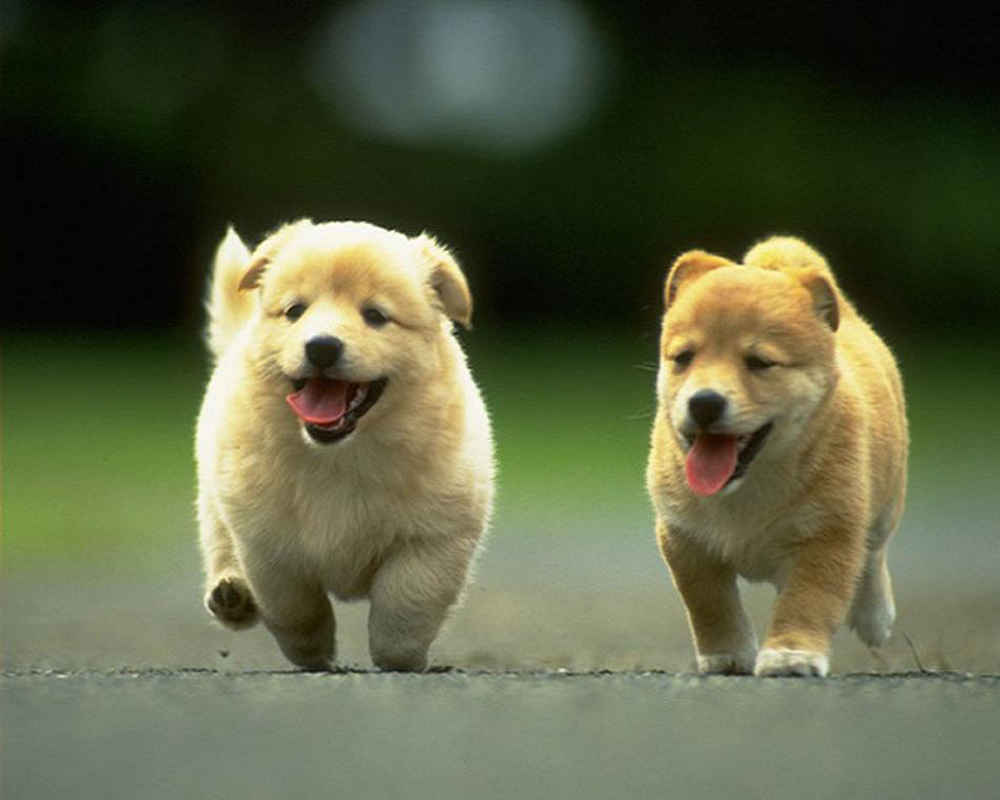 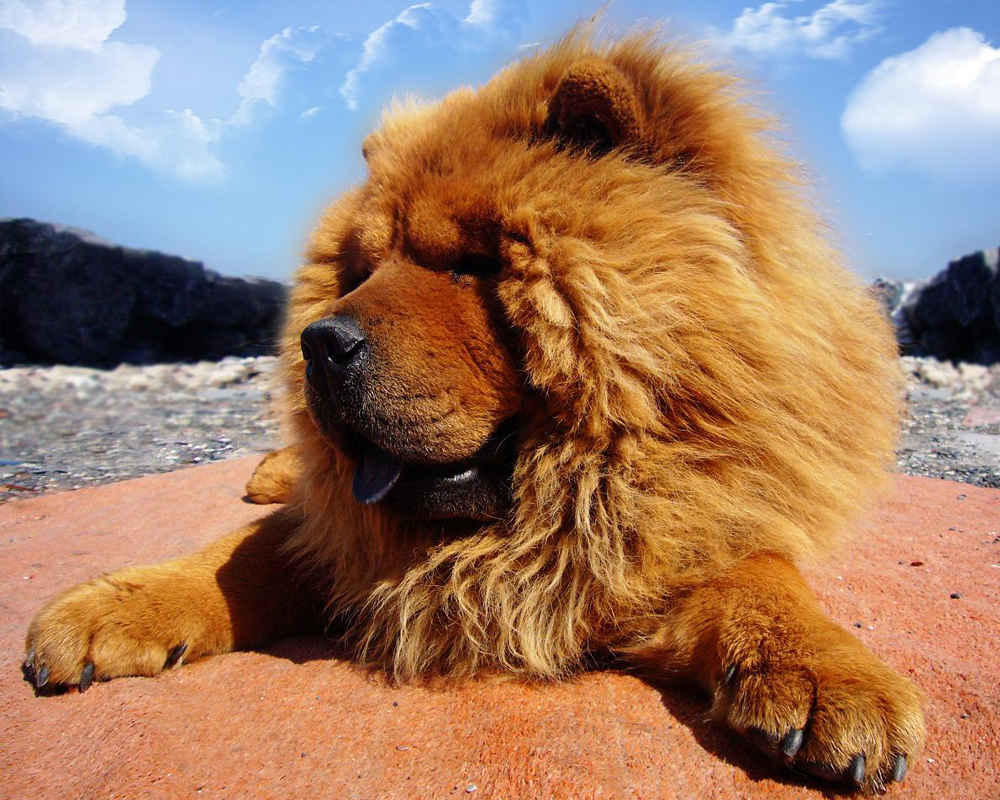 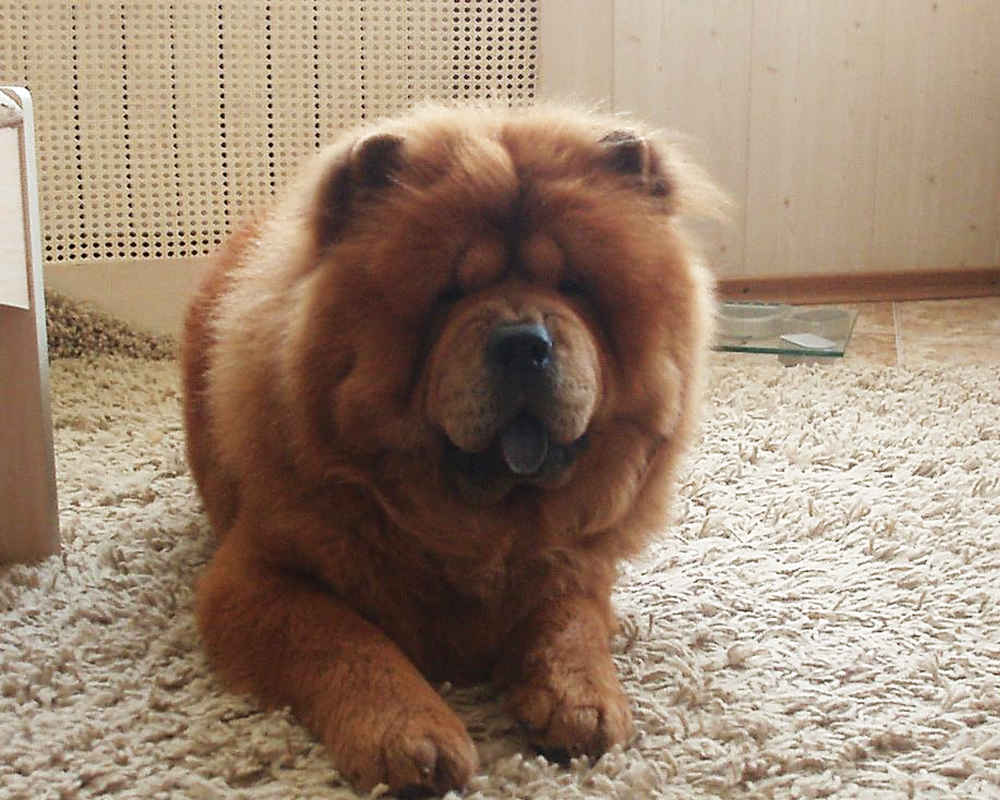 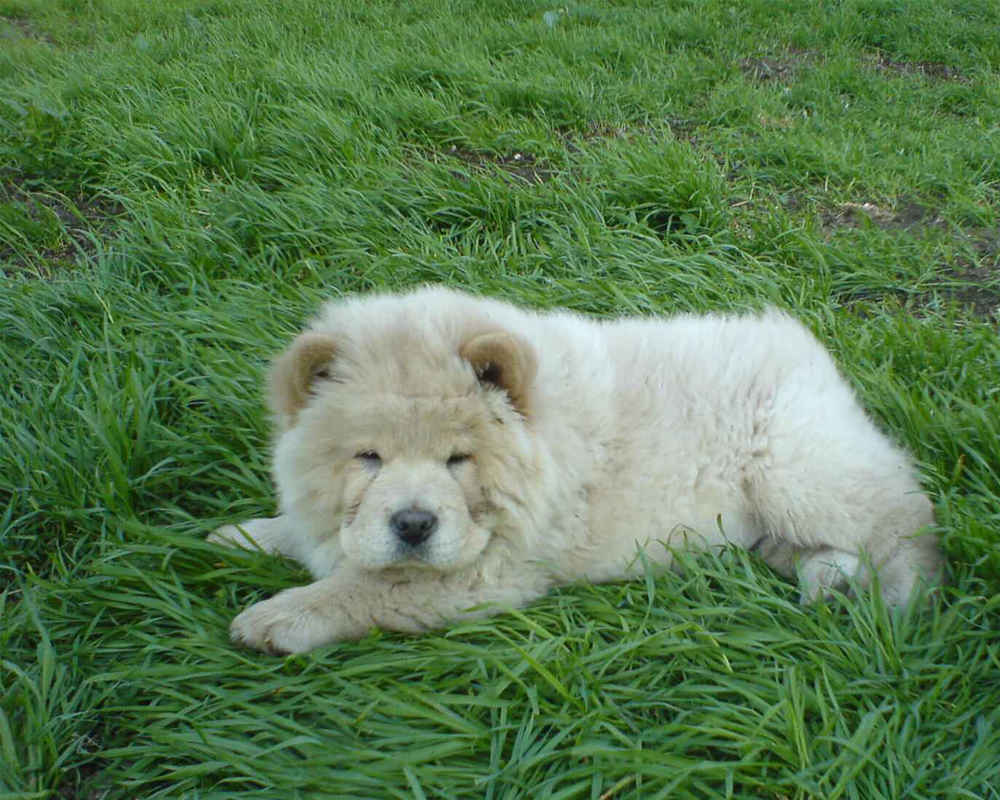 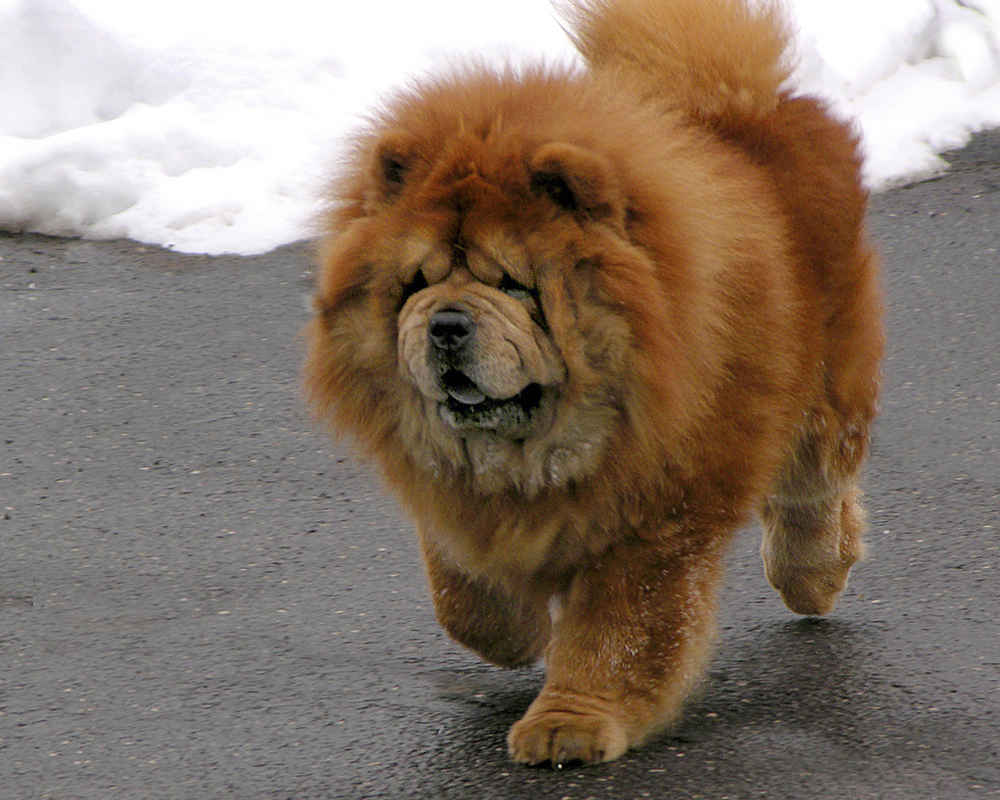