Anyone who has ever seen a Chinese crested dog is unlikely to will forget. And how can you forget this amazing animal, covered very short, but very soft silky hair, more like on the most delicate velvet? Pros of Chinese crested:

This animal, as if from a fairy tale! Hairless chinese crested must not be confused with any other breed. Her weight is only 5-6 kilograms, but the dog differs not in this, but in that wool (in our usual sense) is present only on legs, head and tail, the rest of the body is basically hairless. As many other dogs of miniature breeds, Chinese Crested is distinguished by charm and activity. This the dog will become a true friend for a loving owner. Chinese crested because of their physiological characteristics may to suffer from the cold. Therefore, the dog feels absolutely happy curled up in a warm room or in her arms his master. When cold weather is necessary to use special wardrobe for the dog. Warm clothes must reliably keep the animal warm! But cold is not the only danger. The sun can also damage the skin of the animal. To such no troubles happened, just apply the usual sunscreen on areas of the body where there is no hair. Chinese crested is of two types: naked and down (puff). Downy characterized by a relatively low level of molting, its, in principle, can be kept even for people prone to allergies. Such a dog will be need regular brushing of the hair due to the fact that the hair can be confused. Despite the fact that dogs of this breed are very small, charming and gentle, yet you must not forget what is this animal! Chinese crested requires the same attention, like any other dog. If you will be her everything allow, then in the end, the pet will be spoiled and will not be anyone obey. And vice versa, if you show excessive aggression, then the dog closes in itself and will only experience constant feeling of fear. To prevent this from happening, you must constantly deal with it. Children are very fond of dogs of this breed, and such feelings are mutual. In this case, troubles often arise during time for games with children. Because of the small size of the dog, often injured during the game, which means that the Chinese crested – not the best option for families where there are small children. One cannot but mention that the Chinese crested is one of those breeds that are most difficult to train, therefore, without help from a specialist you can not do. Dog training should pass professionally and consistently. The animal should not to experience the slightest discomfort, success will depend on this all training and education. The Chinese crested is tender, and, it’s fashionable to say today, a glamorous dog who doesn’t tolerates loneliness, which means she must live exclusively under one roof with the owner, who is obliged to give the animal a lot time. 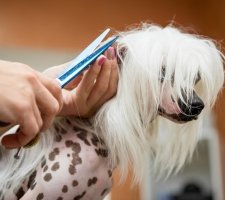 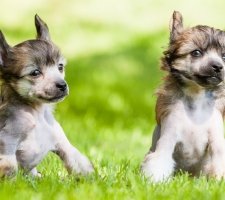 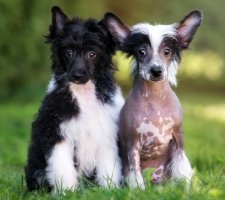 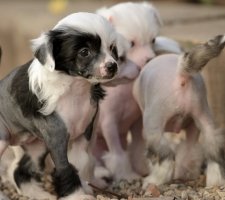 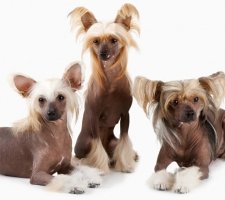 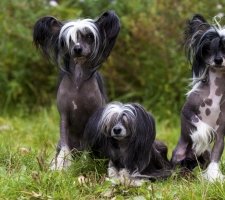 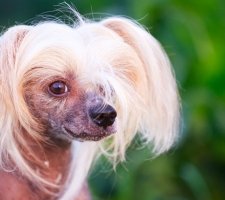 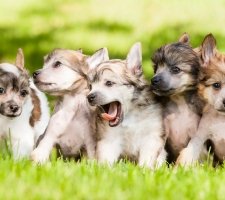 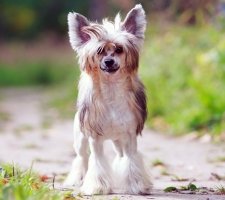 Although the name of the breed very clearly indicates its origin, there are quite a lot of theories about where the roots of a Chinese crested dog go back. All mainly because of the fact that naked dogs in ancient times met in different corners of the world, among other things, in the Americas, as well as in Of Asia. Some sources mention that in China, hairless dogs appeared already in 200 BC – 220 AD, during the reign Han Dynasty. The breeders then engaged in breeding, should have a high social status. First of all, Chinese crested animals were bred for medical purposes – as warmers, but, unfortunately, they were also fed and bred in as animals for slaughter. Thanks to the Chinese records researchers Chiao Tai and Min Tao, preserved quite detailed information on how naked dogs appeared. Based on the found records, we know that then two types of hairless were bred dogs:

Crested Chinese dog in the form in which we are accustomed to it see today, originated in the late 80s of the XIX century in America, in as a result of crossing a hairless Mexican and Peruvian dog with various dwarf representatives of long-haired breeds, according to most with a Maltese lapdog. Of course, they didn’t take root there immediately and even after many years they were rarely where it was possible meet. For the first time at a cynological exhibition, Chinese crested were presented on April 28, 1885. It was an exhibition in Westminster Cynological Club held at Madison Square Garden, which was attended by the only Chinese crested dog. The circumstances are favorable and this animal said journalist Ida Garrett, who was so fascinated this breed, that her interest in her grew into a passion, which subsequently caused breeding and her at exhibitions. When in the 20s of the XX century she met Deborah Wood, both girls immediately found a common language and from that moment started to breed together. Dancer and singer Gipsy Rosa Lee, a big fan of Chinese Crested Dog Breeds, contributed to the fact that the breed became more popular, and her a dog named Fu Manchu became the progenitor of many modern representatives of the breed. Initially in breeding participation of a dog without a documented pedigree, namely Deborah Wood began to keep books about her own breeding in the nursery “Cross Haven” and deduced the type of Chinese crested, which in its own way the appearance is very similar to modern representatives of the breed. IN 30s of the twentieth century, the first genealogy books begin on Based on which, twenty years later, registration began breed. In 1959, she founded the American Naked Dog Club, also developed the first breed standard and introduced the term “puff” (or “Powder puff”) for individuals covered with wool. After her death, in 1969, the secretary continued to maintain the family books American Club of Hairless Dogs. Only in 1979, when he was founded American Crested Club (American Chinese Crested Club), all breeding documentation for this breed was transferred to him. In 1965, it was decided to limit the right participate in exhibitions and recognize only those dog breeds that approved by a cynological organization issuing pedigrees that Approved by the American Kennel Club (AKC). Dog breeds Chinese crested were not assigned to this group and were deleted. They were able to take part in the exhibition only after two decades, February 1, 1986. For them, two playpen: one for hairless dogs, and an arch for longhair, also called powder puff. American Kennel Club approved The final breed standard was June 12, 1990. This standard combined both varieties of the breed into one (naked and covered with wool dogs). Thanks to this, from February 1, 1991 it became possible registration of this breed. In the 60s of the twentieth century, Chinese crested came from the United States to Great Britain, then to Germany and France The first dogs of this breed came to Russia in the 90s Twentieth century.

Chinese crested dogs are very welcome, cheerful animals. Often you can see how the dog seems to portray a smile. These small cheerful pets are very cheerful, they adore people and very attached to the owner. This feature of the animal has become the reason that they are often called “Velcro”, because they constantly follow their master and do not miss the opportunity hug your beloved master. Small Chinese crested by his climbing skills are very similar to cats. Owners of these pets argue that this cute creature never gets tired of playing and frolic with children, as well as with other animals. Small in size, complaisant character and desire to please the owner, make of Chinese Crested is a great dog for seniors a lot of free time. Dogs of this breed love to be in the center of attention, absorbing all the affection and tenderness of others.

Chinese Crested requires regular hair care. Bathe dogs of this breed quite often using special shampoo recommended by the groomer or veterinarian. Representatives Chinese Crested are prone to skin irritation, as well as other dermatological problems. Hairless dogs this breeds are more prone to dental problems than those in which has a hairline. Brushing your teeth several times in a week will help to avoid problems with teeth, as well as provide nice out of the dog’s mouth.

Like all miniature dogs, the Chinese crested dog has with a strong-willed character, he always wants to please to the owner. In the learning process, you need to use goodies, which will help stimulate the animal to perform certain teams. When training Chinese crested, you need to completely eliminate aggression that will only harm the animal and will not bring positive result.

Among the problems that often arise with the health of these miniature dogs, progressive atrophy is very common retina, which, ultimately, can even lead to complete blindness. This suggests that dog owners need to show your pet regularly to an ophthalmologist. Like most dogs small breeds, Chinese crested often suffer from dental problems. The main reason for this is the small size. the oral cavity. Often there are diseases such as deafness, diabetes mellitus and hypothyroidism (a condition in which the thyroid iron works unstably). Quite often manifest allergic reactions that cause itching, dry skin or even the appearance of blackheads. Regular skin care is an important point in general. care for Chinese crested, especially when it comes to hairless pet.