Under the shaggy coat of this dog hides a wayward fun persistent and congenital shepherd animal instincts. Old English Sheepdog or Bobtail loves people and It is a good watchman, although it does not apply to a guard dog. A dog needs attention to itself, especially in matters hair care. The first thing that catches your eye when meeting with bobtail dog – her amazing coat. Used to be these dogs groundlessly considered stupid. In fact, bobtail is independent and intelligent animal. From an ordinary shepherd dog old english shepherd turned into a beautiful a companion dog that can help farm and brighten loneliness to any person. It is very good-natured and active. dog. Many describe the Old English Shepherd as good, a loyal pet who loves people. In this case, sometimes a dog distinguished by his obstinacy. Consider the main points that need to know those who decided to become the owner bobtail. Old English Shepherd dog is quite loud voice, but it does not apply to guard breeds. Bobtail will become Great friend for kids. He becomes attached to people. For content such a dog you need to protect the yard with a high fence. Highly often shepherd dogs easily jump small hedges. Of paramount importance is the early socialization of the dog. it crucial in nurturing, prevent distrust and aggression towards outsiders. Some experts advise you to purchase old english shepherd puppies from breeders who grow puppies in your home. This is due to the fact that from birth the animal is among humans, and gets used to the corresponding atmosphere. After acquiring a puppy, it is best to pass it on training in a special class, but first consult with by the veterinarian. Training with a professional will guarantee the right and effective education and training. Need early training is primarily due to the fact that at this age puppies fully controllable and excellent in contact. During training you should reward the dog with praise and favorite treats. The most the main thing in animal training is patience and consistency. Quite often the Old English Shepherd compared with a yard dog. The reason for this is her active behavior. The shepherd instincts inherent in this breed are the cause of animal activity. That’s why it follows reliably protect the territory near the house. This does not mean that the pet must be kept outside. When the family is at home, the dog should be with you. Lack of attention to your pet can cause aggression and stress.A distinctive feature of any Old English Shepherd is her coat. It is also the most difficult part of dog care. Thick and long coat will require the owner a weekly combing, so be prepared to spend half an hour to an hour weekly. If you want your bobtail to take part in exhibitions, then wool requires daily care! Minus this breeds – possible wool on carpets and furniture, however, with sufficient care of such troubles can be avoided. 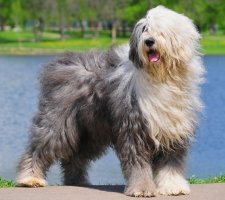 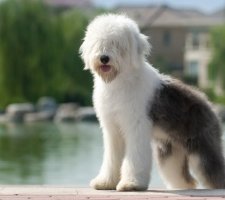 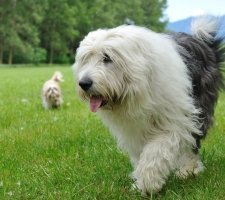 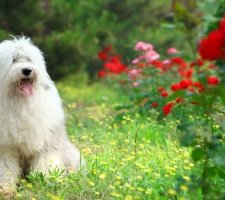 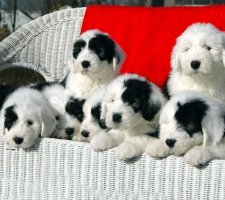 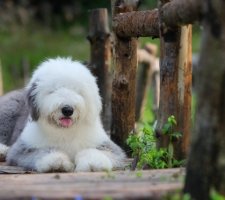 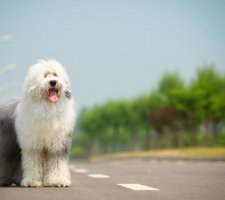 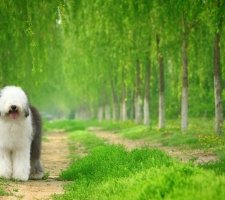 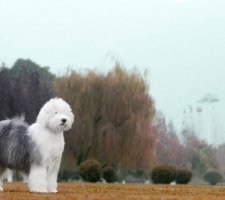 In England, a variety of breeds of cattle dogs were bred on for many centuries, but the Old English Shepherd is relatively young shepherd breed. Most likely, the breed was bred in central part of England. For the first time an image of a dog, extremely similar to the old English shepherd appeared in the artist’s painting Gainsborough 18th Century. Until 1885, such a breed was not officially existed. But this year, the famous English expert on Sheep dog breeding Freeman Lloyd presented this dog as a shepherd. Bobtail’s natural instincts have survived until today. days. American Dog Club registered Old English Sheepdog as an independent breed in 1888. The club of fans of this breed was organized in the USA in 1904. The popularity of the Old English Shepherd skyrocketed in the 1960s – 1970s with the release of films and television shows with involving a dog, such as Shaggy Dog. Today is Old English shepherd takes eighty first place among registered American Club of Breeds. Note that ten years ago the breed occupied sixty-sixth place.

Old English Shepherds are often found in Hollywood paintings, both in films and in cartoons. The nature of the dogs of this breed is so as diverse as the character of Hollywood stars. Some may be very sociable, while others are constrained, some are funny, and some are serious. A common feature is that all bobtails, related to cattle dogs, infinitely loyal to their to the owner. Great guard dogs are made from Old English Shepherds dogs, as they are quick and sound the alarm. Bobtail they love to play with children, they are patient and kind. These dogs will do for experienced dog breeders who lead an active lifestyle.

Bobtail or Old English Shepherd belongs to those breeds of dogs, hair care which causes a lot of trouble even for experienced dog breeders. To keep the coat healthy and well-groomed Bobtail owner will have to spend three to four hours every week. These dogs molt very much, therefore it is necessary comb hair thoroughly daily with a special brush. it will allow timely removal of dead hair and prevent the appearance of spools and tangling of hair. All Old English shepherds are prone to excessive salivation, which can lead to discoloration of the hair around the mouth. Therefore necessary several times wash your dog a day, especially after eating. Thorough wash requires the back of the dog. If you neglect it requirement, then in the wool scraps of dirt will form, remove which is not so simple. When it comes to swimming, many owners prefer to seek the services of a professional groomer. It is necessary to bathe the dog often, about several times a month or as it gets dirty, and they get dirty very quickly. summer hot months will be useful to cut the dog shortly. In addition to making hair care a little easier, it’s also protects the pet from overheating. It is necessary to regularly inspect bobtail ears for sulfur contamination, inflammatory processes and infections. They treat the ears with a special solution prescribed by the veterinarian. Ears can be cleaned with a cotton swab, but in no case do not use a cotton ear swab with direct ear canal cleaning; weekly cleaning is mandatory teeth that will prevent tooth problems and provide fresh breath to the dog. Do not forget about the monthly clipping claws.

Bobtail, by virtue of their shepherd nature, are quite independent. IN In terms of training, these dogs are not a “gift”. Any teams they perform as long as they like it. Should train a dog a person who knows how to maintain leadership qualities in a relationship with a dog. It is very important not to give the pet concessions. If bobtail if he feels what’s going on about him, then he will simply to manipulate this. Therefore, during training and training Be persistent and self-confident.

The average lifespan of bobtail is about 10-12 years old. Major health problems include bloating (expansion of the stomach and inversion), cataract, dysplasia, ataxia, cerebellar abiotrophy, congenital deafness, dilated cardiomyopathy, epilepsy, autoimmune hemolytic anemia and thrombocytopenia, congenital elbow dislocation, keratoacanthoma, cancer nasopharynx, progressive retinal atrophy, cryptorchidism and hip dysplasia. In addition, many bobtail side effects appear on some drugs, for example, on ivermectin, which can cause chills, ataxia, coma or even death.