It is believed that the basset hound originated in the seventh century in the monastery of St. Hubert, located in the Ardennes forest. By legend, the monk Hubert, who is now considered the patron saint hunters, spent a lot of time breeding a new breed of dogs. Later it became known as the Bloodhound and was especially appreciated in France. and England. One of the variety of bloodhound was short-legged, slow-moving dogs that hunters have chosen. These dogs coped with duties perfectly during hunting for small game, rabbits and hares. It was from these dogs that he came about, rather total basset hound.

Basset Hound has long been very popular. Its often can be found in various commercials, as well as in homes and on the lawns of many families who wish to have a good and dedicated four-legged friend. Noble appearance and faithful character make this dog a great pet for almost any family. representatives of this breed are very developed sense of smell. Is not strange, because the dog was bred for hunting. In this regard, the basset can only compete with bloodhound dogs. The rest, unlikely to be able to compete with them. Since the basset hounds originally bred as hunting dogs, they survived appropriate natural instinct, so they always strive pursue potential prey. Features of the skin, and also long ears hanging down to the ground give a basset a great opportunity to smell prey and, accordingly, catch up with it. It is precisely for these qualities that bassets are appreciated by hunters. Due to the fact that the basset paws are short, they are not able to move so fast, like other large dogs. But for a hunter it’s very good peculiarity, because the animal can imperceptibly creep up to prey. Another dog feature that is quite comfortable the owner-hunter is a long tail with a white tip. is he allows you to see the dog even when it is in high The dogs of this breed have a loud voice, therefore their special distinct and piercing barking, it applies to long distances. While at home, the basset will not show much activity, he is lazy in this regard. The pet is devoted to his family, very pleasant in communication and friendly. Bassets do not like to be long time alone. If a pet is left alone for a long time, then he will certainly whine, and even howl. Basset hounds are lovers of food, but do not show at home special desire for active pursuits. It becomes the reason obesity, which in turn leads to problems with musculoskeletal system. Bassettes are very hardy. You can calmly go with them on long walks, especially since positively affects the health of the dog and prevents an increase weight. When strolling with your pet, do not forget that the basset is hunting dog, so he likes to hunt down. Do not walk without a leash, otherwise risk your pet chasing a potential trophy. Basset Hound is the owner of a one of a kind vote. We can say that these dogs do not bark, but howl. Also they are able to mumble in a peculiar way, thus attracting attention, or begging for food. Thanks to this peculiar behavior, they manage to beg from the host table many goodies that are not very good for the dog. Not worth it go on about the pet. Moreover, many products from the table the host can cause serious harm to the animal. Bassettes, like usually calm and balanced, they get along well with children, and also with pets. The main disadvantage of this breed is tendency to drool and howl during loneliness or anxiety. If you are ready to endure such oddities, then the basset will become unbeatable pet and just great companion dog.

The name of the breed comes from the French word “bass”, which means low. It is because of the low growth that appeared title. Small growth is caused by a feature of the physiology of the animal: he has a rather heavy skeleton and muscular body. Average weight a dog is about 23 – 30 kilograms. But the growth is like as a rule, it is about 33 – 38 centimeters. Bassettes – large dogs on low legs. The short stature of the dog is the result of dwarfism, which doctors call achondroplasia. But this is not a disease that should be tried to cure. These sizes have become the breed standard and markedly distinguish these dogs. from other relatives. The Basset Hounds have a smooth, short coat for which is relatively easy to care for. Most bassets have tricolor color, consisting of spots of black, brown and white colors. This coloring is considered classic. True, there are basset hoots with red spots on a white background, as well as white spots on a red background, and a completely red color with white or lemon color paws. Sometimes there are also gray basset hounds. This color is not desirable, as most often the cause of non-standard color is a genetic disease. Do not follow up on a dog breeder who will offer you, allegedly, a puppy with a unique color. Basset has a rounded skull, and a large amount of skin on front of the head. Such a somewhat loose skin makes the look basset sad, which, according to many, adds to the animal special charm. 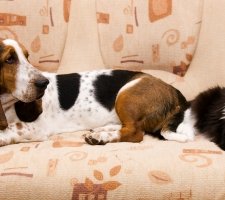 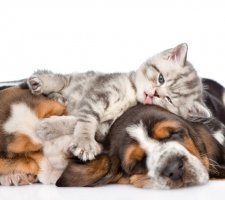 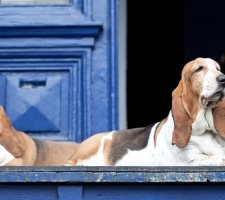 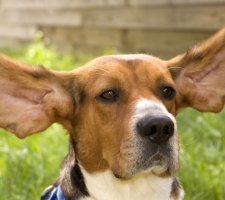 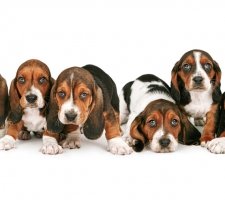 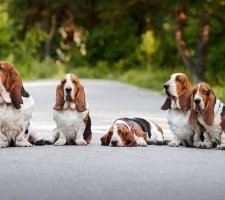 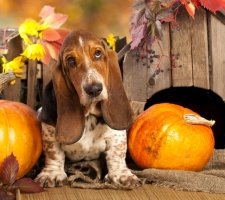 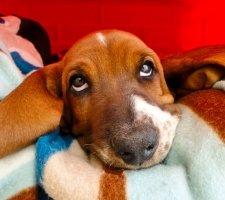 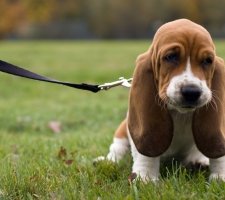 The legends say that the bassets come from Constantinople, where came to Europe during the Crusades. Is it true or not – nobody knows. The British believe that basset is a very an old breed that was already known in England since the 16th century. Proof of this, they consider Shakespeare’s description of a summer night: “My hounds dogs, painted in the color of sand, have powerful underpants. And sweep early dew with downcast heads. Their knees are bent and the bellies are saggy. Slowly they follow the trail, but their joint barking sounds like a jingle. “Although this description is suitable for basset, some dog handlers claim that the described symptoms may also match south hound. Of course, this dilemma is unsolvable, because in fact no one can know about whom he wrote Shakespeare. In fact, the Basset Hound did not come from England at all, but from France, although they brought the breed and gave it a name, translating from French, namely the British. These are really popular dogs became thanks to the Americans. Basset Hound is considered a descendant two French breeds: the already defunct basset d’Artois and artesian-norman basset. In 1874, the British breeders exported a group of these dogs from France to their possessions. As a result of mating, a transitional rock was obtained, which later crossed with bloodhound. It was the first artificial fertilization, given the large difference in growth. From bloodhound basset adopted its main features: excellent sense of smell, a prominent skull box hanging loose and wrinkled skin. Since that time it was forbidden take out the dogs, and the breeding of the basset hound in England developed independently. In 1880, the Basset Hound was the first demonstrated at an exhibition in Wolverhampton, and in 1883 was The first Basset Hound Fan Club was created. Big fan of this breed was the wife of King Edward VII, Alexander, a dog which also participated in exhibitions. One of them even received an award at a prestigious exhibition in 1909. In Europe, before the late 60s of the twentieth century, the breed remained heterogeneous. It even happened that dogs from the same brood could have completely different anatomical signs: the height at the withers fluctuated within 23-30 cm, and sometimes even reached 36 cm. This was not the only difference is because the dogs were different in their way appearance. The first breed sample was introduced only in 1955 year. This was a significant turning point for the development of the breed. The main features of the breed were approved, which gave direction to the work of breeders who, after many years of work, were able to bring out such a basset hound that we know today, that is a dog with an elongated body, powerful bone and short, strong paws. Compared to its ancestors, the modern basset has much more skin, as well as significantly more weight. surprisingly, this originally French breed returned to France only by 1955 and to this day remains enough a few. In this country, bassets have, for the most part, lovers, fans of the breed, which of course does not contribute to development populations. In England, bassets are very popular, however, in the States they are breaking all records of popularity. In France annually about 800-1000 units of offspring are recorded, in England – 2500-3000 individuals, but in the United States more than 20,000 individuals!

A languid look, long ears and short stature sometimes cause many people feel pity for bassets as they look sadly. In fact, these are very funny dogs, with a calm character. They get along well with children and pets. Everything these qualities make Basset Hound a good companion dog. It’s especially fun to watch a basset playing with children – it’s a real sight! You can be sure that your pet will start bark when he sees an approaching stranger, but as soon as he will understand that this is your friend, then he will become his fun to greet.

Basset Hound is a dog with short, waterproof coat, for which is very easy to care for. Weekly combing will allow keep constantly shedding wool under control. So how are u basset hounds are long and drooping ears, this becomes frequent the cause of various ear diseases. Weekly ear treatment will prevent all this. Regular wiping requires creases on the muzzle of the basset.

Basset hound training can be a serious problem, especially for an untrained dog breeder. Some believe that the reason this is the low intelligence of the dog, but it is not. All the fault – the independent nature of the basset because of which these dogs often do not very susceptible to learning. In addition, dogs of this breed there is no desire to please a person, which is also one of reasons that complicates the training process. Basset Hound, very susceptible to various odors. If a pet is teaching some kind of interesting aroma for him, then he will definitely try follow him. In such situations, classes cannot even be discussed. speech. Dogs of this breed are best kept on a fenced territory.

The average life of a basset hound is 12 to 15 years. Major health problems include: allergies, back and joint problems, bloating, cardiac diseases, skin diseases, diseases of the ears, eyelids and eyelashes, glaucoma, intervertebral disc disease, von Willebrand disease. Note that the basset is considered to be a healthy dog, but if for animals are poorly looked after, then the disease will not take long to wait. Especially carefully you need to monitor your ears. If this is not do, then otitis media will occur. Eyes also require care. Them daily need to be wiped to remove dirt and dust that may accumulate under the skin near the eyes and cause infectious diseases.