American Pit Bull Terrier, abbreviated Pit Bull (Pitbull) – medium-sized American dog that belongs to one of varieties of pit bulls. This breed is often compared with the American Staffordshire Terrier and Staffordshire Bull Terrier. Height the pit bull is between 45 and 60 centimeters, and the weight can vary from 15 to 30 kilograms. Dogs of this breed They are muscular and have a physique. For its size pit bull very strong. The wedge-shaped head is large enough, but not massive and is completely symmetrical to the rest of the body. On the forehead of the dog there are small folds. The hair of these dogs is short. what Regarding the color, then it can be any. Pit Bulls Are Solid and several colors. As well as color, different may be eye color, but there are no blue-eyed pit bulls. Short the tail of the dog has a conical shape. American Pit Bull Terrier applies to companion dogs and family dogs. Initially this breed was bred as a kind of “bait” for the bulls. Later these dogs began to be withdrawn to participate in battles, well, and even later pit bull terriers have become family dogs. By the way, these dogs, in spite of their character, they get along well with children. their courage and activity make them excellent athletes, as well as unsurpassed pets who successfully cope with dexterity and obedience assignments. American pit bull terrier belong to the so-called “bully dogs.” It is worth noting that “pit bull” is not a breed, but simply a designation to describe american pit bull terrier, bull terrier, american Staffordshire Terrier and Staffordshire Bull Terrier. Wherein some people tend to think that all of these species are absolutely identical dogs. Actually this is not true. Herself the confusion began in 1930 when the American Club dog breeding recognized american staffordshire terrier a separate breed, but there is no American pit bull terrier. Today There was a stereotype that the pit bull terrier is a dangerous dog. The fault was the fact that the animals were bred specifically for participation in dog fights, so they have developed an appropriate character. We will not, of course, hide that in recent years there have been there are many cases of manifestation of aggression by pit bulls. In fact, circumstances are such that most cases aggression dogs of this breed are single. Similar situations widely covered in the media, but these cases, as already noted, are isolated. Thus, the stereotype of a dangerous dog has developed due to negligent people’s attitudes towards information regarding cases of aggression. Each the owner of the pit bull must know that he may face mistrust and even anger of people towards you as the owner “dangerous” dogs. The whole blame is misinformation. This breed is not for everyone, especially not for those who are not ready to spend their time on decent education or cannot ensure consistent clear training. With sufficient socialization and qualified excellent companion dogs come out of pit bull terriers who get along well with children. They like to be with people and gentle with them. Often dogs of this breed love to meet and wait his master at the door. American pit bulls loyal and faithful my family. If necessary, they will always come to the aid of their to the owner and family members. Pit bull puppies are very smart. They are easy can be trained and with pleasure carry out various teams. Pit bulls love to participate in all family events. Even in adulthood, pit bulls can act like puppies, but this behavior manifests itself only in the home environment. Having bought this puppy breed, you will wonder how before you could live without a pit bull. 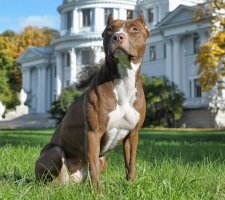 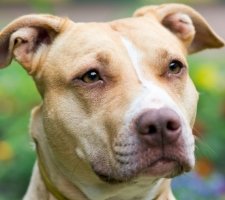 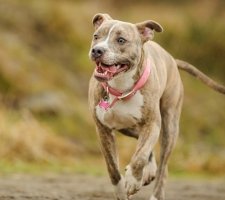 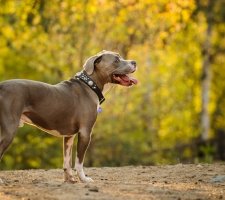 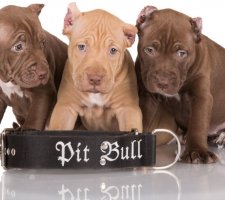 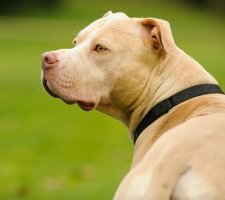 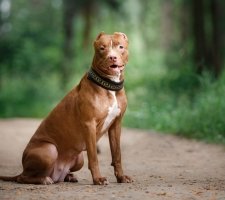 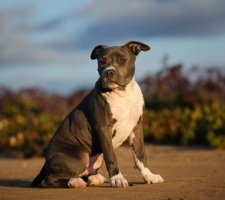 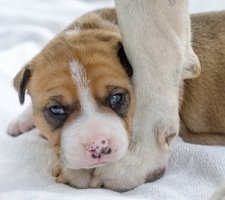 Pit bulls were bred at the beginning of the 19th century in England to participate in popular then bullied by a bull and a bear. But these sports in 1835 year were recognized inhumane and cruel and were banned. On their place came dog fighting. Therefore, in dogs on purpose aggression was cultivated, which subsequently survived on genetic level. But these dogs have another genetic feature – unwillingness to bite people. Later breeders started work on the behavior of the dog in the ring and in the family different. As a result, the breed began to gain popularity and began to join families, showing their best qualities. When pit bull hit the American continent, it became especially popular on the farms. The animals did an excellent job hunting game, they guarded property and were simply unsurpassed companions. In America, breeders began work on increasing the size of the dogs of this breed. As a result, the pit bull in the United States has become much larger than his counterparts in England. In 1898, the British Club dog breeders (analogue of the American Club) named this breed American pit bull terrier. And here is the American Kennel Club recognized the breed in the early 1930s, but under a new name. Intending to separate the breed from its ancestors – fighting dogs, the club decided to call the breed an American Staffordshire Terrier. Ever then the American Staffordshire Terrier began to officially appear at various shows while dog breeds are American pit bull terrier meet at formal events was impossible.

Pit bulls are very common aggression. Fighting character still present in many representatives of this breed. Aggression can manifest even when the dog is raised from childhood with cats or other dogs. Such a nasty character speaks of that when walking with a pet you need to show maximum attention and do not leave the animal unattended. If you notice what other dogs pay attention to your pet or on the contrary, it must immediately be removed from the site. Of course pit bull must always be on a secure leash, and the yard in which the pet will live, and spend time there, it is necessary to reliably On the pit bull terriers from the very birth lies the stigma fighting dog. The news and newspaper reports about aggression of some representatives of this breed. In many western countries are full of shelters with pit bulls, and in some even banned their removal. The name of the breed itself instills in some people fear. Such fears are in most cases unfounded. Pit bulls are very educated if they live in a loving family. They are true and reliable, these are great companion dogs. They love to be close to people and want to be among their family, take part in her life. Any events, whether it’s a walk through the woods, departure to a picnic or just gatherings in the yard, it is necessary to carry out together with pet. If the pit bull will feel loved and cared for about him, he will answer the same.

It’s easy to take care of a pit bull. They just need to bathe comb as necessary, as well as from time to wipe with a damp cloth. It will be quite enough to keep the coat healthy and beautiful condition. The ears of the American pit bull terrier require regular monitoring for signs of contamination, irritation and infections. They clean the ears with a special swab and a tool, designated veterinarian. You should never use a cotton swab to clean the ear canal. Also needed weekly brush your teeth pit bull. This will prevent the formation of tartar, strengthens the gums and prevents odors from the oral cavity. Claws are cut once a month, unless, of course, a dog Itself does not grind them.

The process of training the American pit bull terrier must begin in early age. Pit bull training should take place in a calm, non-assertive manner. Training should not be very long classes, but the gaps between them should also be short. IN Otherwise, the pet will get tired of everything quickly, even if You will offer goodies. During the training of dogs this breeds need to be patient, as the process can drag out. Even well-trained pit bull terriers may eventually behave spoiledly, thus checking what they can and what – not. In such situations it is necessary to behave calmly, but give the dog must understand that this cannot be done. If there are children in the family, then the puppy should start communication with them from the first day of appearing in the house. It is noteworthy that, despite the fact that pit bulls are usually get along well with children in the family, may be distrustful and even aggression towards other people’s children. That is why during the period of socialization American pit bull terrier needs to teach your dog to understand that all children need to be treated well.