Alaskan Malamute has a powerful body and a strong, hardy the body. The breed is considered one of the oldest, and its appearance not much has changed since its inception. The dog is very smart, but for her training needs to be made enough effort and perseverance. If you first see Alaskan Malamute, you will be amazed at its size. Outwardly, the dog looks like a wolf, therefore, many believe that dogs of this breed come precisely from wolves. Malamutes often play the role of wolves in various films. Despite the wild appearance, Alaskan Malamute is good pet. These amazing dogs possess incredible strength, energy, stamina, and intelligence. Believe that the breed was originally bred to haul heavy sleds with cargo over long distances, as well as to assist in hunting for seals and polar bear. Today the dog is, first turn friend. Animals of this breed have achieved considerable success in various contests and competitions. Alaskan Malamute is very movable. He will play, engage with you with pleasure sports, run in the park or swim in the sea. Pet also with pleasure will be sitting with his master at the TV, but all active games are much more interesting for malamute. Content of this dogs are not easy. Therefore, this breed is not suitable for untrained dog breeder. For the normal development of Alaskan malamute needs a large space in which the dog will Feel comfortable and confident. Independent character of an animal becomes the reason that novice dog breeders the impression is that the dog is stupid. It’s not really so, just malamute is very independent, therefore, in raising the breed an individual approach is needed. If you really want to have such a dog, ready to give her their attention and love, as well show patience and perseverance in education then Alaskan Malamute will become your true loyal friend. 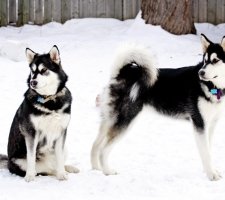 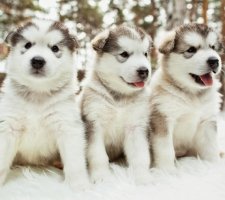 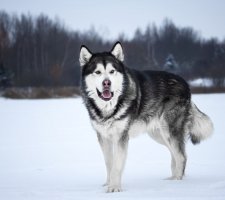 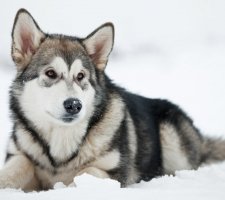 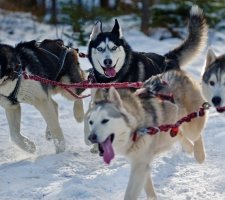 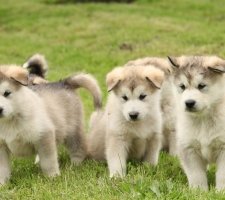 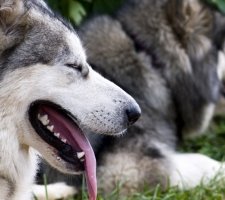 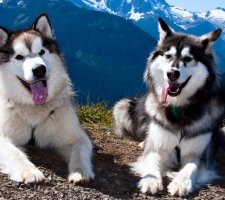 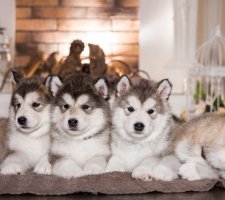 Alaskan Malamute is one of the oldest arctic sled dogs. Thousands of years ago, the breed crossed the ocean and came from Siberia to Alaska It is believed that the breed was bred by the ancient northern the Malamute tribe, which used dogs for movement, and also for hunting seals and polar bears. Also animals helped to move heavy loads on a sleigh. This dog is popular was among the Eskimos. Active elimination of malamutes began in period of the gold rush, when it was necessary hardy, strong dogs capable of living in harsh northern conditions. True in those days began the crossing of Alaskan Malamute with local dogs, so the breed almost disappeared. Thanks tribe “Malamute” breed is preserved. Already at the beginning of the twentieth century the breed began to actively develop. First of all, it was connected with need for hardy dogs that could help scientists during arctic expeditions. It is worth noting that in the 1900s, a slightly new variety of this a breed that was slightly different in appearance. These dogs actively used during the First World War. During the Second World War II Most Alaskan Malamutes went to front to help fight the enemy. This was due to acute lack of sled dogs. Unfortunately, many dogs from the war never returned.Alaskan Malamute Fans Club was the first time organized in the United States in 1935. In the same year, the breed was officially recognized by the American Kennel Club. Today Alaskan Malamute takes 55th place among all breeds, registered by the American Kennel Club.

The nature of Alaskan Malamute

Alaskan Malamutes are hardy working dogs. Despite, that the Malamutes are called to carry sledges, to take part in search operations, yet these dogs are cheerful and full of energy. They are have a playful and friendly character. Easy to contact even with strangers. Such a dog is a great family dog. pet.

Alaskan Malamutes molt abundantly, so they require combing regularly, two to three times a week. So much will be sufficient for grooming. Especially active molt occurs twice a year. During these periods, more thorough Care with a good brush. In addition to combing, you have to trim claws, care for the teeth and ears of the pet. Concerning purity of wool, then here it should be noted that malamutes, in this similar to cats: they try to keep their hair cleanliness. Such dogs are only bathed several times in year, with the exception of cases of severe contamination of the coat during bad weather.

The industriousness of the Malamutes is laid at the genetic level. Despite it’s difficult to train and train, but in at home it becomes for most dog breeders in general an impossible task. For training and training dogs of this breed you need a real specialist with perseverance and knowledge of the characteristics of the breed. Alaskan Malamutes are the best dogs for racing, as well as reliable helpers during the northern expeditions. For example, Admiral Bird used these dogs on their expedition to the north pole. Often dogs of this breeds are involved in search and rescue operations, especially when it comes to saving people caught in an avalanche.

The average life expectancy of Alaskan Malamute is approximately 12-15 years. To the most common diseases these dogs include: autoimmune hemolytic anemia, bloating abdomen, cancer, chondrodysplasia (dwarfism), diabetes mellitus, epilepsy, eye diseases (degeneration and degeneration of the cornea, glaucoma, cataract, generalized progressive atrophy retina), hip dysplasia, hypothyroidism, skin diseases (generalized demodicosis, follicular dysplasia). Malamutes often have genetic pathologies that lead to malabsorption of zinc, which, in turn, provokes various lesions of the skin (even in the case of if the level of zinc in food is normal).