Central Asian Shepherd Dog, or, as it is also called, Alabai is An ancient breed of dogs that arose more than four thousand years ago. Many believe that the breed appeared on the territory of modern Of Russia. Alabai have many good qualities, including excellent characteristics of the guard and fighting dogs. Known that in many countries dogs of this breed were actively involved in dog fights. Before the Central Asian Shepherd began to take on service in the Russian army, the breed was almost on the verge disappearances. Alabai was also popular among farmers. They did an excellent job of protecting livestock. Thanks to diversity, the nature of the dog differs from dog to dog, also there is still no single breed standard. Representatives of this breed have some very interesting anatomical characteristics: false ribs, flexible joints. The Central Asian Shepherd is big a breed of dogs that was first recognized in Soviet Russia by state level. Today this breed is getting more popular in many countries of the world. Central Asian Shepherd Dogs are smart, calm, have immense courage and fearlessness. Alabai belong to dogs with a strong instinct guard dogs. With good socialization, pets of this breed become invaluable helpers and true friends. shepherds are persistent, so it’s hard to convince such a dog does not do these or other things. To strangers, the pets of this breeds are wary, but other animals can be alabai show even aggression. Representatives of this breed, despite their size and difficult character, are gentle and gentle attitude to family members, especially to children. However never It is worth leaving children with Alabai alone. Shepherd is necessary Familiarize yourself with your environment from an early age. It should be understand that alabay is not suitable for beginner dog breeders. Central Asian Shepherd Dog is a reliable dog that has strong enough. She is distinguished by her independence, curiosity, attentiveness and unwaveringness. The length is a little weak more than his height. It has a short or medium length coat with thick undercoat. As a rule, the ears of the Central Asian Shepherd short cut, tail also stop to medium length (the exception is countries where dog operations are prohibited on state level). The most common color is black and white, fawn (different shades), brindle. Head of this dogs are large enough, without clearly defined borders of the skull. At some representatives of this breed have a black mask. Neck Central Asian Shepherd Dog short, body wide, proportional, with strong muscles. The dog’s chest appears somewhat elongated due to the development of the so-called false ribs. Legs are straight, heavy skeleton, but moderately developed knee joints. Typical manner of movement for the Central Asian shepherd – gallop and lynx. 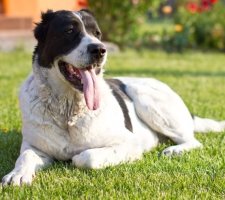 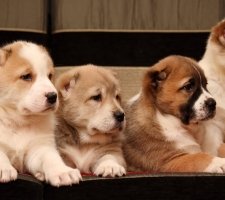 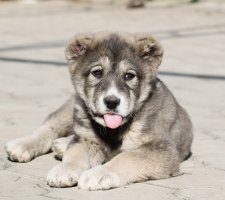 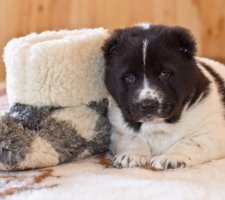 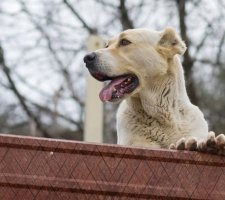 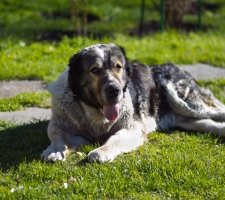 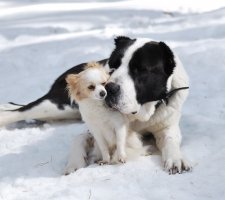 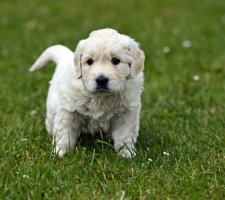 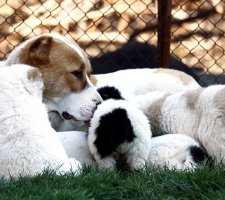 Most likely, the Central Asian Shepherd Dog (Alabai) appeared in the area located between the northwestern border of China, the Caspian Sea and Asia Minor. Still attempts to standardize alabai occurred only in Russia, as well as in other regions that at one time were controlled by Russia. Local wild dogs, populating Central Asia, in principle, were widely known since the 18th century. After the communist revolution of 1917 the Soviet government made efforts to develop the ideal working dogs, which would be a great helper for the Red Army. IN At that time, an extensive breeding program was launched, in which both dogs, previously bred in Russia, and animals brought from abroad. It was subsequently bred Central Asian Shepherd dog in the form in which it is familiar to us now. Of course, in the process of selection, the breed has changed. On throughout the history of the alabai were very much appreciated for their excellent fighting abilities and stamina. In some areas this dog even began to call “wolfhound.” To date, the Central Asian the shepherd is the most popular in Russia. She recognized by most dog clubs except British Kennel Club.

Central Asian Shepherd Dog – A faithful dog that will always protect his master. She has very strong security instincts, which sometimes leads to dominant behavior. Dogs of this breed are very attached to their environment, imbued with love for children. At the same time in a circle of strangers Alabai will be careful and incredulous. Needs a competent and experienced trainer. The fact is that Central Asian Shepherd Dogs are independent, they easily cope with the solution of difficult tasks, are distinguished by courage and by force. This is not a dog in whose territory you can without labor stop by. The animal is very territorial, therefore uninvited Guests are advised not to encroach on the space of the dog. One of hallmarks of Alabai is loyalty as well responsiveness, obedience to the owner. But to these dogs need an experienced, confident trainer who will enjoy authority in the eyes of the animal. If the owner will show self-doubt, then the dog may become uncontrollable.

The coat of the Central Asian Shepherd Dog has a short or medium length with thick undercoat. Alabai slightly shed almost round year, but to a greater extent the main molting period occurs two once a year: in spring and autumn. During active molting, the dog it is necessary to comb several times a week, and in other cases one combing per week will be enough. Also alabai it is necessary to bathe periodically. Like all other dog breeds, Alabai needs standard care: regular brushing, ears, clipping claws.

The Central Asian Shepherd Dog is designed for an experienced dog breeder. What already it was noted alabai easy-to-learn but independent character of the dog It requires perseverance from the trainer. The breed was bred specifically to become a reliable assistant human, but this does not mean that the animal will be subject to the owner. Therefore, training and training is a key moment in education alabai. Quite often, Central Asian Shepherd Dogs are in no hurry to perform teams, preferring to do it only when it wants to them. In relation to new people, Alabay can be not only suspicious, but also to show hostility. Socialization must solve all these problems.

The average life span of the Central Asian Shepherd is from 8 to 10 years. This is below the average of dogs of other breeds, whose average life expectancy is about 12 years. Although this duration, in principle, roughly corresponds to life expectancy of dogs with a similar physique and size body.This breed is one of those represented today. large gene pool. As a rule, these dogs are least affected. from various diseases, but they also have certain Problems. Most often they are associated with diseases musculoskeletal system.