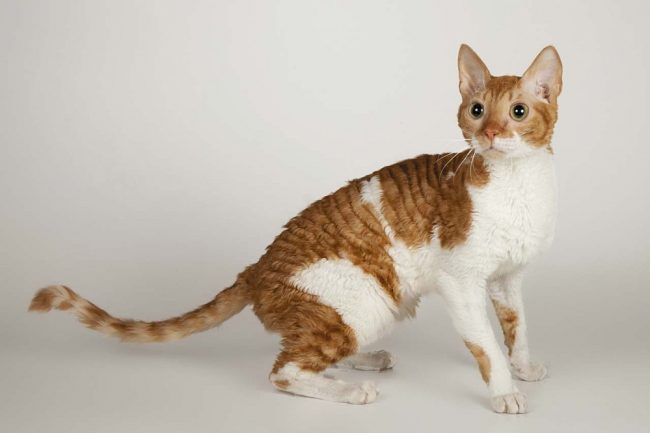 Class: The breed standard was adopted by WCF, but according to FIFe system is still considered unrecognized

Color: there are individuals of black, blue, tortoiseshell, red and white colors, colors are also popular harlequin, bicolor and tabby

Life expectancy: up to 14 years in good conditions

The Ural Rex, whose photo is posted below, will not leave anyone indifferent.

Kittens of this breed have irrepressible energy.

They are almost impossible to find in a calm state beyond except sleep time.

Adult Urals have a complaisant character.

Such animals are not afraid to be left alone with small children.

Rex will be patient with the fact that the child is constantly will pick him up or squeeze.

Another cat will be a great companion for single people. 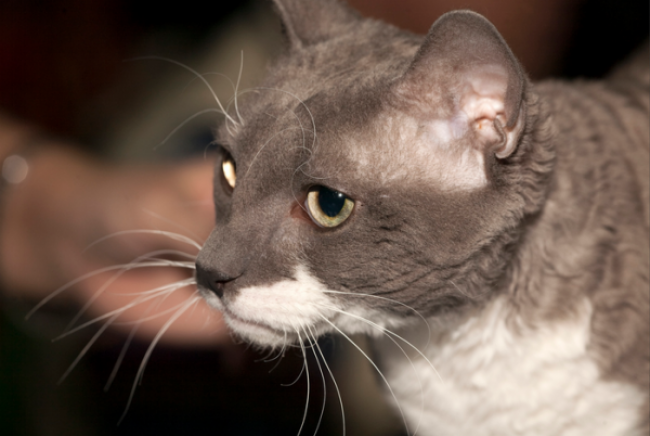 This breed was formed naturally, but with the help of people interested in spreading it, gradually closer to factory standards

For the first time, cats were talked about with curly hair in Russia back in pre-war time.

They appeared in the Urals, but later on in the country they didn’t have spread.

After the start of the Second World War, the population of unusual animals is still continued its existence.

In peacetime, there was no mention of such cats.

They started talking about them again in the 1960s. Then it was a long time lull

However, with the onset of 1988, the situation changed: in the city Zarechny, owned by the Sverdlovsk region, is born curly kitten.

He is given the name Vasily. The specified year is considered an official date. the appearance of the breed “Ural Rex”.

The Zarechensky population of cats with curly hair is not the only one.

Subsequently, such animals were found in several regions of the Urals.

It can be seen and purchased in Russia.

There are kennels with curly kittens in Yekaterinburg, Moscow, St. Petersburg, Perm.

Rex was also brought to the German city of Dresden. 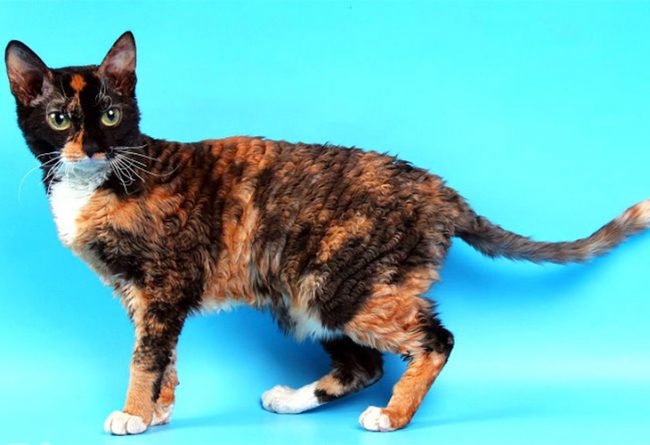 Crossing of Ural Rex with cats belonging to others breeds prohibited

According to the standard adopted by the WCF system for this breed, the animal must have the following external indicators:

Important! From the photo you can see that Ural Rex wool is different from wool Cornish Rex and Devon Rex. Curls at the first are formed already in 3 months, and by 6 they turn into beautiful curly waves. If this does not happen, the animal will not be allowed. to participate in the exhibition. 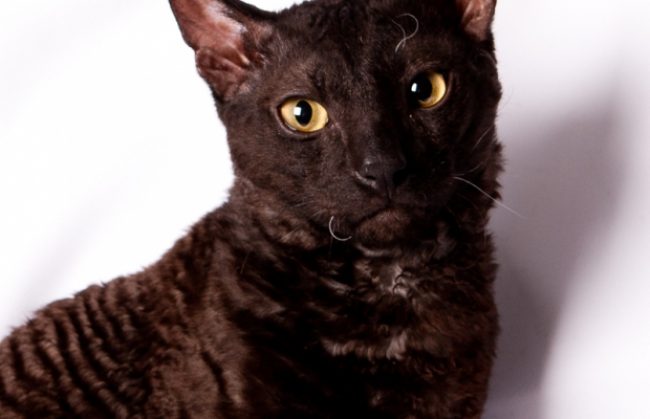 They grow motile and mischievous.

During this time, you can make a lot of fun with the kids a photo.

Do not once again leave curly skodniks alone at home.

They need to be looked after, accustoming animals to order.

Matured, Rex will become more balanced, but natural liveliness in cats still does not disappear.

Such a pet can be advised to have single people, and also to those who are often depressed.

Ural Rex cat has a friendly and affectionate character.

She will be happy to sit in the hands of the owner, issuing purring sounds.

Also this curly creature gets along well with others animals.

Important! Do not start the Ural Rex, if you are rarely at home. The animal must be given enough free time. To such cats many breeders are like members of their family, which pets answer them with love and devotion.

The undoubted advantage of adult rex is their flexible and patient behavior at various cat shows.

Judges can calmly pick them up to evaluate their appearance. animals.

The latter will not break out and scratch. This information Any Ural Rex nursery will confirm.

And if your cat still sins this, we advise you to read articlehttps: //kot-pes.com/kak-otuchit-kota-kusatsya/ 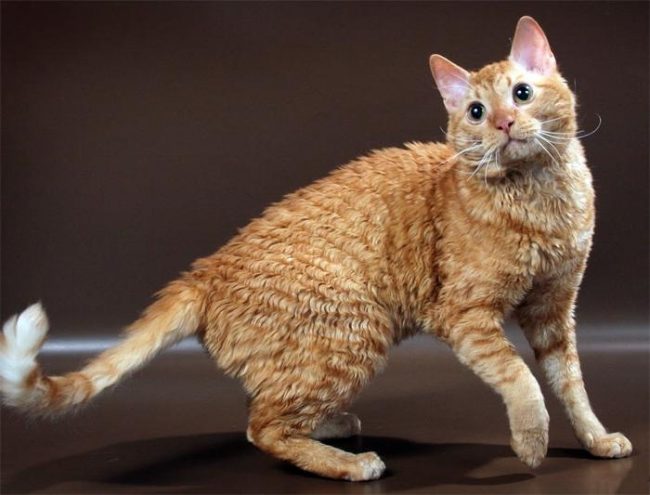 Cats of this breed can get along well with children. They will not cause harm to babies, even if they are unhappy with something

He will be able to submit all the necessary documents of origin baby and his parents.

The animal must have a veterinary passport, as well as birth certificate.

Important! Buying a Pet this breed from the hands or in the bird market, you can not be sure that he is a purebred ural with wavy hair. Unclean breeders can sell under his guise at all another kitten.

Before you buy a fourth friend, find out all about the condition his health.

So what you need to pay attention to when meeting with a kitten? 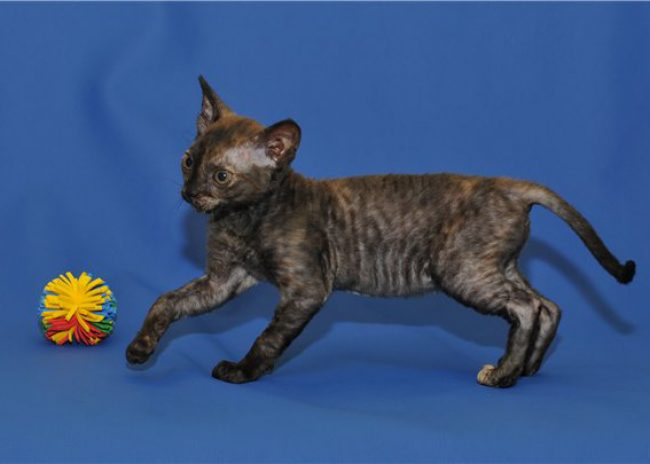 It is better to choose a pet at least 3 months old. In such aged kitten no longer needs mother’s milk

Ural Rexes do not require any special care.

It is worth bathing them only as the wool becomes dirty, since the skin of these animals dries easily.

It is enough 1-2 times a week to clean cats ears using cotton buds with a special solution, and teeth.

The latter are processed using a special brush and paste.

Important! Ural adult cat Rex can hardly tolerate brushing, if not previously accustomed to. To once again not to deliver the pet unpleasant Feelings, get food with special granules. They will scraping plaque.

The owner of a curly miracle should definitely buy for his favorite:

About how to make a house with your own hands, will tell articlehttps: //kot-pes.com/domik-dlya-koshki-svoimi-rukami/ 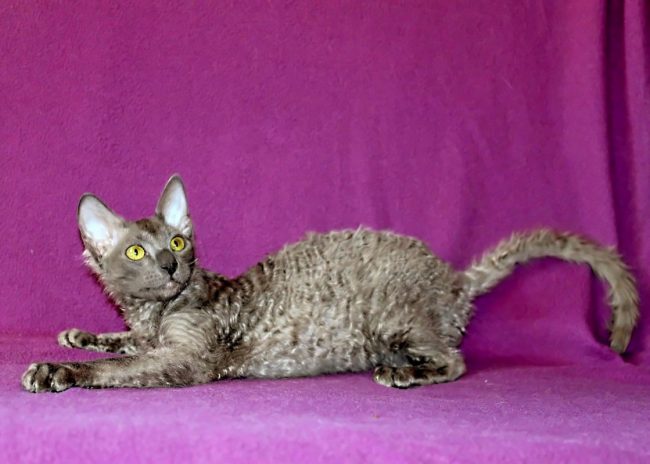 Ural Rex can be taken for a walk on a leash with a collar. However, it is worth doing in the warm season, since cats do not tolerate cold

It is important to spend some time grooming the pet.

There are reviews that if you regularly iron his coat a piece of suede, then the hairs of the animal will shine, and curly curls will retain their original shape.

If desired, you can buy a special comb that has rounded ends, and enjoy it.

Pay attention to when the Ural Rex cat first will begin to molt.

Then trim: gently pluck the kitten from the hair all gray hairs.

This procedure should be continued.

It helps the cat to get rid of excess hair, as they themselves Rex do it poorly.

Ural kittens because of their moving lifestyle often get dirty.

In this case, the owners of curly pranksters get up a question about how to be if frequent washing with such an animal contraindicated.

You can learn about how to properly wash a cat from articleshttps: //kot-pes.com/kak-pomyit-kota/

Then you can just use a special dry shampoo, which is applied to the wool and then removed with a cloth.

Important! Before you buy new ones care products for your pet, consult your veterinarian. is he He will say what it is worth using, and what is better not to resort to at all. Also, recommendations on the content of rex can give the nursery, in which a four-legged friend was acquired. 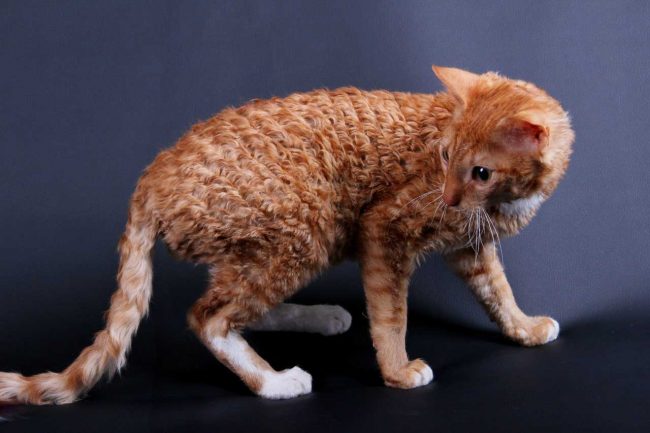 These cats are not recommended to bathe a few hours before exhibitions, because their curly hair does not have time to dry by the beginning Events

Ural Rex is not particularly picky in food.

However, the owner of such a cat must initially decide what will be eat his favorite.

The diet of an animal includes either natural products or replace them with high-quality feed, specially matched for this breed.

Sometimes breeders prefer to combine both of these food options.

You need to do this wisely. For example, you can feed the first week animal with natural food, and on the second – buy him food in vet store.

Also, do not forget to change the purified water 2 times a day bowl of cat.

Before you feed cats with natural products, it’s worth figure out which of them they can and in what proportions.

Any Ural Rex nursery will definitely advise you to include in the diet of animals:

Important! Kittens and adult cats do not must eat food from the master table. Also im strictly Do not give fried, smoked, spicy or salty. IN Otherwise, animals may become ill. 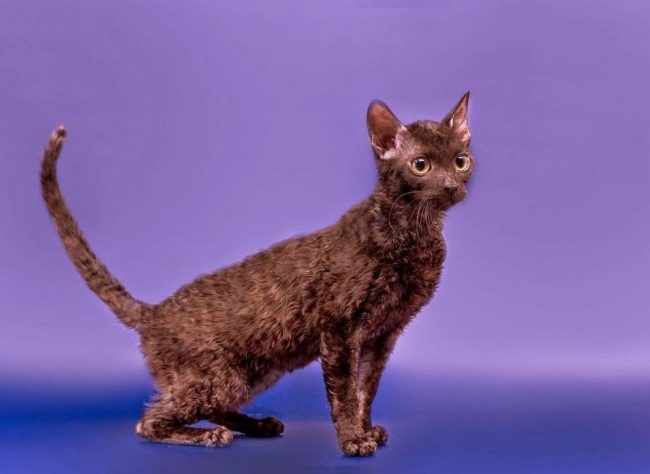 Cats should be fed at certain times of the day. Mostly breeders put food in a bowl of animals morning and evening

This breed of cats has a strong immunity.

Curly beauties lack a tendency to disease, which are inherited.

Important! Kittens of the Ural Rex need vaccination which carried out at the age of 4 months. Then they need to do vaccination to protect pets from various infections and diseases like a plague. Sometimes kittens are treated for ticks.

In the future, determine whether the cat is healthy Ural Rex or not, Measurement of its temperature will help.

The latter should be no higher than 38.5 ° C. Mostly these animals suffer from:

If Rex has a disease for the treatment of which anesthesia drugs will be required, remember that their dosage should be small.

There are reviews that these cats are having difficulty recovering after anesthesia.

Also, caution should be given to sedatives. drugs.

Before buying them to the Urals, discuss the application in advance medicines with a veterinarian. 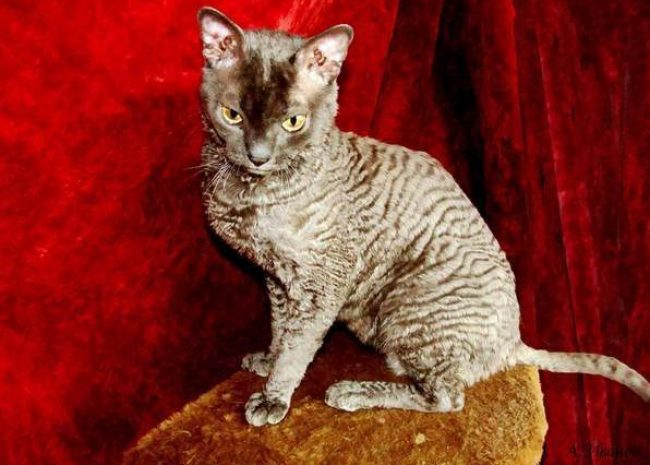 It is necessary to show your pet 1-2 times a year to the veterinarian. This will prevent possible health problems.

They may not make any sounds at all, but act in the usual way.

Owners do not always understand that their pets want a cat.

However, if you look closely at the behavior of animals, this still becoming noticeable.

People not planning to breed Urals, veterinarians it is often recommended to castrate or sterilize a kitten, in depending on gender.

This breed of cats is very affectionate to their cubs.

Their kittens receive a lot of warmth, affection and care from their mothers.

Already more than one nursery confirms that in the education of offspring the cat father also takes part, if he is allowed to be next to the kids.

It is worthwhile to think about their future fate in advance.

Babies grow and develop very quickly, so from 3-4 months you can start to attach them by posting photos of curly mischievous on specialized sites on the Internet. 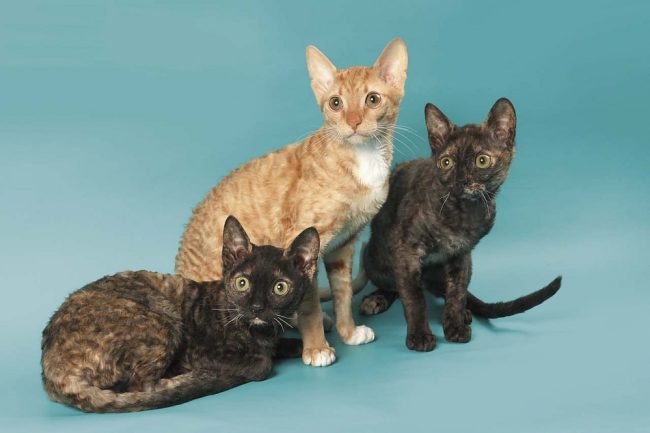 These cats are suitable for people who do not like to collect flying pet hair all over the house. Urals, on the contrary, need help during molting by combing their wavy curls

Before buying Ural Rex, you need to decide for yourself, why this breed is needed.

Some breeders purchase an animal so that later engage in breeding curly handsome.

And someone wants to have it as a pet.

Ural Rex cat with pedigree can cost from 15 to 50 thousand rubles.

It all depends on the thoroughbredness of the animal, as well as its gender, compliance with a specific standard, vaccination, etc. P.

Every professional Ural nursery in this case puts forward its price.

Basically, each of them has its own sites where you can see photos of kittens and reviews of breeders.

Some people decide to buy Ural rex on a bird the market.

Then the kitten will be cheaper, but there is a risk that the animal can be bought by the sick.

It is also often not known how purebred is curly pet purchased from the hands without documents.

Ural Rex: A curly charm with an unusual appearance

Ural Rex is a cat that will definitely become a member families. These animals get along well with other pets and are great get along with children of all ages.