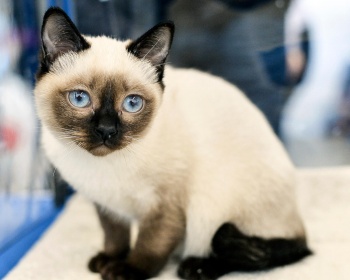 The toybob cat breed is relatively new, and its history occurrence began back in 1983, even before the collapse Soviet Union. It all started with the fact that the breeder involved breeding Thai bean cats, found bottomless on the street Siamese cat with a short tail. He crossed it with Thai bean, and eventually got kittens with very short tails. First such he called the kitten “scanty.”

However, until 1990, there is no information about the breed, and Only in the nineties did her purposeful breeding begin. IN In 1990, the breed Toyobob was registered in two Russian cat associations, however, it was then called differently – Scythian-tai-dong. In 1994, judge WCF Olga Sergeevna Mironova renamed Scyth-tai-don into the Toybob breed. It can be said precisely she became the author of the name.

In the late nineties, the owner of the cattery Si-Savat Alexey Abramchuk, decided to expand the gene pool of the breed, and for some time was engaged breeding these cats. A few years later, Natalia continued the business. Fedyaeva, owner of the cattery Little Angel. She crossed toyobes with domestic cats that had the same phenotype, however, in Rostov areas also grew toybob. To distinguish your pets from Rostov, she added the word Skiff to the name of the breed.

Toyobob cat breed came to the USA in 2004 – several individuals brought to the country a breeder of Burmese cats. After 4 years, namely in 2008, the breed received experimental status in the registry International Cat Association (TICA). in 2017, the breed was adopted by TICA and registered as “Preliminary new breed”.

If you have a big family and you are looking for a faithful, friendly a companion who could make friends with everyone regardless Age – Toyobob is a great choice. Lively and developed the mind makes these cats extremely interesting, with them never you have to get bored, and a positive, open attitude is literally towards to everyone, captivates from the first minute.

These are small cats – the toybob breed can weigh about one and a half to two kilograms. They are properly built, muscular bodies, medium-sized paws, wedge-shaped muzzle and ears middle length. Of course, perhaps the main distinguishing feature appearance – a short tail. average life expectancy 12-15 years old.

Toybob cat breed has a very cheerful nature, they active, very playful and retain these qualities in both young and in adulthood. They have a very developed intellect, strongly become attached to people and like to follow them from room to room no matter whether you are going to play with your pet. Do not be surprised if he follows you when you, for example, you are going to work or do laundry.

They love to watch what is happening around, especially – sitting on a cupboard or other high point. If you live in private house, do not doubt that your pet will climb trees and spending time in the garden.

Toyobob constantly cheer up their owners thanks funny playfulness and cheerful antics, which, however, never are not excessive or aggressively harmful. Toybob breed has a flexible and positive character, and does not create special problems, because it is recommended, including those who never there were no cats or other pets.

Children are perceived well, especially if the child knows how to handle the cat, and play with it carefully. Tooby do not like to be alone, and therefore, do not start this breed if you lonely owner and you are absent for a long time. Strangers are normal as with other pets if not met hostility.

With the health of these cats everything is in order, and any difficulties in this respect you will not meet. This applies to both immunity and and a genetic predisposition to certain diseases.

Toybob cat is short-haired and needs to be combed out once in a week, usually enough. It’s better to brush your teeth every day, but three times a week, claws are usually cut once every 10 days, bathing is carried out every 2 months. Also be sure to keep an eye on the cleanliness of your pet’s ears and eyes.