Instagram and YouTube star, Timosha’s parrot, continues to delight viewers with new videos that collect thousands views. What is interesting about this bird and how did she manage to conquer the love of thousands of audiences?

How and where does the feathered YouTube star live

A talkative Jacquot parrot named Timosha lives in Russian the city of Sochi. He considers his mistress Alyona a mother. So bird appeared in a woman’s family in 2015. At that time the parrot was only 3 months, and he had to be fed with a syringe, which affected such a tender relationship between a pet and its mistress. 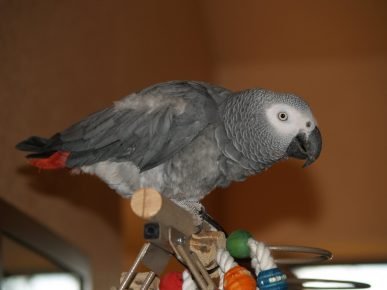 The parrot is very jealous and requires a lot of attention from its mistress and her husband Roma, whom he calls dad. In this regard, he hostile to aquarium fish living in the same apartment.

The bird began to talk at the age of seven months. First he could only repeat animal sounds: woof, meow, kwa and like that.

At the request of the “fans” of the feathered star, Alena created a page in instagram where she uploads fresh videos with a parrot. The account has more than 116,000 subscribers.

Since my mother was always categorically against the content cats and dogs in the apartment then my only animal friend was budgerigar who lived with us for five years. The name of the feathered Keshey. He was very noisy, especially in the morning. is he could crash awkward sounds in his bird tongue for hours, which very annoying to all households, so I had to cover him cage blanket. In addition to constant “cracking,” he knew a dozen words and phrases. Among them: “Kesha is good”, “Eat”, “Fool”, “Who there? “. And also he knew the names of all family members.

Video: Timosha talks with the hostess

What can a feathered “star”

Now Timosha knows more than two hundred words and is free to enter into dialogue and keep up the conversation. It easily mimics various sounds of gadgets and vehicles, as well as no less talented songs. All this bird happily does on camera without any drop of embarrassment and embarrassment.

As the hostess herself admits, Timosha loves to call Roma. After he called dad, he says “wash your fingers”

And Timosha has new entertainment. He is now mimicking mom, yes and, in general, all of them with their “Allo”.

Timosha is a conqueror of hearts with a charming voice and attractive appearance. For many single people, such a pet can be the best friend who brightens up gray days and raises mood. But it’s worth considering that such a parrot requires a lot attention and regular communication.