Russian blue belongs to the breeds of medium sized cats. The animal has a slightly elongated and muscular body. Neck Russian blue – slender, oval-shaped legs, and limbs – elongated. This breed is quite long, curl tail. The ears are slightly tilted forward, have a large the size. As a rule, oval large eyes have green color. The coat of Russian blue cats is short and silky, has the same length as the undercoat. Due to this property the hair seems very thick. Color is the hallmark of these cats. The norm is considered uniform blue color with clearly eye-catching silver tint. Cats of this breed are very graceful, as they have a refined body with a wedge-shaped head. 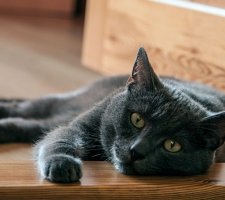 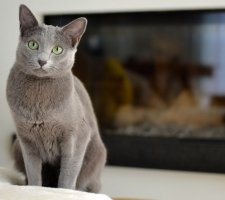 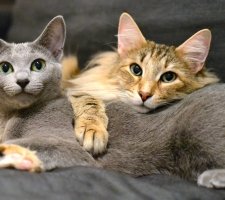 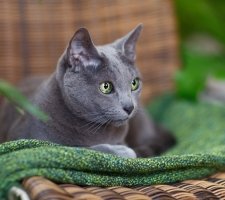 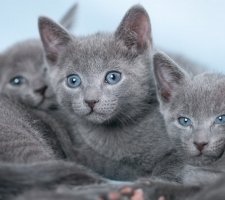 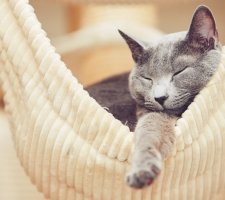 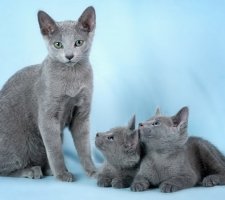 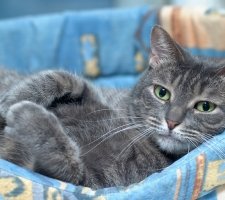 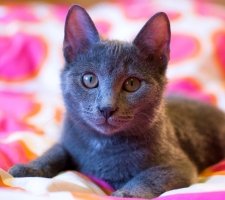 The history of Russian blue is not fully understood. The whole reason that the fact that these cats at different times had different names, therefore failed to reliably establish the origins of the breed. According to one of versions, a Russian blue cat in the mid-nineteenth century was brought by an unknown sailor from Russian Arkhangelsk to England. On a foggy albion, cats of this breed began to be called “Arkhangelsk cats.” Other names appeared a little later, the main ones are: “Maltese blue cat” and “Spanish blue cat. “The mysterious origin of cats and their extraordinary and catchy color still could not contribute to the rapid popularization of Russian blue. In this regard, the breed was inferior british blue cats and longhair blue which enjoyed great popularity at the end of the nineteenth – early twentieth centuries. At the same time, Russian blue is very stood out among representatives of other breeds. In 1939, the breed began to bear today’s official name – Russian blue cat. The Second World War contributed to the development of breed. In the war and post-war periods, the population of representatives this breed was rapidly falling. Professional breeders, who sought to preserve the breed, began to cross Russian blue with Siamese cats of similar colors, as well as British Shorthair cats. This has led to features of Russian blue began to gradually get lost. It was a decision was made to make maximum efforts to eliminate purebred representatives of the breed. Strangely enough, but on its own Russian blue did not become so popular that it’s impossible say about the USA. There, these cats were very much in demand. Same These pets were also popular in Japan. breeding work led to the fact that the Russian blue cat with half-length hair. Such animals began to be called Nibelungs. At the end of the last century, in 1987, the International The association recognized the Nibelungs as a separate breed. From this moment they no longer belonged to Russian blue cats. But, in fairness, I must say that even now the Nibelungs considered a very rare breed. Long-term attempts to restore the breed was successful, but the result of these works became and negative manifestations, which, although infrequently, but still found in these cats. Undesirable characteristics experts include any stains, stripes or blotches on the wool pet – color should be strictly blue with a noticeable silver a shade. Deviation is also considered to be deep-seated or same bulging eyes. It should be noted that at an early age in kittens there may be slight strips on the wool, but with age they are all disappear.

Russian blue cats are distinguished by good nature and their obedience, although sometimes some pets may be stubborn and independence. In a relationship with strangers, cats of this breed they are shy and shy. But in the circle of loved ones the animal will show its true feelings – tenderness and love to the owner and family members. Despite the fact that Russian blue cats love freedom, yet they do not show a special love for walking on the street. They prefer to stay in the house next to their loved ones. people. Owners of cats of this breed who have others in the house pets, don’t worry, they get along well with others pets. In cats of this breed quite clearly manifested hunting instinct. This feature is especially noticeable in those cats who live in a private house. Such a cat will become real find for owners who have mice in the house. Having bought a Russian blue, rodents will disappear. If you can’t realize your instinct as directed, pets will catch butterflies, sparrows and etc. The nature of Russian blue cats is formed in the process of their growing up, although its basic features are already laid down by nature itself. how and most calm cats, representatives of this breed do not require special training. The main condition for raising an obedient cat Russian blue breed – respect for the pet, balanced way of communication, regular active exercises. what As for the toilet, these cats are very easy to train tray.Russian blue cats get along in any family, outside depending on their quantitative composition. More often they meet among the elderly, the whole reason – flexible nature and ease of care. In addition, the owners of Russian blue cats claim that these animals are capable of exerting therapeutic effect. They, in their opinion, relieve stress and help to overcome nervousness. The process of socialization should start from the first day the kitten appears in the house. Pet need to acquaint with the outside world, to accustom to basic skills. If in If there are other pets in the house, you must immediately provide them contact with each other. True, in relation to a dog, difficulties.

Russian blue cat belongs to those breeds that do not require special care. Despite this, like any other breed, they require, albeit insignificant, but regular hair care. They need to be combed out systematically. Is optimal combing out twice a week. During active molting the number of these procedures can be increased up to three times in week. Russian blue cats are bathed as needed, the same goes for clipping claws. Separate attention need to draw on the ears of the pet. Monitoring their condition is necessary produce carefully and regularly. Treat ears with special a solution that is prescribed exclusively by a veterinarian.

It is important for the proper development of the animal proper nutrition. Russian blue cats are hunters, so meat should be included the main diet of the animal. It is advisable that at one time the animal received meat and dairy food. You can feed the cat beef meat or chicken. As for dairy products, experts I recommend using Russian blue cats in the daily diet kefir, low-fat sour cream, cottage cheese, natural yogurts, cheese. If you don’t have time to regularly buy the necessary products, you can resort to specialized cat foods that will provide pet with all the necessary elements. Such food will help maintain the health of the animal, will positively affect condition of the coat. Ideal is food that is seventy five percent consists of dry food, and twenty five of canned food.

Russian blue cats belong to those few lucky ones which are practically devoid of genetic diseases. how as a rule, the pet has good health, it is actively developing. But with the slightest sign of illness is to see a doctor. Timely diagnosis of a cat will prevent the progression of the disease.