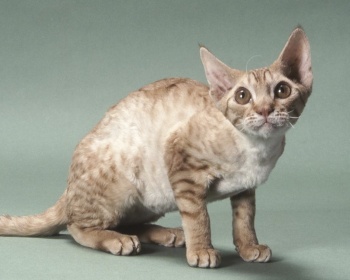 The Oregon Rex cat breed originated from a spontaneous mutation, which was observed in Oregon in 1955. Actually the name is directly related to the place of origin of the breed. Difference the first kitten of this breed from his brothers from the same litter, consisted in a non-standard wool texture.

Curly cats in those years gained popularity, and from England at about the same time, Cornish Rexes, also having similar wool structure. Subsequently, Oregon Rex mixed with Cornish Rex and Devon Rex, and today it is believed that the Oregon Rex cat breed in its pure form no longer exists.

Allegedly the last purebred cat Oregon Rex died in 1972 in America. Accordingly, in the framework of modern conditions, it is impossible to consider this breed as really existing in pure form, however, it is possible to tell what it was in moment of appearance.

Despite the fact that today these cats in their pure form are no longer find, their characteristic features are manifested in other rocks with curly wool such as Devon Rex and Cornish Rex. Can say that these two breeds would not have today such internal qualities and external species, if not for rex oregon. By the way – this cat was hypoallergenic despite the presence of hair.

Oregon Rex was small, medium-sized and thin tail. The muzzle is wedge-shaped, expressive. The fur of these cats could be almost any color.

These were affectionate cats, which allegedly were very people-oriented, and tried to spend with family members as much time as possible, and did not tolerate loneliness very well. They loved various activities, loved to play with adults and children, loved attention, but they themselves were ready to give their affection beloved person.

Despite the positive features, there were also negative ones. there is information that the oregon-rex cat could sometimes show arrogant attitude, inclined to self-affirmation and sometimes be naughty. Although, these cats cannot be called stupid, and it is safe to say that she showed disobedience not due to misunderstanding of the owner’s words, but simply due to internal stubbornness. But still, the kindness and affection in these pets is incomparably more.

They perceived children well, primarily because saw them as companions for games. Of course, if such a child knew how to behave with a cat. But often these cats could not get along with child, just because of childish obsession and sloppy animal handling. The oregon rex breed was not without hunting instincts. In a relationship with other pets loved to dominate.

Little is known about this, since in the middle of the 20th century it was impossible to do deep genetic research, like modern ones. However, it is known that in general these pets had fairly good health and normal immunity.

Like all cats with hair, the Oregon Rex breed needed weekly brushing.