The Norwegian Forest Cat is a large breed. Her average weight can reach 6-11 kilograms. In this case, the females are slightly smaller males. Cats of this breed mature slowly. Maturity they reach about five years of age. Long, dense coat – The main asset of the Norwegian forest cat. The head has a characteristic triangular shape, pointed on the chin. The head is decorated medium-length ears with a characteristic crest. Large almond-shaped eyes can have a different color: green, gold, copper, with this white cats may have blue eyes or different colors (one is blue and the other is green, gold or copper). A moderately elongated body gives the animal a look a strong pet, muscular hips and chest complement this picture. Large round paws have tufts of wool between the fingers. Tail Norwegian forest has the same length as the body, and, of course, he very fluffy. The water-repellent undercoat of cats of this breed has different lengths on different parts of the body. It is noteworthy that in the summer the period of hair on the pet becomes noticeably shorter. Concerning color, then it can be almost any with patterns or without them. A friendly Norwegian forest cat is a great choice. for any family where there are little children. Animal loves children’s attention to themselves, treats them gently, do not mind playing and frolic. Representatives of this breed get along well with others cats as well as dogs. True, in this case, from the first day the appearance of the pet in the house, it is necessary to conduct the process of socialization.

Photo of a Norwegian forest cat: 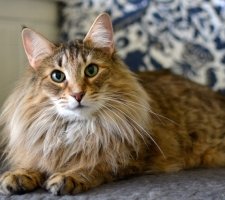 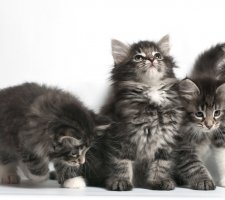 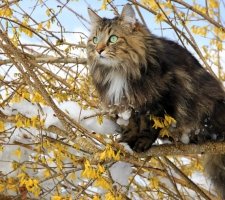 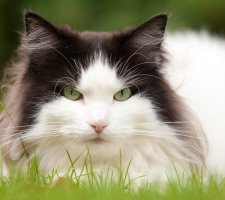 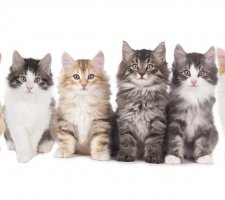 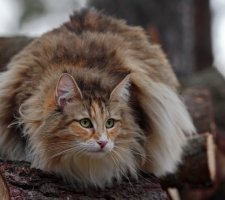 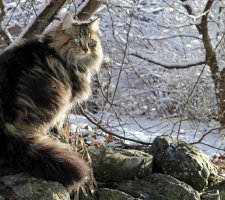 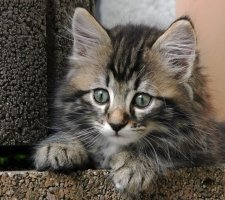 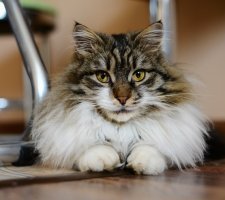 History of the Norwegian Forest Cat

The birthplace of the Norwegian forest cat, as the name implies, is Norway. Its history is deeply rooted in centuries and maybe even millennia. With this cat in Norway is connected many tales and legends. According to one of them, the Scandinavian goddess Freyja rode on a chariot drawn by six cats of this breed. Where and how did the Norwegian forest cat remain a riddle. It is suggested that cats of this breed may be descendants. long-haired cats from Turkey, who were brought to Scandinavia from Byzantium. Also, possibly, the origin of the Norwegian forest cat connected with Siberian cats from Russia. These pets could be brought by the Vikings or their appearance is associated with the usual natural selection: shorthair cats could as a result development to acquire long wool with a water-repellent undercoat because of being in a difficult arctic climate. In Norway, this cat always called “skogcatt”, which literally means “forest cat”. These smart cats have become for the Norwegians unsurpassed rat-catchers, they were very popular on farms, in cowsheds and stables. In 1938, cats of this breed were presented at an exhibition in Oslo. WWII made a negative contribution to the process breed development, but fortunately they managed to survive the heavy military period. But even after the end of World War II, the selection of Norwegian forest cats passed very sluggish until the seventies last century. In 1977, the International Federation of Cats officially registered the breed. Two years after that events several animals of this breed were transported to American continent. The breed began to gain its popularity, both in the United States and in Europe.

The Norwegian Forest Cat is distinguished by its tenderness and friendliness. It requires the owners of constant attention and affection. Despite the fact that representatives of this breed really appreciate the company of a person, yet they can have a good time without anyone presence. Even when everyone is home, these pets may not to especially show your desire to be in the spotlight. The only thing a Norwegian cat will ever give up is to be caressed by their master. These pets are characterized by a classic Scandinavian restraint. They only issue their quiet voice when they really need something, or when they seek attract attention. No wonder that such a large and a strong cat climbs well. It can often be seen at the very high point of the house. The animal is fearless and confident. in itself. As already mentioned, cats of this breed have waterproof undercoat. This feature suggests that Norwegian cats are not afraid of water, and therefore have a certain fishing instinct. If you have an aquarium in your home, make sure that it is securely closed, otherwise it the inhabitants can become the prey of your new four-legged friend. Norwegian forest cat is unusually smart, she is very fast He learns everything, loves to play and develops well in the environment active and loving family.

Norwegian Forest Cat is the owner of long hair with thick undercoat. Therefore, at least twice a week is necessary comb out the wool with a special brush or stainless comb become. If tangles are formed on the wool, they must be carefully remove. Cats of this breed practically do not need bathing. Everything the fact is that the undercoat is almost completely waterproof, therefore, the meaning in the bathtubs is, in principle, absent. periodontal disease and other dental diseases will allow weekly oral hygiene so every week not forget to brush your pet’s teeth. You can feed them like others thoroughbred cats. Require attention and eyes, the corners of which wipe once a week with a cloth (separately for each eye). Weekly treatments include monitoring the condition of the ears. It is necessary to ensure that they do not there were irritations, infections, inflammations. Treat ears like usually with a special solution prescribed by the veterinarian or mixture vinegar with water in a proportion of one to one. Perfect cleanliness cat tray will not only prevent the occurrence of unpleasant odor in the house, but also prevent the occurrence of various infectious diseases and also keep the coat clean animal. Make the Norwegian Forest Cat Great space and always a claw point. Norwegian Forest Cat, of course, is an animal that is predisposed to reside in cold climates. But this does not mean that The pet must live outside. In this case, your The pet may be attacked by dogs or other cats. Yes and do not forget that the pet needs communication, affection and attention, which you can’t give if the cat lives on the street. also properly feed the Norwegian cat to keep him beautiful coat and good health. If you consider the acquisition dry and wet food, then you should first carefully study the composition product, read customer reviews.

Most purebred cats have genetic problems character. Fortunately, this fate passed the Norwegian forest cat, which, in principle, is considered a relatively healthy pet. Consider several diseases that are characteristic of this Glycogenosis is a rare disease of hereditary nature that has a negative effect on metabolism glucose in the cat’s body. Most kittens with this ailment born dead or die within a few hours after birth. True, sometimes the disease may not manifest itself at all. up to six months. Surviving kittens with this disease most often die. a few months after birth. Using special genetic analysis can determine whether the cat is a carrier this disease. Polycystic kidney disease is one of the few genetic diseases characteristic of Norwegian forest cats. This affliction has a devastating effect on the kidneys. Diagnose the disease can be done using ultrasound Research. Hypertrophic cardiomyopathy is a form of the disease. heart, which is also inherited. One more the disease that pets of this breed can suffer is retinal dysplasia. This disease suggests the appearance of spots on the retina, which subsequently leads to a drop in vision or blindness. See also: the most common eye diseases in cats.