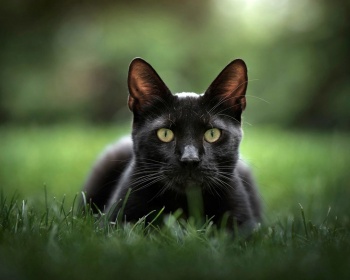 New Zealand cat breed Mandalay surprises and captivates with at a glance. The story of these animals is simple. an accident, which, by the way, is not so rare among cats. Once, Jen Parsons saw from the window of her house in the courtyard to her brown cat of a Burmese breed has a black cat, in appearance – oriental type. Here, it should be noted that in New Zealand almost all street cats are oriental type.

Of course, the hostess hastened to save her darling from the black stranger’s assault, but it was too late. This became It is known in 10 weeks when the kitten of an unusual appeared color, and Jen Parsons immediately realized who, so to speak, is the hero of the occasion. Of course – the same black oriental cat.

The female kitten really liked the hostess, and she called his Zanyminx Ebony (“Minx Ebony”), in honor of the shade of the pet, which was exactly like an ebony tree. Kitten turned into a cat of tremendous beauty, an unusual black color, with a very neat physique. Subsequently, this cat mated with a Burmese male of blue color with a fur pattern point (“seal point”).

After the set amount of time, two females were born, from which one had better external characteristics and more harmonious character. She was chosen for the next program. breeding. Another branch from which the Mandalay breed emerged, was initiated by two breeders – Dorothy Horton and Pat Hogen, again, from New Zealand. They crossed the Burmese cats with bright red local oriental type.

All these events, both in the first and in the second case, occurred for about 20 years – in the 70-80 years of the past centuries. And then, the breeders, so to speak, found each other, and already in 1990 they presented the best representatives in WCF, where literally immediately received official recognition as a new breed cats.

Mandalay, we can say the same Burmese cat, only with a different color. They are very similar in nature and the mandala fits literally everyone who wants to get a cat. They are really make life more interesting thanks to its playfulness, kindness, as well as the curiosity that manifests itself in almost everything. And this is not to mention the fact that the breed of cats mandalay has an extremely attractive appearance and inner nobility.

These are medium-sized animals with a proportional physique, paws of medium length and a long tail. The ears are a little longer than average triangular, regular shape. The muzzle is wedge-shaped, eyes orange, very expressive. Breed life span Mandalay 16-20 years old.

As for the character, here the breed of Mandalay cat is, can be said to be an ideal feline. This is very kind, affectionate pets who love attention, but with joy give their love to the family in which they live.

They have a very flexible and adaptive disposition, so they perfectly perceive people as such, and can also live as in private house with its own courtyard and in a small town apartment. Although, in the latter case, you need to provide the animal due activity through various games, toys, feline corner and house. If you live in a private sector, the cat does not worth losing sight of, as it is a rare and expensive breed, not to mention that any cat is a member of the family.

Mandalay breed has developed intelligence and huge curiosity to everything that happens around, and therefore, be be careful and close the cabinet doors and bags carefully. Otherwise your a pet is likely to want to see what is there inside and is it possible to play with it. As you probably already understood, these animals have a high level of energy, they like activity, but sometimes they like to just relax with the owner.

They get along well with children, have enormous softness in relationship with them and patience, which, in fact, may be both plus and minus. The fact is that the child, not seeing the response from the animal, may accidentally harm him, and therefore, be sure to teach your child the proper handling of pet. With other animals get along well, never show unreasonable aggression, do not attack first. If you live in the private sector, the exception may be rodents and birds.

Since this is a fairly new breed and its representatives in the world very few significant studies regarding hereditary there are no diseases. All in all, these are healthy cats with good exchange. substances and immunity, not prone to obesity.

Mandalay cat has a short, silky coat, a little softer than its nearest relative – burmese. Need her comb out 1-2 times a week, and enough. Always keep an eye on so that your pet’s claws are trimmed and your ears and eyes cleaned of deposits. Do not forget to brush your teeth. Bathe cat if necessary, once every few months.