Despite the fact that today produce a lot of different feed for dogs, many pet owners prefer to feed them homemade food, arguing that there are no preservatives, dyes and stabilizers. But, if the owner decided on his own to cook, then he must know how to properly compose a diet dogs.

What kind of porridge is made for dogs?

Porridge cooked with meat or offal and vegetables, are the basis of the dog’s diet. But not all cereals have the same nutritional value and beneficial to animals. The usefulness of cereals depends on from the method of preparation, so you need to know how to cook porridge.

The most useful for dogs is natural buckwheat. In not roasted cereals contain iron, phosphorus, calcium, magnesium and B, E, PP, D vitamins that are not destroyed even after heat treatment. Buckwheat contains flavonoids, which, forming compounds with vitamin C are natural antioxidants and beneficial effect on the state of the cardiovascular system. 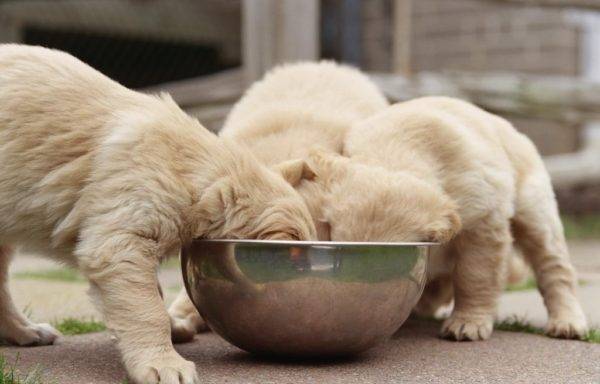 Buckwheat porridge is necessary in the diet of dogs with sugar diabetes, as it lowers blood sugar. Big the amount of magnesium helps strengthen bones, build muscle, good heart work. Loose buckwheat porridge quickly it is digested, stimulates intestinal motility and has significant nutritional value (in 100g of porridge 334 kcal).

How to cook buckwheat porridge?

Buckwheat groats must be poured with cold water for 20 minutes and drain it along with garbage and husk. Prepared cereals prevent in a pan and pour water or meat, vegetable broth so that liquid was 2 times larger than cereals. Bring the porridge to readiness, evaporating the liquid, and closing the lid, let it brew. In the warm butter can be added to the dish if porridge is cooked on water or vegetable broth. If you used meat broth, then additionally introduce fats is unnecessary.

Rice is a good absorbent, stimulates digestion and contains many useful micro and macro elements and vitamins. Rice has great energy value and should be included. necessarily in the dog’s diet. The most useful is not polished rice, since the shell contains the maximum the amount of fiber and nutrients.

Rice contains “slow” carbohydrates that provide energy dog. Preference should be given to steamed or brown rice, as it contains less compared to refined cereals, amount of starch, poorly digestible the dog.

Rice porridge is boiled until crumbly, and then insisted. IN if porridge is used as a natural absorbent, then it is boiled sticky and fresh, used to treat diarrhea, excretion toxins with vomiting.

How to cook rice porridge?

Rice should be thoroughly washed with cold water, especially if boiled polished rice Then, prepared rice is poured into boiling water and cook 30-35 minutes Then the porridge is covered and insisted. Broth, vegetables, meat is introduced into the finished dish. Rice porridge can be slightly salted and add a spoonful of vegetable oil to avoid clumping.

How to cook wheat porridge?

Wheat groats are poured into boiling water or broth and boiled long so that the grains are well cooked. In the finished porridge add vegetable oil and prepared meat, boiled vegetables and greens. Feeding dogs with wheat porridge often should not be. This is just additional dish.

Hercules oatmeal or cereal contains a large amount of magnesium, potassium, sodium, calcium and vitamins A, group B, E. Flakes porridge not intended for continuous feeding. It is contraindicated animals with urolithiasis.

How to cook porridge with oatmeal?

To preserve all minerals, flakes are better not boil and steam. Flakes are filled with hot water or broth, wrap up and insist. Freshly cooked porridge is given, stored oatmeal is not worth it. Oatmeal is not added to the dog’s diet more than 1 once a week.

What is not worth giving a dog?

Millet, semolina, corn and pearl barley porridge are the cheapest. By for this reason they are used to feed dogs. But doctors do not recommend use them since:

Porridge should be flavored with lean meats or well boiled offal. Be sure to supplement the diet with vegetables. They are boiled separately. Porridge is cooked on the broth, and vegetables are added to the finished dish. Flax seed can be added to porridge, but not more than 1/3 teaspoon per day for large dogs.

Watch the video how to cook porridge, food for the Husky dog:

How to choose porridge according to needs?

Porridge should be at least 40% of the total used for dog food products. Cereals should be alternated, compose. Do not feed the animal for a long time, even the most healthy porridge. To feed puppies, it is better to limit rice and buckwheat porridge until they reach 8-10 months., and then supplement diet of wheat and oatmeal.

Rice and buckwheat are suitable for eating dwarf representatives breeds whose weight does not exceed 5 kg. Porridge is necessary as a source micro and macro elements, vitamins, but before you feed her Pet, you need to properly prepare a hearty and healthy dish.

Dog feeding
Eating natural foods still causes difficulties in dog breeders. If there are practically no

Dog feeding
Watery stool, diarrhea, or diarrhea is a disorder of the stool that is often

Dog feeding
Chow Chow – a beautiful representative of exotic breeds, in need not only in

Dog feeding
The miniature schnauzer is the most compact representative of schnauzers and, although refers to
Leave a Reply Cancel reply
Recent Posts
Categories
Recent Comments
Archives