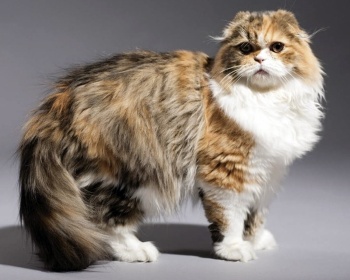 Highland fold cat breed belongs to the group of Scottish fold cats. By and large, the whole history of this breed of cats boils down to the fact that in the litter of their eldest nearest brothers, Scottish fold, kittens with long hair appeared. Ears however, these kittens were stacked with the same non-standard way. Although, at birth this is not visible – until the formation cartilage of the ear, which occurs about a month after birth, it is impossible to determine exactly whether the cat will have folded ears or not.

At first, as is usually the case, breeders ignored such cats, since the breed standard did not apply to them, however, subsequently, there were people who drew on a long lop-eared cats attention. Long coat gene manifested in these pets as the consequences of crossing with Persian cats, although, on this, perhaps all coincidences end up.

At least on the character of Highland fold the Persian genes by no one way not reflected. In the 90s of the last century, some breeders have achieved recognition of these cats as a separate breed. Around the same time, a new standard was written for this breed, and The name was given in honor of one of the Scottish provinces.

If you need a soft, calm, playful and loving cat, which at the same time has a highlight in the form of folded ears, highland fold is a great choice. This breed gets along well with everyone, possesses a harmonious and inquisitive character, and, over the years the cat does not become less interesting and curious. She always pleases his family and gives affection.

These are medium-sized animals, with a square body, round wedge-shaped muzzle, and of course, folded ears. The eyes are large and round, the tail is of medium length, as are the legs, although because of the coat, sometimes it may seem like the legs are shorter than they really is. Highland fold cat hair color there is a mass – from monochrome to tabby and tortoise, all possible colors and shades. The most rare and valuable is considered tricolor – tricolor kittens can cost more than usual. Average life expectancy of 15-17 years.

Highland fold cats are soft, flexible, they are very kind and affectionate. Many owners note that these cats almost completely devoid of aggression, both territorial and sexual. In other words, Highland fold is able to get along practically with all pets, including cats of the same gender, even if the size of the apartment is small.

Moreover, these pets perceive even strangers well animals, so to speak, by default – if they are not shown aggression or negative attitude, they are open and friendly. Also the same can be said about people, though, to strangers these cats may be shy at first, but without rejection or unreasonable aggression. They are pretty strong become attached to members of their family, love attention, but not demanding and not touchy in this regard.

They can spend time on their own, finding interesting things for themselves. occupation, as well as spending time with the owner in games, or just lying on his lap. You can say they generally like to spend time with people, although they have internal independence. Highland fold cat has a high mental poise, and despite the love of games and various activity, sometimes just sitting alone, like a magic figurine from The ancient temple of the forgotten Celtic city.

With children, these cats perfectly find a common language with the first minutes of communication, if the child knows how to handle animals and no harm to them. They have a very flexible temperament, so they adapt perfectly not only to different living conditions, but also to a change in these conditions. That is, if the cat will travel with you, go on vacation – she will only I’m glad, or at least for her it will not be a shock.

The main problem of all cats that have a gene of folded ears – diseases of cartilage and bone tissue. As a prophylaxis you can choose a diet with a high content of collagen, chondroitin and glucosamine, but if such problems appear, one power completely fix the situation does not work.

The Highland fold breed has a long coat, but it feels different from long hair, for example, in Persian cats. She more silky and as if enveloping your fingers. Wool need to comb out twice a week, but do it carefully. Claws usually pruned once every 10 days, bathe the cat every 2-3 months. By the way, the gene for folded ears makes cartilaginous tissue, including ears, extremely sensitive, and therefore when cleaning the ears Be extremely careful. Remember the importance of brushing your teeth.