Many perceive Freddie Mercury as a legendary singer, shocking personality and frontman of the rock band Queen. And only true fans know interesting facts from the life of a musician, in particular, that he was a crazy fan of cats, could not live a day without communication with his favorites and wanted to be taken care of after his of death.

Cats in the life of a rock idol

Numerous Mercury biographies claim that in the life of the singer at different times about ten cats were present. Such a love for fluffy appeared in the 70s of the twentieth century. It was during this period in the house of the musician appeared the first two pets – Tom and Jerry. FROM over the years, love only grew.

Oscar cat and cat are considered the musician’s first big love Tiffany Freddy loved them, brought a lot of different food from abroad, constantly buying new toys, tried daily communicate with animals. Even going on tour, he doesn’t forgot about his favorites, called home and asked to call the phone each of them. This tradition has been preserved with all subsequent cats. 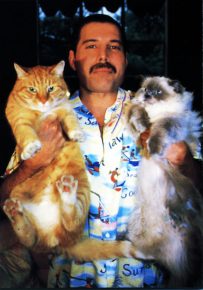 “His cats were his family, and the house for him was where he was cats “- wrote Peter Freestone

“As soon as he got to the hotel, we called up and he really talked to my cats. Mary brought Tom and Jerry takes turns to the handset so they can hear Freddy’s voice. This went on (“cat calls”) then for many years and with other cats that lived in his houses. ”

In the late 80s, Tiffany was diagnosed with cancer, and a veterinarian advised to euthanize the animal. This news greatly upset musician. Mercury interrupted a tour of Germany and went to the funeral.

The singer adored all his animals, considering them faithful friends. But a special love awoke in a musician with the advent in his life of two fluffy lumps. In the late 80s, the girlfriend of the singer Mary Austin gave him kittens: a thin dark brown boy and fluffy girl tortie color. New pets received names Delaila and Goliath. Kittens Freddy perceived as their own children: spent all their free time with them, played, talked. Delaila, however, took center stage in her heart. musician. He considered her his princess, constantly wore in his arms, allowed to sleep in his bed. 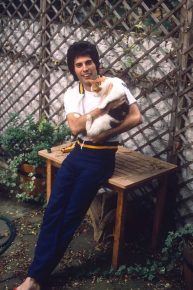 It was Delaila who turned out to be the only witness to the latter hours of Mercury’s life.

Goliath was also a favorite singer. Once the cat was gone, and his could not find for a long time. Then Freddie fell into a rage, threw out the window valuable Japanese vase, and then wrote an ad in which he promised a thousand pounds to anyone who finds Goliath. However the reward is so no one got it, because the cat was not far from Freddy’s house. 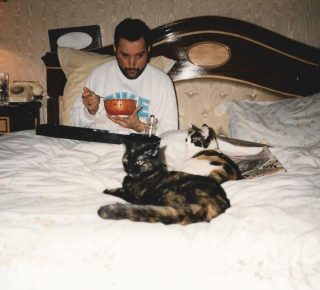 Cats moved freely around the house and yard, and with the onset at night one of the musician’s assistants had to collect them all and bring home.

A kitty of a dark color appeared in the fate of Mercury at the time when Queen was on tour – Mary Austin brought her again. Mercury enthusiastically received the new member of the cat family, however, other pets did not express the same joy. Animals either ignored the competitor, or hissed and fought with her. With time Miko – as the cat was called – still found the love of her brothers and even slept with them in the same basket. 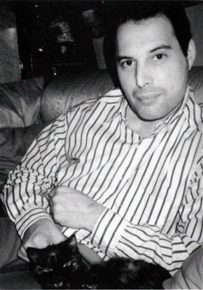 Miko was very cute and soon won the general love

Mercury often decorated his house with photo frames with pictures of loved ones. people. Of course, in the framework were pictures of his furry favorites.

A cat named Lily settled in the musician with the filing of his cook Joe Fanelli and personal secretary of Peter Freestone. The fact is that every time he saw an ad for cat food, Mercury said that he really like the snow-white cat Arthur acting in this video. However, the singer was immediately overcome by doubts: will there be such a cat color constantly get dirty? Joe and Peter decide to give Freddy a present white kitten, but they were afraid that the musician would be unhappy with the surprise. Handed the animal had Jim Hatton – a close friend of the singer. how as soon as Jim entered Freddy’s house, he exclaimed from the threshold: “Again dragged the cat? Your tail is sticking out from under your jacket! ” However, despite this reaction, the musician took the animal and fell in love as much as his other pets. 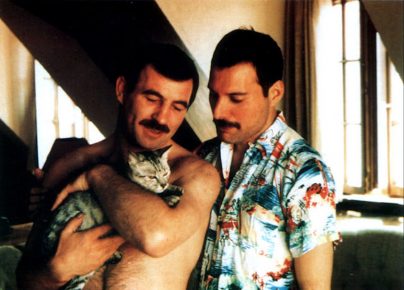 Freddie’s love for his cats was unlimited, he constantly patronized protected them from pain and trouble, and if something is wrong with them happened in his absence, then on looking after them the anger of the musician fell

Mercury’s pets received Christmas presents from him. Each cat had its own personal Christmas sock – in the British Traditions it is customary to put small presents in it.

“Cat’s footprint” in the work of the musician

First solo album, Mr. Bad Guy Mercury Dedicated to Jerry and his other pets, as well as to all the “cat litter” planet, writing on the cover: “This album is dedicated to my cat Jerry, as well as Tom, Oscar and Tiffany, and all cat lovers the whole universe – to hell with everyone else! ” 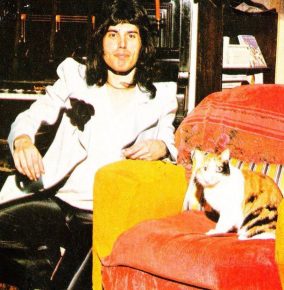 The singer dedicated the Delilah song to his favorite, in which he confessed in love with her: “You make me so very happy, when you cuddle up and sleep beside me “(” you make me so happy when curl up and sleep, clinging to me “)

The last Mercury album recorded with Queen, – Innuendo – has a cover featuring a singer surrounded by cats. In this the same record included the song Delilah, which is dedicated to his favorite – Delaile. Also in the composition is a guitar solo in performed by Brian Maya, similar to a cat meow. 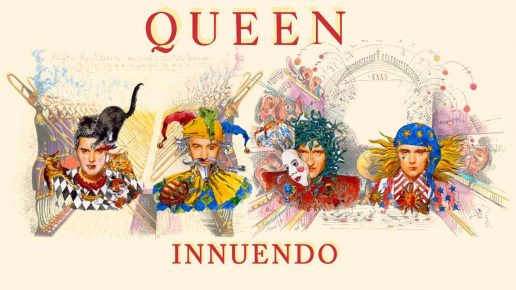 Another reference to the musician’s love for fluffy is present in his last portrait. In the picture he is depicted in a bright vest, on which painted all the mercury pets. 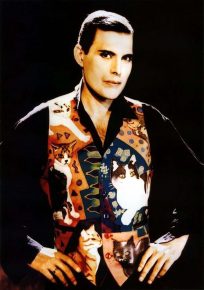 In the last portrait, Mercury is dressed in his favorite bright vest, a gift from Donald Mackenzie, on which he portrayed everyone Freddy’s cats, drawing them from photos

The fate of cats Freddie Mercury after his death

Some sources claim that the singer left his favorites impressive state however in the official text of the will of this not. Most of the property, including the mansion where they lived cats, Mary Austin departed – first a mistress, and then a devoted musician’s girlfriend. She took care of animals. 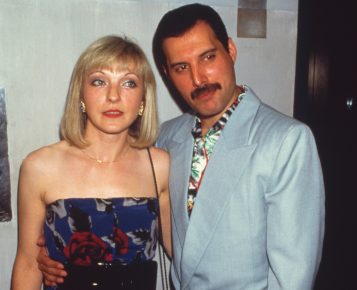 After the death of the musician, the cats were Mary Austin – “the only the woman he loved ”

Mary left five pets, not counting the Oscars, who left a few days after the death of the owner – he was never found. The woman decided that it was too much, and gave two cats (those that gave Jim Hatton). Others remained in the house until the end of their days. Mercury Delaila’s favorite survived to a deep, feline-like by standards, old age – up to 20 years old – and in the early 2000s was buried in garden mansion.

Cats won the love of Freddie Mercury to their independent and self-sufficient character. He found strength in them for further accomplishments and source of inspiration. The musician has repeatedly said that only cats love him sincerely and disinterestedly.