Cockatoo often become the heroes of the video. These are smart birds that often know how to talk, sing and dance. But some of them became famous for completely different talents.

Back in 2010, a crazy video appeared on the Internet cockatoo parrot. The video is still popular – more and more viewers get acquainted with a noisy bird. There is something to see: cockatoo spreads its wings, runs from side to side through the kitchen, leans to the floor and, most importantly, shouts loudly and indignantly. IN at some point the parrot even attacks the owner – it runs up sharply to him and pinches with his beak for his knees. In general, the feathered behaves inadequately and not in vain earned the nickname of the mad in the network. 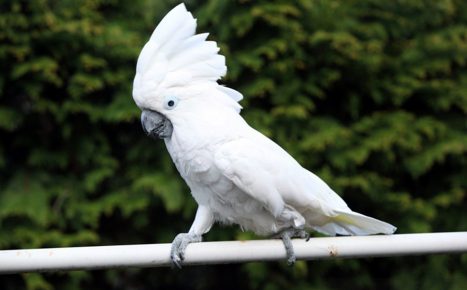 The hero of the video is a large white-crested cockatoo, or Alba cockatoo, also because of the crest it is sometimes called an Umbrella, which is translated from English means umbrella

Unfortunately, the background remained behind the scenes, and we do not know why the hero of the video behaves like that. Parrots scream in different ways reasons – for example, when a bird is hurt, bored or experiencing stress. Cockatoo, in addition, have an unbalanced character – the owners note that they are noisy and very active pets, which, due to mood changes, can infuriate and attack living with them people.

Some netizens have suggested that the parrot accepted reflected in the oven glass for another bird, and it made make him nervous.

In fact, he is concerned about his reflection in the oven. “Look! There is a bird in the oven! Come and help me scream at her! ”

He just tells his beloved people that some kind of crazy the bird sits in the stove and looks at him.

It is difficult to resist a smile, looking at a furious cockatoo. The hero of the video is very cute and funny, despite the makings of a bully. Probably, the neighbors of a noisy bird are not happy, but we can appreciate it. Watch the video and express in comments your opinion!