Obstructive and allergic respiratory diseases, also known as asthma, bronchitis, or bronchial asthma affect on many cats. Unfortunately, these diseases are not always easy. classified as they represent different respiratory tract disorders. 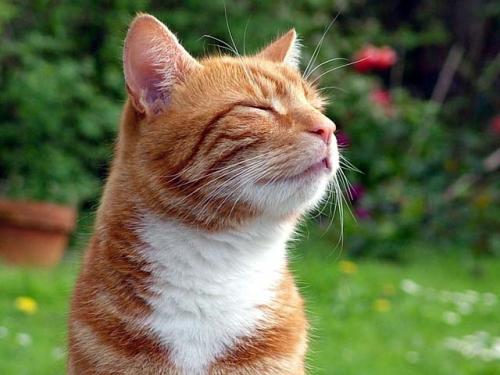 If the cat’s airways are sensitive to certain irritants, then their effect leads to a narrowing of the respiratory ways. Irritants are usually irritating substances, sprayed in the air, or substances that cause an allergic reaction in the airways. Regardless of the cause, the end result will be the same: 1) muscle cramps in bronchi, 2) increased mucus production, and 3) blockage respiratory tract with a variety of cellular elements. Failure to clear the bronchi of these elements makes the cat susceptible to secondary respiratory infections.

The cat with obstructive pulmonary disease is experiencing the greatest difficulty breathing during exhalation. Lungs can become a trap for air, causing them to swell. In some cases this chronic expansion of the lungs can lead to the development of emphysema in cats.

Which cats have the highest risk of developing asthma?

Obstructive pulmonary disease is the most common in cats, two to eight years old. Siamese cats are believed to have a slightly higher risk of developing asthma and bronchitis. According to According to statistics, cats get asthma more often than cats. Overweight and obesity in cats also increase the risk of respiratory diseases.

What are the clinical signs of asthma and bronchitis?

Coughing and shortness of breath (shortness of breath, breathing with an open mouth and etc.) are the most common signs of obstructive disease lungs. Coughing is the main symptom, but it may have many causes. Many cats during seizures coughing squat and stretch their necks. Whistling breathing is easy to hear with a stethoscope, but sometimes it so loud that even the owner can hear it. Also sneezing and vomiting are sometimes noted.

Any episode of open-mouth breathing should be considered on an emergency about which you should as soon as possible inform your veterinarian.

What are the causes of asthma?

Asthma, as mentioned above, is characterized by hypersensitivity to the respiratory tract. Small airways bronchi or bronchioles can respond to a number of irritants:

How is asthma diagnosed?

Diagnostics may require a series of tests to determine allergic lung diseases.

Minimum diagnostic tests include extended blood count, fecal and urine tests. These tests will show a cat’s overall health status and may give the key to understanding the root cause of the disease. Eosinophils, type white blood cells are usually associated with allergic reactions or parasitic diseases. Their presence in the blood gives a preliminary diagnosis of asthma.

Dirofilariasis tests (heartworms) – Depends on the geographic region in which the cat experiences labored breathing.

Cat Leukemia (VLK) and Virus Tests feline immunodeficiency – these tests are useful for determining the general health status of a cat. VLK and feline virus immunodeficiencies are often associated with respiratory diseases.

Chest X-ray – for asthma and obstructive pulmonary disease in cats, some common changes in the lungs. X-ray may determine the presence of parasitic diseases and also help rule out other heart and lung diseases.

Bronchoscopy, cytology or tracheal lavage – bronchoscopy allows the vet to examine the cat’s airways under anesthesia. After visual inspection of the airways, they may be obtained samples of the mucosa of the lining of the bronchi. These cells and mucus can be examined under a microscope (cytology). Via washing the trachea, a small amount of sterile saline can flush the airways and give samples of material deep in the lungs. This material can cultivate and examine under the microscope.

In some cases, despite being thorough and thorough diagnostic examination, the main reason cannot be identified. But even without determining the root cause of asthma, many cats can achieve acceptable quality of life with suitable medical care.

How to treat asthma?

For the successful treatment of allergic lung diseases in cats one or more of the following procedures is used:

Prevention – Any irritants that may cause or worsen breathing problems, should be avoided. In some cases, this may mean that you should avoid some fillers for the tray, eliminate cigarette smoke from home etc. It is important to pay close attention to environmental factors. environments that may aggravate or worsen a cat’s condition

Bronchodilators – these drugs are used, to increase airways and allow the cat to breathe more free. They should only be used as directed by the veterinarian and as directed to get the maximum the effect.

Corticosteroids are a class of steroids that have a beneficial effect on reducing inflammation, expansion airways and decreased mucus production. In many cases they are applied on a daily basis. When a cat experiences anxiety, as an alternative to pills may be used injections. These drugs have some possible side effects, and their reception should not be stopped suddenly, without careful monitoring blood and urine tests.

Emergency relief for an asthma attack may require the use of bronchodilators, oxygen therapy, high-speed glucocorticoids and adrenaline. If your cat there is a heart disease, then the veterinarian should advise to avoid the use of adrenaline.

Will a cat recover from asthma?

Obstructive pulmonary disease in cats is usually manageable but rarely can be cured completely. Sometimes a “cure” can be achieved if the root has been identified and corrected the cause of the disease. The goal of treatment is to reduce severity and seizure rates, as well as improving overall quality of life cats.