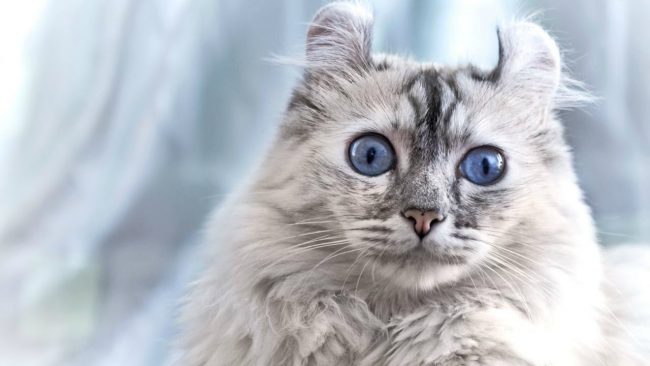 The American Curl cat is quite sociable and quickly gets used to new conditions.

She is curious, and throughout life preserves optimism, and therefore is one of the most coveted pets.

Representatives of this breed are very attached to their host and easy to learn.

You can find out about other smart cat breeds. here: https: //kot-pes.com/samyie-umnyie-porodyi-koshek/ 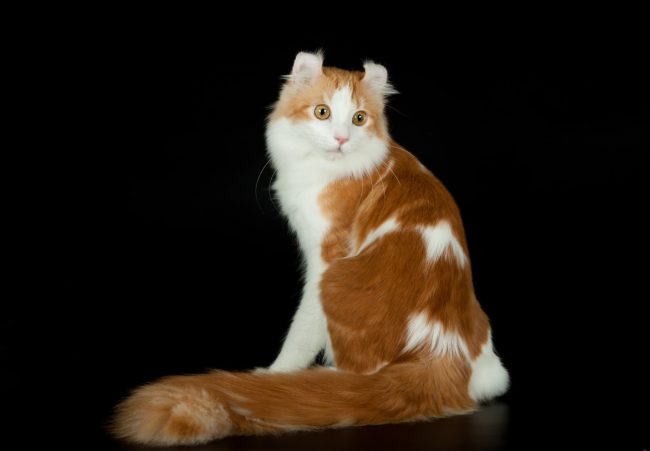 Mobile, tireless, having a cheerful disposition – just such are american curls

California became the birthplace of the breed American Curl.

In 1981, on the threshold of the house of the most ordinary married couple appeared cat with gracefully bent ears.

The owners of the house decided to feed her, and then left at home.

The animal impressed people with its sincere playfulness and goodwill.

The cat was called Sulamith, and already in the winter of that year she brought progeny.

In the litter were kittens with absolutely flat ears.

But already on the tenth day, the ears of two began to bend and subsequently, it was these kids that were considered the standard. 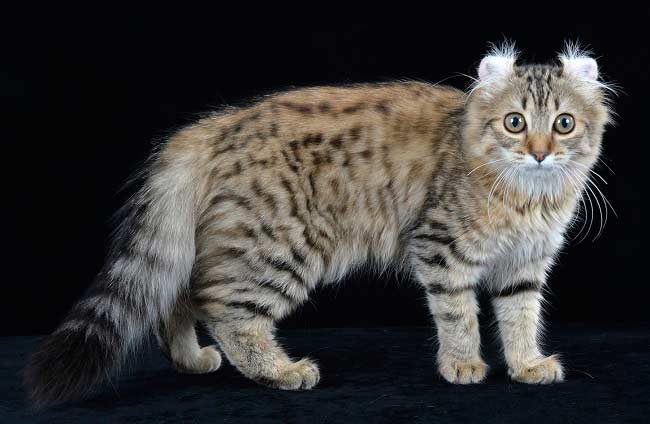 The phenomenon of appearance, which was previously considered a mistake of nature, today became the “calling card” of the American curl

Several years passed and the popularity of the unusual breed of the beginning grow at an incredible rate.

These cats were mentioned in prints, enclosing unique photos, they were interested in felinologists and experienced breeders.

But at the same time, opinions regarding the phenomenal appearance American curls were highly controversial.

Some tried to unravel this mystery and claimed that bent ears are evidence of gene abnormalities and even ugliness.

Others, on the contrary, admired the unusual appearance American Curl and were unquestionably fascinated by this breed.

As a result of numerous studies, the geneticist Roy Robins concluded that bent ears are natural mutation, and the gene responsible for it is autosomal dominant.

In other words, kittens with this gene will have ears bent over reason for natural patterns. 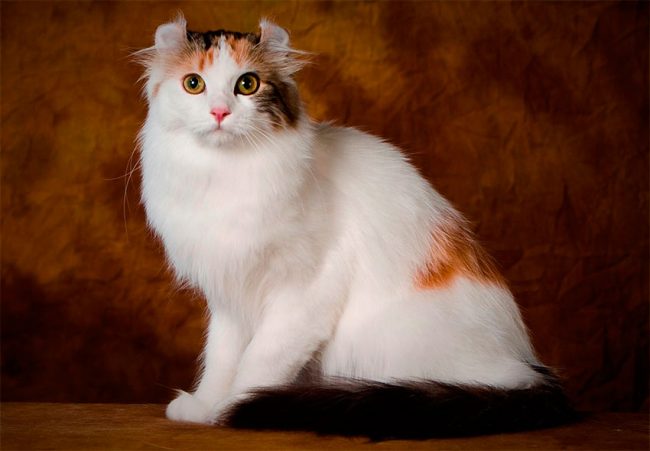 At that time, the American curl was a unique breed, which had no analogues

Shortly after the conclusion of the researcher, the standard was approved breed, according to which the American Curls were divided into two Varieties: Shorthair and Longhair.

Interesting! The uniqueness of this breed, in addition to ears, is that its representatives can have absolutely any color: from monochrome to tabby!

For representatives of the American Curl breed, as well as for Thai cat, characteristic observation.

Moreover, everything she sees is a guide to her action.

In other words, she draws basic skills from communicating with the owner.

It is everyday routine that becomes the main building material for forming an opinion about a person, his habits and needs.

Interesting! Many owners of these cats note that they are really very observant and very smart. Some pets quickly adopt their habits the owner and subsequently do quite unexpected things, for example, when lifting the lid of a laptop, press with the foot on the desired button or when you turn off the washing machine claws try remove clean linen from it! 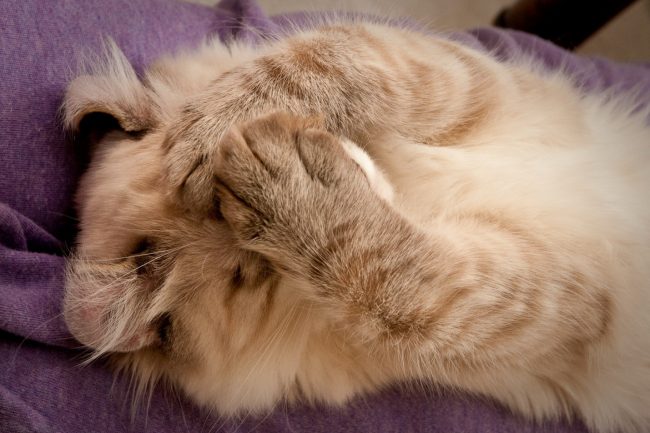 Curls are social and their confirmation is behavior

In addition, these pets: 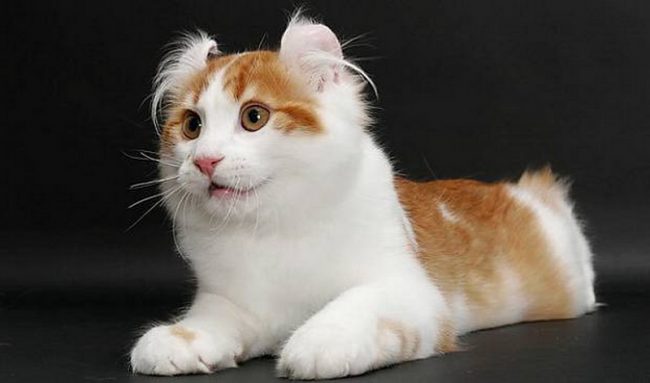 With a complete lack of pride, the American curl will be with joy to bring toys and balls thrown by the owner

The American Curl breed is just made for communication.

This pet will be the best companion, and his dog devotion will only contribute to fruitful development relationship.

Moreover, such a cat will show friendliness not only to everyone family members – he behaves absolutely calmly even in the presence of strangers.

Curl always treats its owner with special trepidation and at any circumstances.

At the same time, he subtly feels the situation and tries to be unobtrusive.

Cats of this breed will be happy to take an active participation in all home events and affairs.

On a quiet evening, they will watch TV with you and not will stay away during the general cleaning. 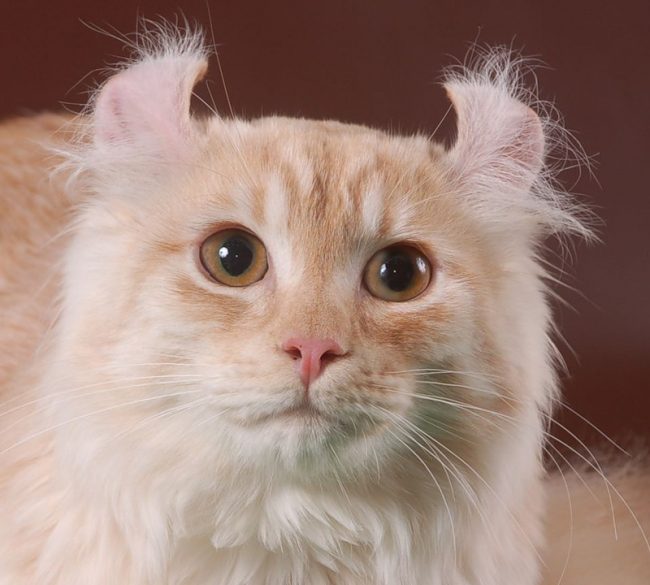 Curl has a calm character, and therefore he coexists perfectly in families with children

Moreover, he is able to find a common language not only with people – this the cat makes friends even with the dog, and if it turns out to be mischievous beagle or energetic dachshund then new friends will love to play together in the back the yard.

And this is another plus of this breed, since when you will not be home; the curl will not get bored.

If there are no other pets in your home, then there’s no forget to leave the cat a few toys and put your photo on in a prominent place – this will allow your pet to pass a few hours alone.

The quality of kittens is determined at the age of four months, as it is at this time that the formation of a coil on the ears ends.

As a result, the baby may be tribal, exhibition or homework.

Its price will depend on this.

On a note! The final angle of the curl is impossible. predict in advance even if you take into account the angle of the ear curl parents. Show relatives may well give birth to kittens inferior quality and vice versa! 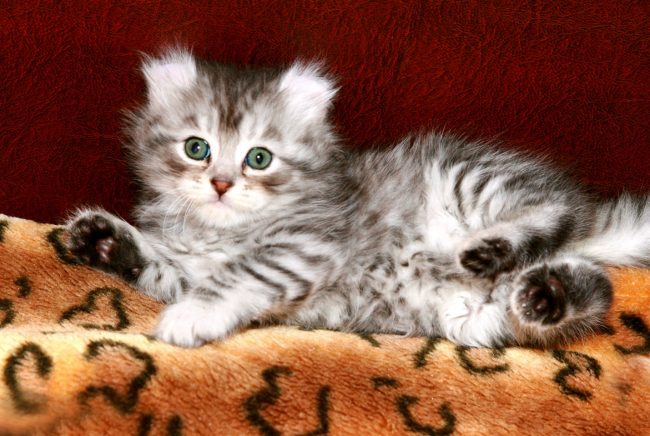 Assessment of breeding qualities is carried out by breeders on the basis of degree of inversion of the ears, as well as the type and general impression

Kittens put up for sale immediately after being acted out.

The same age is the minimum for transporting them to airplanes and for participation in exhibitions.

Like the Scottish fold cat Scottish Straight, Newborn Curl Nothing different from ordinary kittens, therefore, get a representative of this breed is desirable only after reaching four months age. 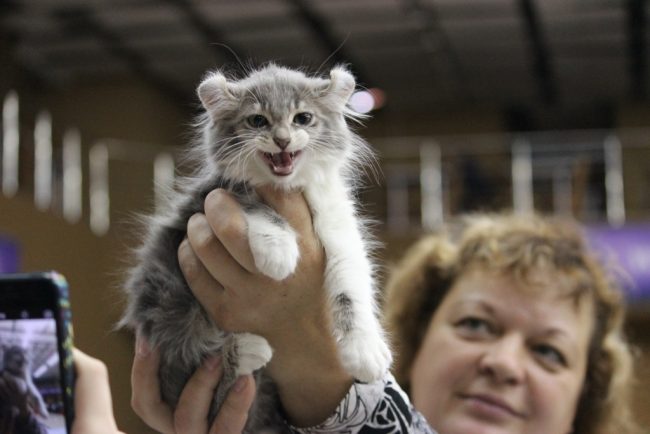 Ideally, the ear should be represented as a neat curve crescent moon

In addition, the price of an American curl may depend on pedigree.

For example, if the parents of the baby are Grand Champions, then he It will be quite expensive.

When purchasing a pet, be sure to check out all documents and pay attention to his behavior. 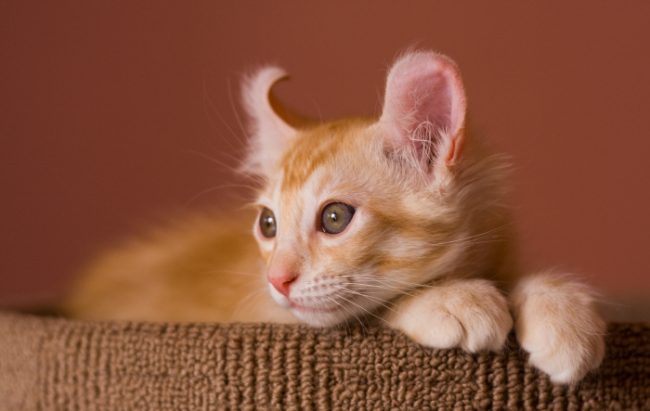 In nurseries, animals undergo preliminary socialization, and because even young kittens should not be particularly shy or aggressive

Both short-haired and long-haired American in leaving Curls are pretty simple:

Important! When removing dirt, remember that your ears curls are a dense cartilage, so during cleaning they are not should be straightened or delayed. These cartilages are quite fragile, therefore it is easy to damage them. The procedure must be carried out neat and soft!

You can learn about how to properly wash a cat from articleshttps: //kot-pes.com/kak-pomyit-kota/

They feel great in a private house where there is open space.

If your pet lives in an apartment, then you can walk him on a leash a couple of times a week. 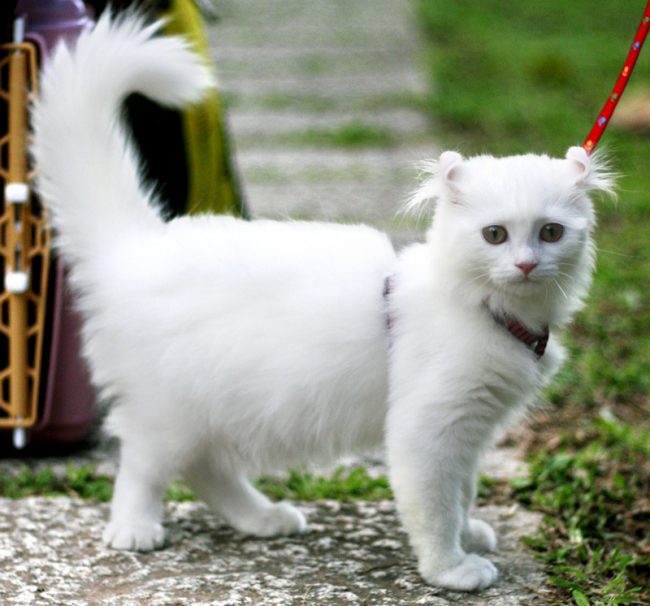 To do this, it is better to choose a park, garden or any other, not too busy place

Walking along the asphalt is best avoided, and across the road a pet should be carried on hand, as his curiosity is capable of turn into a tragedy.

Friendly curl is able to take the car for a living creature and joyfully rush to meet him.

The usual food you cook for yourself on the menu of these cats should not prevail.

The main thing is that the food is balanced. Attention is worth to feed on such foods as Bozita, Almo Nature, Royal Canin and Hills.

A bowl with clean water.

And milk and too fatty foods should be avoided. 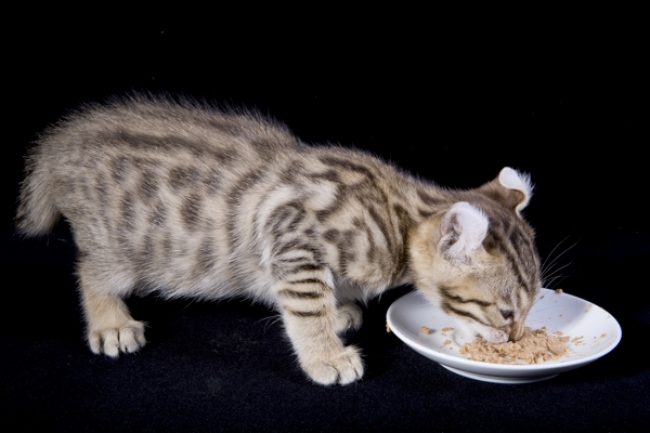 Food should be selected according to the age category, which usually indicated on the package

According to genetic studies, the American curl does not have propensities to diseases.

His swirling ears are the only mutation that doesn’t carries any consequences.

If you want to know how to clean your cat’s ears, we recommend read articlehttps: //kot-pes.com/kak-chistit-ushi-koshke/

With proper care and a balanced diet, problems with health was not observed.

Although the question is about the risk of developing cartilage defects to this day remains open. 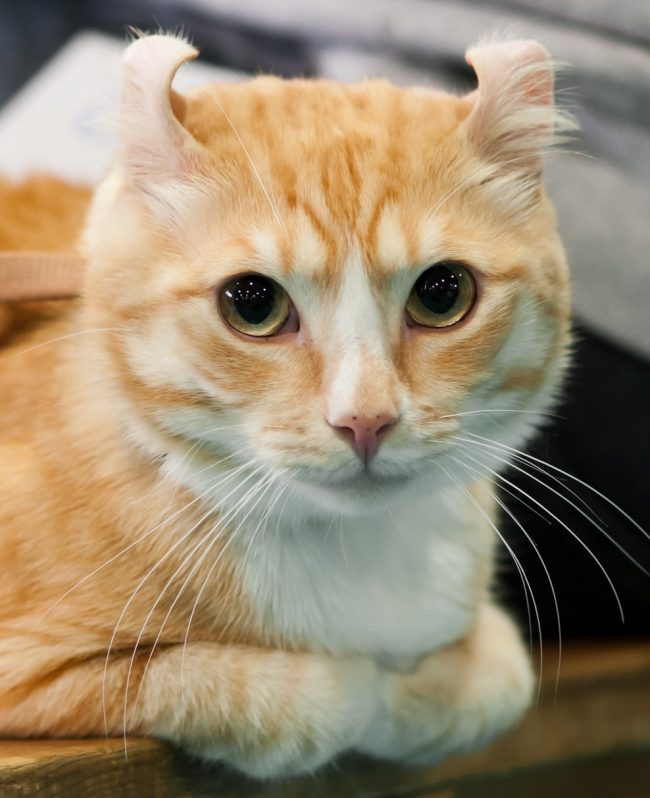 American curl cats have no genetic diseases and excellent health

It is advisable to purchase American curl kittens from an experienced a breeder who can provide a health certificate animal.

This document will display your vaccination history. and further recommendations.

Representatives of this breed are vaccinated in the general scheme and any separate vaccines for these cats are not provided for.

Curl responds well to vaccination, but two weeks before it the host should limit his contacts with others animals. 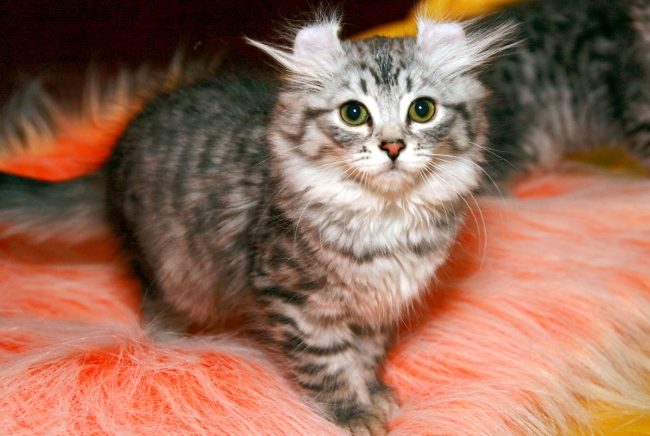 For vaccination, absolutely healthy pets are allowed: with normal body temperature and without the slightest sign of any diseases

Not so long ago, an American curl was actively crossed with representatives of other breeds, but as a result, not all kittens had bent ears.

For this reason, such knitting was prohibited.

Partners are selected within the breed, sometimes knitting is carried out with purebred cats, but always with those that are close comply with curl standards.

When two purebred curls are crossed, all kittens have ears will be curled.

If one of the parents has ordinary ears, then the gene will be transferred to only half of the offspring.

But at the same time, in homozygous individuals, babies with breed-specific appearance.

Such animals become the pearl of any cattery, and it’s they are most often involved in mating.