The largest alabai in the world (pictured), lives in Russia, in Stavropol Territory, the famous breeder Alexander Khudyakov. The name of the dog is Bulldozer, its weight is about 130 kg, and the full height – 2 meters, if leaning on the owner. The bulldozer has a huge number of awards that have won in many countries of the world. 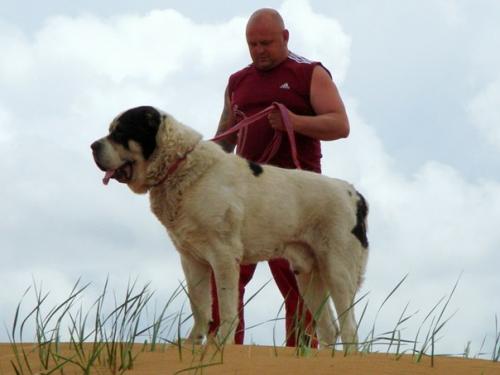 Now the dog has retired and, occasionally, at will, rolls on himself children. The bulldozer has a calm and balanced character and in his entire life he has never bitten anyone outside the house and the ring. The offspring of the famous Alabai also already has many awards, and indeed grandchildren are waiting for their time, a unique pedigree, as they say, obliges.

It is worth noting that Alabay did not achieve outstanding results. only thanks to amazing genetics. At one time, Bulldozer constantly trained and every day walked 10 km with special weighting.

Idin from fights alabai bulldozer that was won “dry”:

Idin from fights alabai bulldozer that was won “dry”:

Alabai is a type of Central Asian Shepherd Dog also called Turkmen alabai or Turkmen wolfhound. it The ancient, native breed has a history of more than 4,000 years.

The impetus for the development of the breed was given by military clashes and the need to protect settlements. To guard and participate in The Central Asian Shepherd was chosen for its fighting physical data. Thus, Alabai became one of the first breeds that were intended not only to protect livestock and the pursuit of other animals, but also to protect humans.

The first prefix Turkmen is found in 1935, then The dog was known as a Turkmen shepherd. It is believed that most of the best and purebred alabaev came from Turkmenistan. Subsequently, to show a special role Turkmen people in the cultivation and selection of Alabai, behind the breed the name of the Turkmen Alabay was fixed.