Many mammals, including dogs, have “extra”, or third eyelid, located inside the lower century. It serves as an additional protective layer of the eye, especially during time for a fight or a hunt. The third eyelid contains gland, which produces a significant portion of tear fluid. When is this gland falls out, this condition is known as “loss” (omission, prolapse) of the third century. 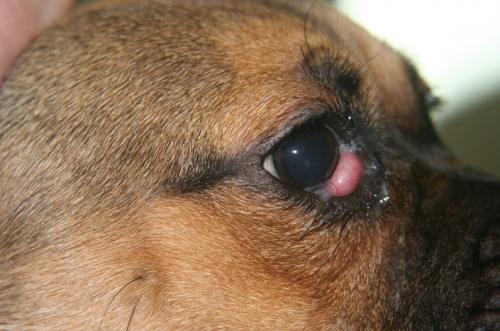 What are the signs of a third century loss?

The prolapse of the gland of the third century looks like an appearance a red film (lower eyelid) near the nose or muzzle. Fallout can be large and cover a large part of the cornea, or it can be small and occur periodically. At any sign third-century loss, you should immediately put in Notify your veterinarian about this.

What are the reasons for the loss of the third century?

Third-century iron is usually attached to the bottom the inner circumference of the eye with a sinewy connection. At In some breeds, this compound is thought to be weak. According to statistics, such problems are most often affected by such breeds like cocker spaniels, bulldogs, hounds, shih tzu and others brachycephalic dog breeds (with flattened muzzles and short limbs). Burmese and Persian cats also relatively common encounter is the loss of the third century.

How to treat the loss of the third century?

The treatment consists in surgical correction of the gland of the third century. It is important that the surgical treatment is as good as possible. faster to minimize possible damage. This is important because that third-century iron produces up to 50 percent of the water lacrimal fluid. Without the required level of fluid production, your dog is likely to develop dry eyes, which can seriously damage your eyesight. Your vet should discuss with you the appropriate surgical method, which best suited to the condition of your pet.

What is the forecast?

In most cases, the iron returns to normal functioning for several weeks after surgery. In about 5-20% of cases, repeated prolapse of the gland may occur. third century, which will require additional surgical interventions.

Many animals that have prolapse in one eye, in ultimately, they will experience prolapse in the opposite eye. Surgical correction of the third century is the main treatment method due to the development of dry eye syndrome. In heavy or chronic cases, removal of the gland – may be the only option, especially if its function is greatly reduced or missing.