In cats and dogs, various parasitic infections are common, which include external parasites (fleas, ticks) and internal (worms, nematodes, cestodes). Milbemax contains milbemycinoxime and praziquantel. These ingredients are effective in controlling and preventing some of the most common parasitic diseases in dogs and cats. Milbemax used, as a rule, to prevent and control infections, caused by nematodes, tapeworms, heartworms and whipworm in dogs and cats. 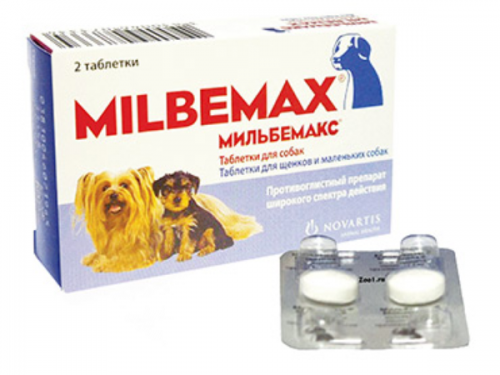 Milbemax’s action is based on impaired transmission of nerve impulses leading to the death of the parasite. Praziquantel is effective against worms. It impairs the function of the suction cup of the parasite and stimulates the movement of the worm. This causes a bias attached to the digestive tract parasite and its elimination with feces.

Milbemax and Proziquantel are prescription drugs and can only be purchased with a veterinarian’s prescription.

The use of milbemax / praziquantel for dogs and cats

Milbemax, praziquantel are used to treat nematodes, roundworm, whipworm and tapeworm in dogs and cats. The drug is very effective to prevent heartworm infection. Veterinarians also use milbemax to treat demodectic scabies.

Milbemax is one of the drugs that is effective for destruction of microfilariae.

Precautions and side effects

How to apply milbemax

Milbemax is available in two versions: for cats, and for dogs.

Milbemax dosage for dogs and cats

The cost of the drug milbemax

The price of milbemax depends on the dosage (destination) and form release. The average cost of the drug varies from 150 to 400 rubles. You can order or purchase milbemax, as a rule, in any pet store or veterinary pharmacy.