German shepherds remain one of the most popular animals for keeping as pets. They are not only beautiful and graceful, but also incredibly loyal and devoted companions. But, like many other purebred breeds of dogs, German shepherds, are known to suffer from certain genetically inherited diseases, as well as from some acquired. 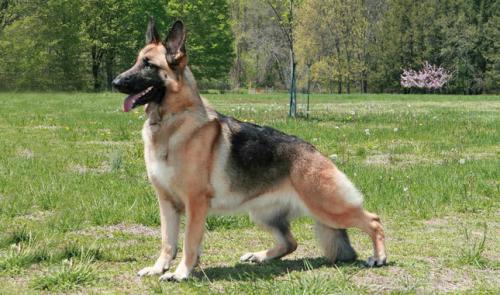 The average life span of a German shepherd is from 10 to 13 years old, and if you are thinking of making it for yourself, you better be aware of some health problems as well as some the initial symptoms of illnesses that may develop in your dogs. If you are thinking of a puppy, it is important that you contact an organized and reliable breeder who has a good a planned breeding program and reduces the risk of any hereditary disorders.

The following is a list of the most common problems with health in German shepherds that are either hereditary or acquired:

Hip dysplasia due to abnormal hip development is common a disease in German shepherds that occurs when the dog is still growing and developing. In shepherd dogs with dysplasia, as a rule, severe lameness appears, and in severe cases, arthritis and debilitating pain when moving. If you suspect a dog on hip dysplasia, then consult your veterinarian as possible faster, because with early diagnosis your pet will receive timely therapy and will feel much more comfortable.

Unfortunately, German shepherds tend to suffer from epileptic disorders that can be quite intimidating when occur the first time. However, the disease can successfully controlled with a certain type of medication. As epilepsy is incurable, the German shepherd will have to take drugs for the rest of their lives.

This serious illness is very similar to multiple sclerosis in people. The dog’s condition gradually progresses to hind paralysis legs. Degenerative myelopathy is incurable, and usually diagnosed in middle-aged dogs.

This is an infection that develops around the dog’s anus and is accurate the cause of which is still not known. There are some guesses that it can develop due to fluffy and thick tail, which does not allow to ventilate this area properly way. This disease can be treated in several ways, however, it is quite expensive and the infection is usually repeated.

Hemophilia is a blood clotting disorder, which leads to severe and often uncontrolled bleeding. The disease occurs only in males, so it is important that together with the breeder, you were sure that none of the dog’s parents suffered from this disorder. It is worth noting that, although from only males suffer from hemophilia, females can also be her carriers.

Pancreatic insufficiency is a disease that most common in German shepherds. Dogs suffering from diseases, unable to properly digest food, in as a result, they remain constantly hungry. Dogs with this disorder must take medications all the rest of my life. Drugs usually consist of pancreatic enzymes and can be added to food in capsule form.

Flatulence and bloating of the stomach (intestines) are very dangerous a condition that can occur after very quick adoption food and / or heavy exercise after feeding. If you If you notice bloating in your dog, then immediately seek veterinary care, as otherwise, the condition may prove fatal in less than one hour.

German shepherd dogs are exceptionally loyal dogs, and if they were well socialized at an early age then they become very enjoyable pets and true members families, which is why they remain popular pets so long. However, although in appearance they seem strong and safe dogs, and in many ways it is, the breed has tendency to suffer from some hereditary diseases. AND potential owners of German shepherds and those who already hold them, must be aware of these diseases in advance in order to determine their initial symptoms. This is important due to the fact that in medicine, as a rule, the earlier a diagnosis is made and treatment is started, the better the prognosis. In addition, the dog will receive not only the right and appropriate therapy, but will also feel yourself more comfortable.