What does it mean if a dog urinates on vertical objects?

Communication with the smell of your urine is common communicative behavior of the dog. The label is usually made in its territory or near new odors, especially those that other dogs leave. The volume of urine for the label is usually small. The problem is mainly common in full-fledged males, however many neutered males also mark their territory. If your the dog marks the places where other dogs urinated or when entering to unfamiliar territory, then this may be a form of territorial marking. Some dogs may also mark new territory. when moving to a new house, and brought renovated or new furniture, in such cases furniture access control can help for the dog. Those dogs that start celebrating their homework environment, can do this in response to stress or anxiety. Hormonal effects or sexual arousal, especially in full males can also lead to the strengthening of such behavior. 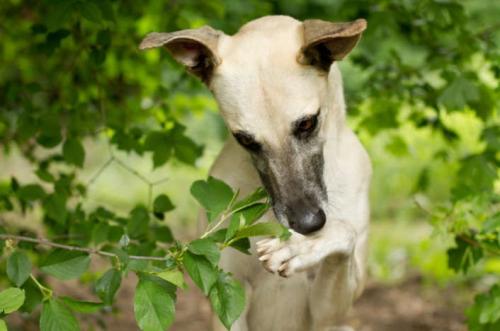 How to wean a dog to tag?

Castration will reduce the desire to tag in more than 80% of the males, but completely eliminate the problem in only 40%. Sterilization also recommended for bitches that can mark territory during estrus. Remember that almost any vertical object that your dog can smell and explore, maybe a target for marking. Thus, urine and sexual odors of other dogs and animals can be the strongest incentives for labeling, and your the dog can be attracted by any new smell that she will find in its path.

How to reduce the desire to tag on the street?

Monitor and limit the dog’s behavior when it marks territory during outdoor walks, as a rule, impractical. On a walk, you should work on training your dogs walk effortlessly near you and sit down when you stop. If you want to also wean the dog to tag on street, then you will need either a leash or a leash with a muzzle. With a leash you can immediately unscrew the dog from the stimulus (potential target for the label) as soon as you You will see that the dog is studying, sniffing, or starting to lift its leg. Learn to predict and warn. After you reach a place where this is acceptable for your dog, you can let her inspect, sniff, and tag objects, and positively reinforce this behavior.

How to wean a dog to tag at events?

Dogs that mark unfamiliar premises such as a house friends, exhibition or veterinary clinic, must be on a leash, at least until they get used to the new environment and will have the opportunity for controlled research of a new surroundings. If possible, in many cases it is advisable leave the dog at home, and not take it to places where there will be many odors that can captivate her and stimulate her to tag. If if you take the dog with you, be sure to hold it securely and you can prevent any incident.

At such events, you can use a toy with which your dog will play, or introduce her to others people and do something constructive. If your dog starts worry and worry, or begins to explore and sniff objects, then this may be a prelude before marking, therefore this behavior should be prevented or eliminated by leash.

How to wean a dog to tag at home or in an apartment?

If your dog is tagging in its own home, then you must first determine the cause of this behavior to understand whether it is temporary or single event (e.g. visiting another house by a dog or introducing a new element into the house), or it is caused any concern. If the matter is anxiety, then you need to find it cause and eliminate it. When new objects appear, such as plants or furniture, or when moving to a new home, control your dog with a leash if necessary, and watch out for her when she will explore new objects or a new home. how only the dog will get used to the new environment, you can give her some freedom. A diffuser may also be useful in this case. with pheromone for dogs (for example, adapted).

The treatment of specific disorders will depend on their cause. Make sure your dog is regularly trained and rewarded for this, and that u is busy with regular and stimulating physical exercises and games. In periods when you do not play, do not teach and don’t practice it, your dog must learn to calm down (preferably in your bed), or play with your toys. If the problem is related to fear or anxiety due to another dogs in the house, then separate them, and gradually re-conduct rapprochement program. If your pet is tagging in the house due to noise or due to separation from you, then all these problems can be solved with using specific teaching methods.

When you are available for observation, you should play, train or train your dog, or make the dog busy enough or relaxed so she doesn’t have any desire to tag. If your pet starts wandering or looking at objects that were previously marked, then you should prevent this behavior with a verbal command or leash, and give it any activity, taking it with something.

Using a leash (as described above), you can not only prevent your dog from any attempt to tag, but gradually suppress such behavior by stopping it as soon as you see characteristic signs. If you cannot control your dog, then place it in the area where it will mark with very small probability (for example, in her bedroom or cage), or place her where it will be acceptable to you, for example, in the open in the air. If you know the specific incentives for the tag, then you can Be able to keep your dog away from them. you also can use some fences or traps that will restrict the dog’s access to certain areas. If you know, that the remaining urine from other dogs remains on your property, then use an odor neutralizer. While walking on the street you must give the dog a reward if she has marked the place where it is allowed to reinforce this behavior exactly in the right area, but you shouldn’t let it tag anywhere else!

In some cases, the desire to tag may be reduced if the level of anxiety or agitation of the dog will be reduced. In these antidepressants, sedatives preparations, pheromones and some natural products, but completely they are unlikely to be able to stop such behavior on their own.