Why does a dog produce a lot of gas? It becomes a problem when the guests arrive. She is ill?

At first it is advisable to understand the terms. “Bloating” is the formation of excess gas in the stomach or intestines. Strong flatulence can lead to belching or expulsion of gases through anus. Flatulence can also lead to rumbling in the gastrointestinal tract, which can sometimes be heard throughout the room. Belching, rumbling, flatulence can periodically occur in all dogs, but if they become excessive, this may indicate on a possible problem requiring medical attention. If these symptoms develop along with weight loss or diarrhea, it’s quite probably something wrong is going on in the digestive tract, requiring examination by a veterinarian. 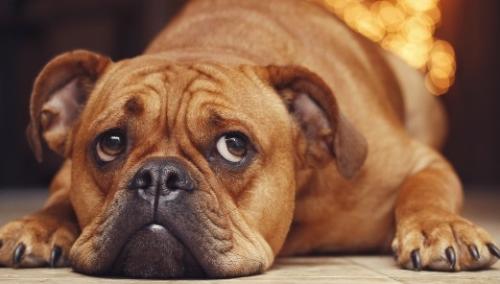 If the dog does not have diarrhea and is in perfect order, what could be cause strong gas?

A certain amount of gas in the digestive tract is normal. There are three source of this gas:

The amount of gas varies greatly from dog to dog, as in people. Air swallowing usually contributes most to flatulence and bloating. Physical activity or too fast food intake also increases the amount of air swallowed. Swallowed air may exit the body along with bloating for 2 hours. Another source of gas is the fermentation of carbohydrates and some fibers in the colon. Soy, which is often added to feed in as a source of protein, can also enhance flatulence depending on its quantity.

Is there a way to reduce the amount of gas in a dog?

There are several ways to reduce excessive gas formation and subsequent flatulence.

Easily digestible food – containing carbohydrates and protein components – reduces the amount of residue available for fermentation bacteria in the colon.

Fiber can also play a significant role in production. large amounts of gas in some dogs. And soluble, and insoluble fiber should not exceed 5% of the diet dogs suffering from flatulence.

An example of a diet with which you can significantly reduce flatulence and flatulence in a dog, is a transition from dry feed, which contains corn, chicken and soybean meal, to feed, which contains lambs, rice and barley. Vegetarian food for dogs can be problematic because of the likelihood that in it there may be sulfur-containing vegetables and legumes.

What measures should be taken to change the dog’s diet with the goal of reducing her gas?

The most appropriate approach is to work with a veterinarian who will determine the best suitable food specifically for your dog. The first step is to collect everything possible foods and goodies that you use with feeding and identify ones that can contribute to a problem. These products may include:

Carefully study all the main ingredients, this will allow you avoid non-recommended foods. Your vet can help you. with calculations of various nutrients. There are several therapeutic feeds that are designed to maintain the optimal state of the digestive tract and eliminate unwanted reactions to Food. Perhaps you should try several different feeds and rations to find the most suitable for your dog.

Your dog’s eating habits are also very important. Several small feeds per day, instead of one or two reduce flatulence by improving digestibility and reducing residues food potentially available for fermentation in the colon. Reducing the rate of ingestion will reduce the amount swallowed. air. Walking with a dog 30 minutes before feeding will be stimulate bowel movement and thus disperse excess intestinal gases.

Finally, it’s important to remember that the production of intestinal gases is normal process in the body. Strong flatulence and bloating if they are accompanied by weight loss or diarrhea, may indicate metabolic problem and should be thoroughly investigated. If there are no symptoms of the disease, it is reasonable to assume that severe flatulence in a dog can be reduced by diet.