By their nature, pit bulls are friendly, especially to people. Them aggression is usually directed at other dogs and people whom they perceive as a threat to you. Your pit bull puppy will grow up in an impressive, powerful dog weighing up to 30 kg, so it is important that you stopped any aggressive tendencies in the bud. 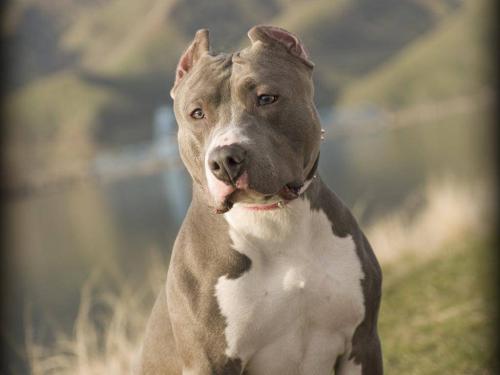 Fear and anxiety can cause aggressive behavior in most dogs. However, pit bulls are generally confident in themselves, and, being assertive dogs, are more likely to be aggressive towards dogs due to antipathy to them. Pit bulls are much more aggressive towards dogs than to people, so first of all it is necessary to suppress it is this type of aggression. You can determine the cause of aggression, watching your dog’s body language when it’s being acted upon various irritants.

A pit bull must be curious, alert and confident, but never harsh or unpredictable. If he will be afraid for example, a vacuum cleaner, it can stoop and not look at it. However, fear can soon develop into aggression. Similarly, he may become aggressive when new dogs enter his house or people.

Pit bull terriers are sports and powerful dogs. And even being puppies, they can be much stronger and more muscular than dogs comparable sizes. A quick walk around the neighborhood for a pit bull will not be enough. Swimming, hiking and even cycling will be more suitable so that the dog can burn its energy.

Gradually exposing the dog to irritants that cause aggression, you will eventually make her put up with them and save her from unacceptable behavior. It is much easier to do with puppy until he found his path, like adult dogs. If a, for example, your dog is aggressive towards strangers, then trigger the hook of aggression may be the sound of a doorbell. If you call door every hour, ignoring your dog’s reaction, then it gradually will understand that the door is just another sound in her life. Key to getting rid of negative reactions is to start a process with a low intensity, and gradually increasing it, the dog becomes more tolerant of stimulus or stimulus.

After you save your dog from aggression on certain irritants, the next step is to reinforce correct behavior with positive associations with it. Pit bulls love physical affection, so the best way to reward the patience of your furry friend is to stroke him and give a little affection. If your pit bull puppy is aggressive towards other dogs, you can also resist this if you each time stroking and caressing him, when he will be approached new dog.

Over time, your pit bull will know that good things are happening, when new dogs approach him. He ultimately will begin to anticipate fuss and pleasant strokes when he sees a new a dog. However, make sure your pit bull is on leash, as even puppies can quickly change their calm to aggression.

Unlike rocks with less persistent temperament, for example, Huskies, pit bulls are not suitable for aggressive teaching methods. Everything pit bull terriers are very sensitive, so they can become upset and preoccupied if punished or rough handling. Over time, anxiety may also turn into aggression. For this reason, to fix the bad behavior, only positive methods should be used reinforcements.

According to practice, puppies pit bulls need a more complex and laborious socialization than most other breeds. To your puppy it will require meetings with many people of various professions, as well as animals as soon as he has completed the course of necessary vaccinations. Create yourself a rule to show your puppy regularly other dogs. Interaction with adult dogs will help the puppy change their attitudes and attitudes towards other animals. If large dogs will regularly discipline him, he will learn how to him fit right into the world.

From the age of six months, write the puppy to the appropriate class or a group so that he can experience what it feels like to be surrounded the same irritable puppies. Different breeds mature with different speed, so it’s important to keep your puppy growing up. Pit bulls the formation of basic views on life occurs between the seventh and sixteenth week, so you should regularly “socialize” puppy during this period.