About a third of all households in the world have at least one cat or one dog. But when they were domesticated, when they began to live with people? It turns out that dogs and cats lived in homes our ancestors for many thousands of years. 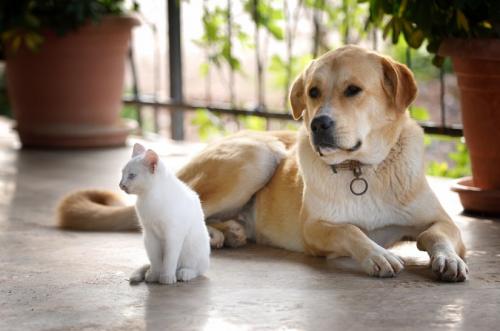 How to domesticate cats?

Cats were first domesticated in the Middle East for about 10,000 years ago. Modern domestic cats descended from their wild ancestor of the steppe cat. About 700 million living domestic cats come precisely from this species. Steppe or spotted cats lived in forests, until they moved to the villages. The ancient Egyptians worshiped to the goddess cat Bastet, and their favorite pets they mummified and buried with mummified mice.

Cats are unique and the only animals that are known to domesticated themselves. When people stopped nomadic life and began to engage in sedentary farming, they sowed mainly cereals. Harvested grains attracted various rodents, which in turn attracted cats. People watched for this and appreciated the contribution that cats made to control rodents. Over time, people began to keep cats closer to yourself, protect and even feed them.

Dogs are considered the first animals to have been domesticated. They are have been our faithful companions for over 10,000 years – a little longer than cats. Some scientists believe that the ancestor of all dogs, both wild and domestic, is a little Asian or the Indian wolf is a subspecies of the gray wolf.

How to domesticate dogs?

Dogs were gradually domesticated and tamed with food. AT the time when people still followed herds of animals and led nomadic way of life, they attracted the ancestors of dogs by the smell of food. These ancient dogs or wolves followed the camp of humans and fed food leftovers. When people realized that dogs can bark and to signal the approach of predators, they began to feed them. Since then, the dogs began to faithfully follow us and protect us from predators.