One of the most common questions asked by future parents and grandparents to veterinarians, it’s like introduce a dog to a child, especially if she has never before did not deal with children. The vast majority of dogs recognize children after a period of adjustment and curiosity. But, there are rare but high-profile cases when a small child received serious injury from a family dog. 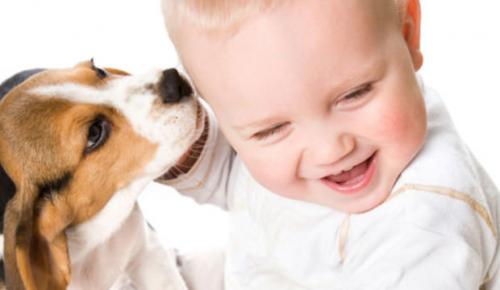 Is there any way to predict that the dog will be harmful to kid?

There are three types of dog behavior in which parents should be especially careful:

If your dog has experienced any such behavior, you it is necessary to consult with a veterinarian psychologist about how is it worth introducing a child and a dog. Veterinary visit psychologist doesn’t mean that your dog is “bad”, it’s just a way make their acquaintance easier for you and your pet, as well as for prevent any harm to the baby.

If the dog is well tamed and has never been aggressive, then do you still need to take precautions?

Fortunately, most dogs look at a child with curiosity and interest and do not show any signs of aggression. Nevertheless, some dogs may mistake a child for a strange mammal or even potential prey.

Dogs that have never seen a baby probably don’t consider him a human being. To prevent accidents, even with perfectly normal, not aggressive dog, basic precautions should be taken at any case.

What are the basic precautions?

The dog must be properly trained and able to obey Ideally, she should take formal training courses. For to achieve the best results, the dog needs to be trained obedience at an early age. Dog training should always start long before the baby is born.

The following steps must be completed:

Why should a dog execute basic commands?

The dog must obey the parents in order to be they were sure that when the child was near, the dog sits on a command or lies down, and remains in that position until the moment when she will be allowed to stand up. The dog needs both you should teach the team to “stand” so that it remains calm in any time.

How to model dog behavior related to child?

After the dog proves that it can remain in place and execute other commands, you can start to carry out some events that will happen when the dog and child meet first. While the dog is sitting or lying down, try to bring a doll wrapped in a blanket so that the dog sees it.

Accustom your dog to new noise, you can even turn on recordings some sounds made by children. The dog at this time should keep calm and get rewarded for it. If the dog starts get up, try using a solid no with immediate “sit”. If your dog cannot go through a simple simulation, perhaps you should continue to prepare it. You should not scold dog or threaten her. You should not associate these dog punishment activities. The dog should relate to this as a game, not an exercise or discipline.

How to introduce a dog to the smell of a child?

After giving birth, you can use some of it blankets or clothes so that the dog sniffs them and recognizes them at the next getting to know each other. Initially, the dog needs to be allowed to sniff clothes baby as much as she wants. But later, you should be taught the dog stay in place when you carry things baby or, for example, lay them on the bed.

What should be done when the child is brought home for the first time?

When mom returns from the hospital, the dog must have the opportunity to greet her without a child. May need restrict the dog or lock her in a separate room while mom put the child to bed. Later, when the dog greets parents and calm down, you can introduce her and the child. You can also let the dog sniff more baby’s items and clothes in for several hours so that she realizes that the child is in the House. Thus, the dog will begin to get used to the child, to his new smells and sounds, not even being near him.

How to introduce a dog and a child?

The best time to meet is when the dog and baby are calm. Ideally, at least should be present two people, one to control the dog and the other to control a child.

depending on the dog, the person who will hold the child, can sit or stand. The dog must be on a leash and sit, her it is also necessary to reward for it. In most cases better just bring the child to the dog.

Gradually, the dog and child need to get closer. Dog must see the child in advance, while remaining in a sitting position. The closest contact between the child and the dog can be continued as long as until she gets bored or the child becomes restless and noisy. These contacts must be repeated several times during the first of the day.

In the end, the dog can be brought close enough so that she smells the child, but not so much that she has an opportunity to bite him. This distance, as a rule, should make from half a meter to a meter. Resist the temptation and do not let the dog be in direct contact with the child and more lick it during your first dating. Baby can get injury in a very short time, so it’s better to comply caution. If the dog remains dating calm and controlled, you, at your discretion, can let her repeat dating already without eyeliner, but under close observation.

When can a dog be allowed to move freely housework?

The first time you can let the dog move freely, should happen when you hold the baby in your arms.

A dog should never have free access to a child. The child’s room should not be accessible to the dog in the absence of the hosts. Initially, when parents prepare to play with as a child in the presence of a dog, they must interact with her in a certain form. For example, they might say, “let’s see baby, “and ask the dog to sit down, stroke it and give reward.

It’s impossible to say with accuracy that the dog understands that the baby this is a man. Most dogs recognize and get used to the baby in for a few days while some others for this It may take up to several weeks. After the dog get used to the sounds and movements of the child (she will begin to not pay attention to his activities and will not be nervous at the same time), parents can weaken control over her. It also depends the dog’s past and its cases of aggressive behavior. it it is unlikely that an accident can occur even if the dog will not be aggressive, calm and relatively uninterested in the child. If you are worried, you can keep the door to the child’s bedroom closed and install additional doors in the house to prevent the dog from accessing to kid.

The general and most important rule is never to leave a child without supervision, especially under the age of three years. Be careful and always collectively decide to leave enough already adult child alone with a dog.

Most accidents when child injuries occur occur during the first hours and days of his presence in the house, or when the dog unexpectedly runs into him. It is considered that attacks on children are due to predator instincts in dogs.

To get used to the baby, the dog needs some time. There is no way to speed up this process. All first contacts must be supervised and the dog must not bind any punishment with a child. Under close supervision and with the help of patience most animals and babies get big friends, which benefits both of them!