From the tip of the nose to the tip of the tail, your puppy is a combination of the genes of their mother and father. Puppies generally resemble one of their parents, but some of them are born with quite amazing external characteristics. 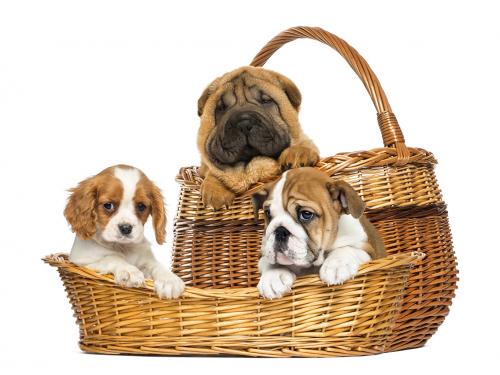 In general, a puppy has 78 chromosomes in each cell of its body, 39 from each parent. Each chromosome contains thousands genes. It is these genes or DNA that are contained in the chromosomes, determine the appearance of the puppy and its character. When parent genes are combined, one or another physical and behavioral traits of his parents. You might think that your four-legged buddy has a 50% chance of being like each of his parent, or will look like a combination of them. However, in reality his chances of being like one of his parents may be above or below 50%, depending on which genes each carries of them.

When the puppy’s parental genes mix, only a few determine its external data and behavioral traits. Dominant genes are always superior to recessive ones, so it depends on them, what traits your puppy will have, also known as a phenotype. In all diploid (paired chromosomes) organisms in the phenotype dominant genes appear.

Recessive genes tend to remain latent or hidden, if not combined with each other (hidden in the sense that they do not manifest themselves in the external appearance of the body). So these genes also remain part of your puppy’s genetics known as a genotype that will possibly manifest itself in future generations.

What is the difference between genotype and phenotype? Main difference consists in the fact that the genotype is determined by DNA research organism, and the phenotype is recorded when observing the appearance individuals.

When two dogs, both having dominant “BB” genes, mate, their offspring will have the same genes and will be very similar to them. The same thing happens when both dogs have recessive bb genes. However, when the puppy has a combination “Bb,” recessive and dominant genes, things get more complicated. Such puppies have a 25% chance that they will not be like any other one of the parents, and a 75% chance that they will be similar to one from parents.

The likelihood that your puppy will look like one of his parents depends on their genetics as well as hidden genes that may not be known to you. If you know the physical appearance and features the puppy’s ancestors, or his pedigree, then this can help you Predict what your puppy will look like when he becomes an adult. Puppies that carry genes for hereditary diseases or defects should not be used in breeding because of the likelihood that these diseases can be transmitted to offspring. Unwanted genes, included in the genotype, can appear in subsequent generations, as hidden recessive genes.