Cushing’s Syndrome (hyperadrenocorticism) is common hormone disorder in older dogs that may have significant impact on their quality of life. In this article you will find information on the causes, disease control and how to recognize that your dog might have been hurt. 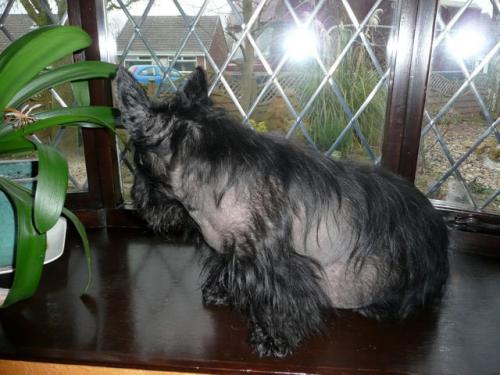 Cushing’s disease can develop either spontaneously or due to the long-term use of steroid drugs.

1. Spontaneous hyperadrenocorticism: with spontaneous adrenal cushing syndrome (glands located next to each kidney) dogs produce excessive amounts hormone cortisol. In healthy dogs, cortisol is produced in response stress and has the following effects:

Adrenal cortisol production in turn stimulates ACTH hormone production by the pituitary gland of the brain. In dogs with spontaneous cushing’s syndrome excessive production of cortisol causes constant stimulation of these processes even in the absence of stress, which leads to serious problems for the health of the animal. There are two reasons for spontaneous hyperadrenocorticism: 1) pituitary-dependent – accounts for 85% of cases, and is caused by a tumor the pituitary gland, which produces an excessive amount of ACTH hormone, leading to excessive production of cortisol by the adrenal glands. Although the “swelling” sounds threatening, try not to worry – in unlike aggressive cancer, such tumors grow extremely slowly and rarely cause any other problems besides the syndrome Cushing’s. 2) Depends on the adrenal gland – makes up the remaining 15%, when it is caused by tumors in the adrenal glands themselves. About 50% these tumors are benign, while others 50% will be aggressive tumors that can spread to other organs such as the lungs. Unfortunately, reliable diagnosis to distinguish between benign and aggressive tumors not exists.

2. The development of hyperadrenocorticism due to the use of medications. Cushing’s disease can also be caused by prolonged use of high doses of certain steroid tablets and drugs (e.g., prednisone), as well as ophthalmic or ear drops containing steroids that work just like natural cortisol. Therefore, it is better to use such drugs total in limited courses or low doses if not alternatives.

These symptoms may not be observed in all dogs, but the vast most sick dogs will have noticeable changes in their thirst and urination shortly after the onset of the disease. Skin changes and muscles tend to occur a little later.

If your dog has any of these symptoms, then it’s better. just make an appointment with the veterinarian as soon as possible. At untreated cushing’s disease may cause further complications such as diabetes. If you think your the dog began to drink noticeably more, then you can measure which the amount of water she consumes. This information will help a lot. to the vet. Use a measuring cup at the beginning of the day to record The exact amount of water that you poured into the dog’s bowl. Then, at the end of the day, you can determine the amount of water that it remains, and you only need to calculate the water that the dog drank. If the dog is very thirsty, then you probably will have to replenish the bowl. Water consumption should usually not exceed 100 ml per kg body weight over a 24 hour period. remember, that your pet may start drinking more water in case you change his diet for dry but excessive water intake is still help confirm that the flow rate is still too high. Also, a useful sample for your veterinarian can be your urine sample dogs collected in the morning on the day of admission. However, unfortunately, neither one diagnostic test that would guarantee 100% diagnosis only with a urine sample, so the vet will have to do several other tests. Commonly used blood test, with which you can exclude any other diseases that may be causing the symptoms. Maybe, the dog will also need an abdominal ultrasound.

1. Pituitary-dependent Cushing’s syndrome: for treatment requires taking a drug containing the active element trilostan. Treatment aims to suppress the production of cortisol. Drugs usually require daily intake throughout dog’s life. Symptoms generally decline fairly quickly, often in during the first 2 weeks after starting treatment. Dog will need regular examinations and blood tests to make sure that the medicine works and does not cause any side effects or complications. A blood test is usually done after 10 days of admission. the drug, after 4 weeks, and then every 3 months. Forecast The treatments are usually good.

2. Cortical adenoma or adenocarcinoma adrenal gland: treatment of dogs with adrenal gland disease is more complicated. Often in these cases, treatment is best started. with the help of a qualified veterinarian, at least at initial stages of treatment. There are essentially three treatment options: surgery to remove an adrenal tumor, treatment with mitotan to suppress adrenal function, or treatment drugs that reduce the symptoms of the disease. The forecast is pretty changeable and depends on the prevalence of the tumor. Your vet should frankly discuss with you all treatment options and related with them all the pros and cons.

3. The development of Cushing’s syndrome due to admission drugs: in most cases, symptoms pass after a simple discontinuation of the drug. However, very it is important that the discontinuation is gradual and with veterinary supervision, since a sharp cessation of admission may be dangerous and even potentially fatal. Never stop taking medication without prior discussion with your veterinarian.