Chocolate Labrador, one of the three most common the colors of the breed were once seen as an ugly duckling, but today, on the contrary, it is considered one of the most beautiful. With its attractive character and desire to please chocolate labradors, along with black and fawn (red), earned their place in the hearts of millions of owners. 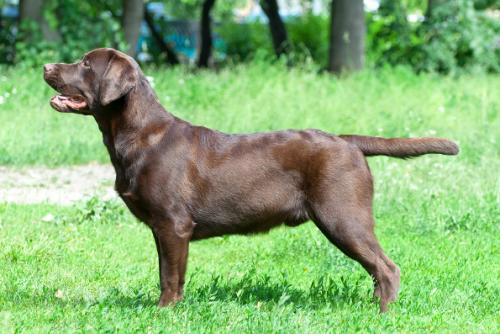 Chocolate Labradors were bred at about the same time as black and fawn. However, in the early 20th century, in 1903, were only black labradors are recognized, and the other two colors, fawn and chocolate, were recognized only at the end of the 20th century. The fact is that these colors were not considered good enough for display.

Chocolate color is not inherited as simple recessive gene, which complicated its breeding by breeders. Many breeders are faced with the difficulty of determining patterns breeding these dogs for consistent chocolate color.

The color of these labradors ranges from light to dark chocolate. On the chest of chocolate Labrador Retriever white marks are allowed, but according to the breed standard they are not desirable. Tiger color or tan is not allowed. Saturated the color of the chocolate shade together with the short labrador coat makes this color is like velvet or velveteen.

Bright eyes used to be a frequent problem for chocolate breeders. the labs that tried to achieve black or brown eyes, because by standard the eyes should be brown or hazel. However, the chocolate color and the bright eyes of such colors as light brown, green or golden yellow give the dog really eye-catching look and contrast that you like to many breed owners.

Like all labradors, chocolates are cute and soft. character. Eyes really are a mirror of the soul of a Labrador. Kind and friendly, their eyes will tell you the whole story of this attractive and amazing breed. Perfectly designed, this the dog also has enough stamina and energy, which among other things makes it a successful companion for hunting. Easy-to-learn, chocolate labradors excel at agility and obedience.

Well balanced and very reliable, these dogs are used in a huge number of areas: starting from search and rescue and ending with guides for the blind and people with disabilities opportunities. In addition, their intelligence, soft behavior and high adaptive abilities made them one of the best family dogs. Labradors Retriever are one of the most popular dogs. in the world and invariably occupy the highest places among the majority dog owners according to many polls and statistics data.