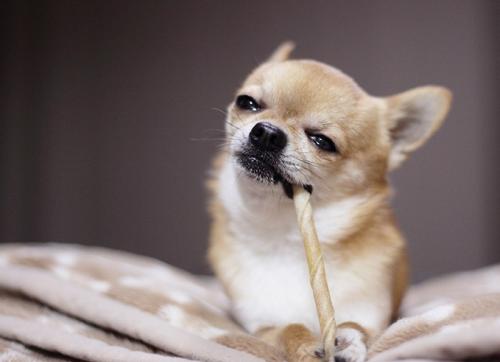 Chihuahua is one of the smallest dog breeds, which in according to standards should not weigh more than 3 kg. Small breeds grow faster than large ones and your chihuahua will be close to to his adult size when he turns 6 months old.

The weight of your newborn puppy is a good indicator of it adult size. Chihuahua at birth in most cases weigh between 80 and 200 grams, and heavier puppies tend to weigh more when they become adults. Comparing your size puppy with other puppies from his litter, you can get rough assessment of how big it will be in relation to others chihuahua.

Although most chihuahua growth is determined genetically, it is also influenced by some external factors. Puppies which in the first weeks of life more often receive good nutrition, usually grow faster. Healthy puppy diet after weaning him from his mother may also affect its growth rate. Puppies that don’t get enough food or who get poor-quality food may ultimately be smaller. Not less, overfeeding can lead to obesity. On growth also often affected by illness and disorder. Chihuahuas who were sick in during the first few weeks of life, usually several less than their peers.

How to evaluate adult size

Chihuahuas grow most rapidly until the age of about 12 weeks. Thus, good nutrition and proper care especially important during this time. Your dog’s growth will begin slow down from 12 weeks to 6 months. By 6 months your the dog will be close to its adult size. Chihuahuas are considered adults and fully formed at the age of 1 year.